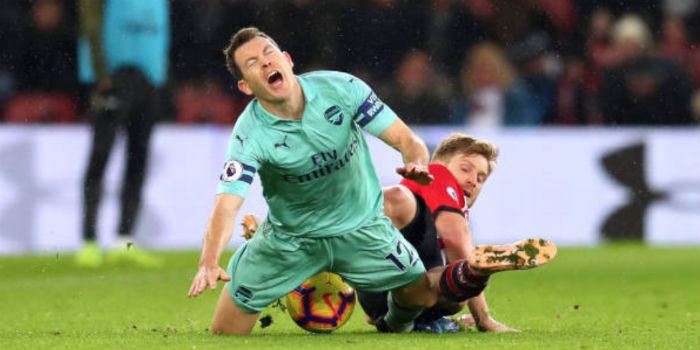 Unai Emery will be able to select Stephan Lichststeiner and Sokratis for tomorrow night’s Carabao Cup quarter-final with Sp*rs, but it looks as though Sead Kolasinac and Shkodran Mustafi will still be sidelined.

Arsenal’s latest medical bulletin confirms that Lichtsteiner, who went off in Sunday’s game with Southampton, has returned to training. Sokratis is available after serving his one-game suspension.

Shkodran Mustafi also served a ban at the weekend, but the hamstring problem picked up in the 4-2 win against Sp*rs remains a cause for concern. The German is being ‘assessed’ but you’d be surprised if we risked him.

Unai Emery suggested in the aftermath of Sunday’s defeat at Saint Mary’s that Hector Bellerin was facing a couple of weeks out of action. The right-back picked up a calf problem in the second half and had to be replaced by Ainsley Maitland-Niles. He, like Sead Kolasinac who missed the trip to Saint Mary’s with a tight thigh sustained in training on Friday, is also undergoing further tests.

To compound matters, Emile Smith Rowe, who might have been expected to get game time, has a hip problem. We’re also without long-term absentees, Dinos Mavropanos, Rob Holding and Danny Welbeck.

If we decide to go with a three-man defence tomorrow, we’re guessing it could be Sokratis, Koscielny and Lichtsteiner, flanked by Monreal and Ainsley Maitland-Niles (or Carl Jenkinson?). Ideally, you wouldn’t be subjecting Koscielny to a third game in a week at this point in his recovery, but we’re short on options.

Young centre-back Zech Medley played for the under-23s last night, so he’s seemingly out of contention which leaves Julio Pleguezuelo, who made his debut against Blackpool in the Carabao Cup in November, as an alternative.

There’s also the possibility that the boss will stick with Granit Xhaka in defence or use someone like Mo Elneny, who played there a couple of times under Arsene Wenger, to bolster his numbers.

Whoever we send out there, let’s smash them!

Don’t use Xhaka in defence, play to our strengths.

Kos will get better but Lichsteiner doesn’t look good to me.

If we stick with the 3-4-3 formation, we need Xhaka in midfield more than ever.
Since it’s the cup, I wouldn’t mind seeing Pleguezuelo.
I also think Özil and Ramsey should play even though we know they don’t really work in many systems.
Just try to use as many fresh players as possible while still maintaining a level of experience.
Even Saka I wouldn’t mind at some point.
Give Poch something to think about…

Poch is thinking about moving up north or abroad in the summer!

Mavropanos…come on guy, get fit.

It was a bit surprising not to see Elneny play in a back 3 against Southampton instead of Xhaka. He did play there a few times last year. Seems he has really fallen out of favour.

Emery doesn’t trust him there obviously. But he would have been better than match-rusty Kosh.

Did you see how shite he was against Carrier Bag? No surprise. Would be nice to see him get back to form, but….

Still more match fit than Kosh. Never presented it as an ideal situation. Ksoh was clearly not ready.

We must be relaxed on this Qarabag Cup thing. Considering the injuries let play the U12 youngsters. Risking Kos is a very bad idea because there is the PL, the FA and something in the EL.

It’s against the shite tho..

I’m all for intensive youth development, but chucking the 12-year-olds in at the the deep end like that? Bit harsh.

They might be in with a good chance, mind!

I think/hope he’ll go with Pleguezuelo, he played well earlier in the competition and deserves a shot against spuds

If Elneny had been given some game time earlier, he would be a good option for this match. I don’t want to see Koscielny suffer like he did on Sunday.

In other news, Maureen has been sacked by Manure with immediate effect. Woohoo!

How is that good news?

A Different George
Reply to  yen

I am an Arsenal supporter, obviously, but I care about football. Mourinho sucks all the joy from the game, both on the pitch and off it with his poisonous disrespect of his own players, his staff, other clubs, the tradition and history of the game. I thought our draw with Liverpool was one of the best matches I have seen this year, in part because Klopp is, in all the ways I mentioned, the opposite of Mourinho, as was Wenger and, I think, as is Emery. So I am happy Mourinho is gone, and I would like to see Arsenal… Read more »

His attempt at mind games with Klopp prior to their game was so typical and Klopp shot him down in flames with very little effort. And even more so by beating his lacklustre Man U. They sacked him not a moment too soon.

No problem. Ed Woodward is still in place. Through all their tribulations since SAF retired, who is still there?

No. It’s just that Man U sort of sounds like Manure if you really stretch it out.

Nothing to do with Munich.

I want us to smash spurs, but I think those who simply want to beat them for a meaningless cup are aware that they are open to sacrificing our players at the alter of the injury gods for the sake of it. Right or wrong, just be aware. If we’re throwing Kos in again, Torreira, Xhaka, etc. we’re doing so at the risk of potentially losing them really soon due to the workloads we’ve been carrying. You really wanna lose Torreira for any period of time, for the sake of the game tomorrow? I’m not so sure. I’m not saying… Read more »

I agree…we all hate Tottenham and don’t want to give them any chance of success, but our success is what really matters and we can’t afford to lose any more players, if only because I don’t want to see Unai playing players out of position. It didn’t work for our greatest manager so it isn’t going to work for our new manager who is finding his feet in the PL. Also last season’s Carabao cup adventure probably did us more harm than good in the end. The ignominious defeat to City completely derailed our already rocky road to try and… Read more »

League Cup is meaningless. We should really just go youngsters all the way. Then we have an excuse. If I may I also think it would be a bit of an insult to them: go on and win the League Cup, we didn’t give a toss about it.

Talking out of my ass but I think Matteo could do a job at CB
Tall, strong, fast, can read a pass and make one under pressure… the attributes seem to be there

Yep, definitely talking out of your ass! Matteo is young, skillful and strong for his age but center back against Kane? Let’s not get carried away. This is not FIFA

Would be my selection. Rest all current first teamers who played 90 min at the weekend (exc. Guen, rest this weekend) and will need to play 3 games in 7 days starting at the weekend. Don’t think it’s worth risking Kos or Monreal at the back.

Might be tetchy at the back but should have plenty going forward.

Looks good but i would like Kos to restore match fitness so playing him would be cool. Also Julio over Lichtsteiner. Might not risk Papa for the coconut cup but he didn’t play at st marys so….really difficult task because spuds definatley gonna take shit serious after the 4-2 and since this might be their only chance to win anything in this century.

I wonder if we might go back to the four at the back. I feel we’ve been digging in a lot more with the formation when we might have needed not to bar the Spurs game. A defense of Monreal Lichtstenier Sokratis and Koscielny is old but solid looking. Kosc still needs the minutes. Can leave us play Xhaka and Torreira in the centre and give us plenty of options to choose from going forward.

Alright, no one’s talking about it, but I’m gonna say it: Bouldy needs to take a bow. Old school Gooner Great and all but I can’t help but think he’s milking that. Great players are often shite coaches and vice-versa. My hope is that R&S are looking. Defense need proper coaching. Take a look at the replays of the goals and it’s just embarrassing Bellerin is a good case study. He has really responded well to Emery’s coaching by being more aggressive on the ball. But the guy can’t defend for shit, and though I’m really glad he’s getting wingback… Read more »

Can’t we bring back Chambers from loan like we did Coq?

Might as well, he’s going F all at Fulham.

I’m guessing if we play Monreal, we may revert to a back 4 given paucity of choices at Cback as well. So we could see possibly Lichsteiner pair with Sokratis which is a very old pair. On the right side Maitland-Niles for me over the limited Jenkinson given level of opposition. That was we can play Granit next to Torreira in midfield. Up top probably Iwobi left side simply bc he will give MOnreal sufficient cover over say Aubameyang. In the centre maybe Ramsey or Ozil and left side for want of better choice Mhkitaryan (albeit he has weighed in… Read more »

What message does it send the likes of Pleguezelo when we prefer to use players out of position rather than a specialist centre back. How are the younger players going to have a chance or get experience when they are not used when needed.

I hope we’re not going to risk our first team defenders for the Carabao cup, when we have a so many games to deal with over the Xmas period.

Why is there no recall clause for Chambers? Is this normal for loan contracts?