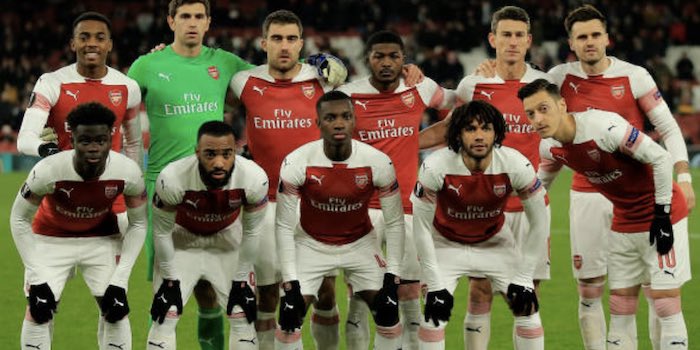 Arsenal continued their unbeaten run and took three points as an Alexandre Lacazette goal gave them a 1-0 against Qarabag at the Emirates this evening.

Unai Emery handed a first start under his reign to returning skipper Laurent Koscielny, while Mesut Ozil, Sokratis and Alexandre Lacazette added first team quality to what was otherwise a young side including a debut for exciting forward Bukayo Saka.

The tone of the game was set from the first whistle, lots of Arsenal possession as the visitors sat off, and the Gunners had the first attempt on goal when Saka’s curling effort was well saved by the keeper in the 9th minute.

It wasn’t long before we were ahead, taking the lead in the 17th minute. Eddie Nketiah won the ball back, Ozil fed Lacazette in the box, he took a couple of touches, nudged it wide, then lashed the ball home across the keeper. 1-0.

It was pretty much all Arsenal, Qarabag had a couple of corners but showed little else in attack. From an Arsenal corner Nketiah headed over in the 37th minute, and little else happened beyond Stewart Robson’s masterclass of misery on co-commentary so Emery’s side took the 1-0 lead into the break.

There were no half-time changes and the second period began with a Maitland-Niles shot which flew over the bar. Jenkinson had a pop with his left foot but it was blocked, and the defender was at fault with a bad header back to his keeper which Martinez couldn’t keep in. From the resulting corner the Spaniard came and got nowhere near it, but Guerrier headed over.

Qarabag had a good chance to equalise just after the hour mark, a good break down the left saw the ball come to Abullayev but he mis-kicked inside the box. Emery made his first change a minute later, bringing on Zech Medley for goalscorer Lacazette, playing him at left back and pushing Maitland-Niles into the front three on the right hand side.

Good work from the versatile midfielder created a good chance for Saka but his shot was deflected wide, before the 17 year set up Ozil for an effort which was blocked. Saka had an other shot which was easy for the keeper, and in the 72nd minute Nacho Monreal came on for Koscielny who got good minutes under his belt.

Nketiah had the ball in the net after a good cross from Saka but the goal was ruled out for offside, before Emery made his final change bringing of son of Pink Floyd Charlie Gilmour for Mesut Ozil.

There was a chance for Saka to become the club’s youngest ever European goalscorer but with just the keeper to beat he smashed his shot straight into the face of the keeper from 8 yards out.

All in all, not a vintage night at the Emirates, but a goal for Lacazette, an assist for Ozil, a successful comeback for Koscielny, and some nice flashes from the young talent.

Lacazette: I’m happy but we were lucky

I’m not sure what Zech Medley has more of, technical ability or confidence, but boy can he play
Nketiah was offside, but what a headed finish
Hard to believe Baka didn’t mark his home debut with a goal
These kids can play!

Also, AC Milan crashed out of the competition today.. Gazidis out?

Not the best game, but was to be expected. Happy with the kids that played today, specially Saka, quite liked what I see today from him, one for the future indeed.

Also, big plus to have Kos back again

Impressed with Saka. Kid deserves a runout in the first team.

He just had a runout in the first team…

He’ll be gutted about that missed chance, 8 hope it doesn’t knock him too much

He’s young and saw the headlines I think. Plenty of time to calm down.

I meant in the first choice 11. Surrounded with the best arsenal players. He’ll have an even better impact.

What an absolute rollercoaster. I can’t wait to buy the DVD.

What were you expecting?

Nothing much, just having a tiny dig at that bunch down the road and their fondness for bringing out DVDs.

Comfortably numb is what i meant to say

no replies?? is there any body out there…

That joy and smile on Kos’s face when he was subbed out; it brought happiness and warmth to my heart

I lost count of the number of times the commentators said they’d expect to see mustafi and sokratis start against Southampton.

So heartening that I’m getting value from quality commentary for my extortionate monthly subscription. Oh and can someone please tell both Sky and BT that during the game we want to see what is going on on the pitch rather than 30 second close ups of ugly men shouting and spitting while the ball is in play elsewhere.

And I write this as an ugly man, for avoidance of doubt.

Plenty of youngsters on show and did well.

Some senior players returning from injury got minutes.

Saka made the most of his opportunity to impress. Willock was sloppy, sokratis was commanding expectedly and Lolo was unruffled. Glad he came out unscathed. We know what AMN brings to the table when he’s in advanced positions, the confidence on that kid. Impressed with Medley.
Feel for Eddie as that offside goal was a beauty of a goal. Enjoyed the match regardless of the scoreline

Clean sheet the biggest plus for me

Are we not unable to get celtic? Thought uefa banded British teams together, correct me if I am wrong

I think (I’m often wrong) that it’s clubs from same association that can’t play each other.

celtic and arsenal arent from the same association . scottland and england have separate FA, that why britain cannot have a british team at the olympic, it become a shit show with the 4 british FA cannot agree to anything

I want BATE just for Hleb.

Just for the Hleb of it

Maitland Niles has got real ability, I’d really like to see him given a steady run playing in front of Bellerin

They refused to ever just say “Sokratis” either, which was great.

But amn looked like the real deal as usual. Calm, focused, great vision.
I think we looked more dangerous with him in the front 3 that we did with Laca or ozil.
That’s not to say we didn’t fashion chances before and of course we scored with those two.
But tiring legs and Amn ability to burst past players seemed to hit them time after time in the last half hr.

Definitely not most intense game we’ve seen but glad to see Kos back & especially big smile on him when he was coming off! Congrats to the young lads too… Saka, Eddie, Willock and the rest, few small slips up here and there but the potential is huge!

Let’s not forget about our almighty GOAT Lord Jenko.

Every 3 points will be crutial now not to slip away from the top 4 in PL… Keep up the good work lads.

Thought Willock was pretty good tonight. The amount of times he ran at them to get the ball, without sliding, seldom with a fould. Very quick and pretty strong already. Was better than Elneny I thought.

I have to disagree, Elneny looked solid in his position, very aggressive off the ball and simple on it, didn’t give the ball away once, Willock on the other hand gave the ball away a lot. Love how Willock can go past a player but tonight he did some silly stuff which wasn’t needed,
Like holding onto the ball and getting disposed and not playing it quick enough. Imo

Maitland Niles is almost too composed at times but i enjoy watching his coolness. Medley looks exceptional, very impressive cameo like last time. Thought Willock was quietly excellent despite a sloppy 10mins in the 2nd half. Nketiah and Saka were lively and aggressive. Bit more polish and they both grab a couple of goals and assists.
Kos was so happy

Saka has got all the ingredients. He just need to play in his moment with simple ideas.

That was an extremely forgettable game…happy we won it though…

And no one got hurt!

2) Koscielny back in, looks like a back 3 against Soton with Lichsteiner-Koscielny-Monreal

No temper tantrum then or wantaway in January contrary to the always ‘correct’ tabloid press.