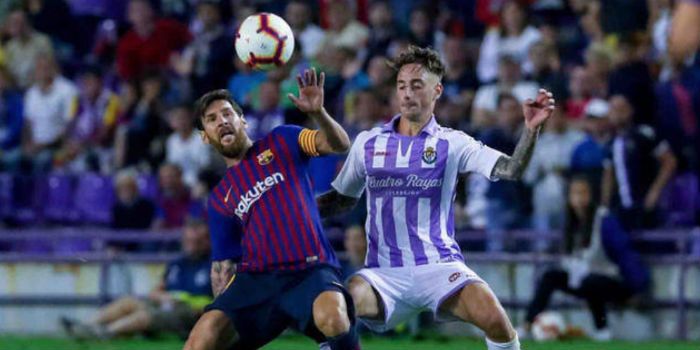 According to Cadena Ser in Spain, Unai Emery is assessing a January bid for Real Valladolid defender Fernando Calero.

The 23-year-old, an ever-present in La Liga this season, has been linked with a couple of big clubs, including Borussia Dortmund and Sevilla. Interest is particularly hot right now, as it’s said he has a clause in his contract that means he’s available for as little as €11 million next month.

Having just lost Rob Holding for the rest of the season and with Dinos Mavropanos still sidelined, the Gunners are short on bona fide centre-backs at the moment.

Laurent Koscielny is set to make his long-awaited return from injury this week but at 33-years-old there are doubts about his long-term future. It means, much responsibility currently rests on the shoulders of Shkodran Mustafi and Sokratis, both of whom will be suspended on Sunday when Arsenal travel to Southampton.

It’s a bit early to tell whether we have any real interest in Calero but you’d expect us to be assessing a few names ahead of the January transfer window opening in three weeks.

The Dortmund link is interesting…we can only assume Sven’s wholesale bugging of the Westfalenstadion is still paying dividends.

Mislintat on his Arsenal exit and the Gunners new recruitment policy

Sounds a good price, his team have conceded the 4th lowest goals in the Spanish League, which is pretty good for a team that is 12th out of 20 in the league.

Would like an update on Dinos. Still don’t fully know what happened to him and when he’ll be back.

He got injured, he’ll be back when he’s healed ??‍♂️

Hehehe so underrated this one. Bang on!

Groin injury. Was supposed to join the squad this week in training (the team said “in December” so make of it what you will). Even if he’s training, I’d be surprised to see him play on Thursday or Sunday.

Arsenal need not to sign a defender for the sake of injury crisis currently they have in their defensive line, if they sign one proper defender in January transfer window who is ready to play in the first team along with Arsenal’s style of play then that’s a fair enough transfer business for Arsenal.
Then we move on to the summer transfer window where we can buy another defender who can replace Koscielny/Mustafi, and a winger on right side(I hope Reiss Nelson will come back into the team next season) and Aaron Ramsey’s replacement.

Our top 4 finish (above Spurs preferably), may depend on a decent defensive signing in January. This guy seems to have what it takes and looks much better than a panic buy.

Go for it!!!! We need a quality defender for the rest of this season and the long term. This guy looks the right age and I trust Emery’s judgement.
Then we can offload Mustafi this summer.

Mustafi has a deadly header. He is the No. 1 threat on offensive corners. Those who want to say he is No. 1 peril on defensive corners, you can say it.

A goal scoring centreback is always nice, if he can continue improving then Mustafi could be a vital player for us

Mustafi is one of those players who makes at least one big error in every game. Sorry, but he’s a liability. There’s much better than him out there.

He needs to make better decisions on going to ground. If he fixes that he’ll have made major improvement. Every match he’s got 2 unnecessary free kicks and 1-14 unnecessarily sliding himself right out of the play in him.

Not a fan of mustafi but doubt we’ll be able to sell him this summer because kosielny is already leaving. Replacing 2 cbs in 1 window is a big ask.

Sometimes I wonder how amazing Gabriel would be under Emery. He was a good defender and I think maybe he’d like it more with Unai and Torreira around

He was terrified when the ball went in the air, remember that Andy Carroll hat-trick for West Ham and Marcus Rashford away at Man Utd. Think he suits Spanish football more. Think he’s good at knicking the ball, one on one defending, more interceptions and tackling. Struggled with the more physical side of the game

I always thought getting rid of him was a mistake. He wanted to stay and felt he didn’t get enough chances. Hard to say if it would have worked out in the long run though, he has some mistakes in him as well.

Oh.. I thought he mostly left because he felt homesick

If we buy a young defender like him then it would suggest summer outgoings. Presumably Kos and Chambers I should think

But Chambers just signed a new contract. Anyways, I think Ranieri is using him as a CDM. So let’s see how well he develops this season, I like Ranieri. And I hope Chambers comes out of his through this season

Renieri and Fulham will get relegated. Calum’s second relegation on loan. Hopefully he can learn something along the way.

If its anything to do with Dortmund then its probably true! Seriously though we probably will not move for a defender unless it becomes acute. We already have too many players in the position on contract to add another. We will want to move some on at least before we add again. Koscielny will retire end of season. Mavropanos could still do with development (IMO) on strong loan. That leaves Sokratis-Mustafi-Holding first choice (Holding of course medium term injury) BUT we also have Lichsteiner and Monreal available till summer to come into a back 3. If anything back 3 suits… Read more »

Not to mention there is also Chambers still on the books on loan and we will also need to consider Brexit impact to local content.

Have to admit though has great tekkers and useful height, plus a very attractive price if to be believed.

I guess if Koscielny is retiring, Mavropanos goes on loan (at 20yrs) to develop, Chambers sold, we will have Holding, Mustafi, Sokratis and Calero.

At fullback : Sell Jenkinson (if there is a buyer), Lichsteiner retires. Bellerin and Klasinac with AMN alternating either side. maybe keep Monreal one more year.

Why not recall Chambers?