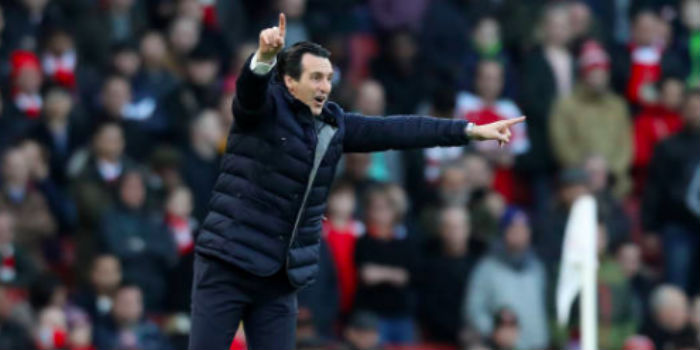 Unai Emery says Arsenal are open to doing business in the January transfer window but only if they can find players who are able to help them.

It’s no secret that the Spaniard is eager to bolster his defence with a new signing this month, however, with funds set to be limited, he’ll be hoping that Sven Mislintat and Raul Sanllehi can put their contact book to good use to bag a bargain.

“It’s not easy, changing and improving our team in the transfer market,” said the Spaniard after his side’s 4-1 win over Fulham, a result that temporarily closes the gap on fourth place Chelsea to two points.

“But the club is working, we are watching different possibilities because maybe we can, if the transfer market gives us opportunities, sign one or two players. But it’s not easy.”

The Gunners have been linked with a loan move for Chelsea’s out-of-favour centre-back Gary Cahill. At 33, he’s not a long-term solution, but he could potentially do a job until the end of the season when additional funds will be made available to the recruitment team.

“We didn’t speak about him,” was Emery’s response when asked specifically about Cahill.

It would be surprising if Chelsea were to lend us a hand when the race for the top four is so tight, but stranger things have happened. It’s hardly surprising that Emery is keeping his cards close to his chest right now.

Sounds better than I was expecting ie no signings.

Let’s hope the new management team does some magic in the window.

He wouldn’t exactly come out and say we aren’t signing anybody now, would he? His words were meant to pacify the fan base. You sound pacified.

Crikey, who pissed on your cornflakes?

Where is Mavropanos by the way, he’s been injured for 6 month?? Still no sign of him getting back on training?

There were pictures of him being back in full training with the first team earlier this week. Hopefully he can play soon. Greek CB pairing Sokrapanos to the rescue!

When dealing with Shtan, the correct approach is to say “yeah, I reckon we’ll need about 7-8 new 50 million pound players this January to deal with the crap decisions made prior to my arrival.”

Then a) the fans are made well aware that the manager is not deluded and b) you put yourself in a decent position to atleast get two or three instead of Kim Kallstrom as the clock strikes 12.

He’s a quick learner Unai, he’ll get there. Shtan – take your cost-cutting and shove it.

Loosing both Bellerin and Holding has been a blow hasn´t it? Then we “lost” Mustafi, yeah I know not a big blow but what I´m trying to say we lost stability – we did go 22 unbeaten. Now Kos is back and Bellerin and even Monreal so I´m not that worried. What we do in the summer window will be crucial.

Kos was starting to look like himself yesterday, if you know what I mean.

Every window is an opportunity. Emery must know by now he can’t achieve his goals with this squad. The players got a new chance to prove themselves with the change in manager and many have failed.
We must buy whenever we get the right opportunity.

Not something we really hear during a transfer window. Can only be a positive, rather than spending a month in anticipation and ending up with nothing.

I think this is something we have heard before tho.. “If we can find, one or two super quality that can help us, we will do it”

It is a light relief to chuckle at some of them statements of wonder from Le Prof.

Obviously there was no one out there better than what we had. It was Arsene’s way of saying “yeah nothing happening.”

No Cahill then. Probably best…

I’ve tried to get my head around Cahill “helping” us, but my natural instinct to hate anyone that plays for Chelsea is standing in the way of that. Hearing Emery say that they haven’t spoken about him has cheered me up no end.

He has that classic Chelsea prick about him so I don’t like the guy. Didn’t know he was 33 either. We have enough ageing players and being only a year younger than Lichtsteiner…….no thanks!

A defender. A wingman. Wingman; Helder Costa at Wolves Surly March at Brighton Gray at Leicester No one should say to me these aren’t better players on the wing than Mhiki. How are we not looking at Costa ffs? I don’t understand the scouting these clubs do. This guy will be a world beater soon, and we’ll be one of 4 clubs willing to pay an exorbitant transfer fee, while there 4 or 5 other clubs ready to to top that significantly. Why don’t we go in now and snap him up? It’s very obvious we need dribblers who can… Read more »

I’m not a massive Henrikh fan, but none of those players are better than him, they’d all struggle to make the step up. Costa is a reasonable talent I suppose, but even if he manages to add more final product he’ll only realistically reach Mkhi’s current level. If his transfer fee balloons and a big club signs him up, so be it, he won’t be worth it. We need to aim for players with much higher potential, even if they’re not currently ready to make a big impact. Play a longer term game. Wenger’s youth project only failed (in comparison… Read more »

I’ve asked this before. What are the names we could or should look for? Anything in la Liga, Bundesliga, Ligue 1 or Serie A?

Cannon and Ball and Arse'n'all
Reply to  Twatsloch

All of these are realistic, perhaps with the exceptions of Aouar, Mendy and Jovic, who will go to someone like Barca.

Better get defenders with pace. There are plenty around including some raw diamonds.
The defence is a joke of the epl. Time after time it has been ripped to pieces thanks to a hdl and the FM’s refusal to get a defence coach. His condescending attitude of I know best is the repeated failure at the closing stage of epl title fight and his heavy losses to the big 4/5.
Hopefully Emery being more pragmatic and less arrogant can put the defence
in place to fight for the cl place.

Which is what I said. We need 3 positions – Rwing, CM, Cback. We will likely get two. If we sell Ramsey its potentially 40m and we can add on a bit from the kitty. Maybe we can sell Jenko and Elneny as well but that’s likely not to fetch terribly much even if we find a buyer. Potentially if we have to spend significant money on our ‘modest budget’ for one, we may bring the other in on loan. Houssem Aouar (Lyon) looks interesting. Fekir will cost considerably more. Ndombele we should have tried to get last summer. Pepe… Read more »

Going for older players with no resale value but do provide ready quality could be a good option for us. Quality for little money. And probably a season and half of good football contribution.

I really trust Emery’s transfer market acumen. Along with Sven, they both could find us some gems.

But… like… how does signing an out of favour defender from our direct league table rival make us better? I don’t understand.

As a fan u would always like to see the best of players playing for us or a team who can play like the The Arsenal of old where we were quality all over the pitch. I look at the current squad and can like others point out the players I would not want in the squad and have in the past always pointed out players I might like, to be honest some turned out to be not that great. I think most of us here wanted Seri a couple of years back, he just played yesterday against us for… Read more »

Chelsea just bought a winger (Pulisic).
Top teams splash the cash immediately when they identify a weakness in their squads.
Note how they already have decent wide players. And if they sell Hazard (you bet with a high sum) they will invest even more.

Fabregas In, (if) Ramsey Out.

Did you hear Graham on Arsenal Fan TV discussing the defender he wants brought in to fix our defense is Harry Maguire…. He’s imposing, knows the premier league and is a very good defender. Your thoughts?

Pulisic to Chelsea for 60 million. That is Ramsey and Welbeck sold last summer. Imagine the amount of sponsorship money he will generate from America? Continued mismanagement of our club.

Recalling Chambers back from loan? He can cover central and right defence. Even played as DM before. Will settle down in the team directly without problem. Spend the money on a striker, can’t just hope for Laca and Auba not to get injured while Nketiah not ready yet. We are still in three competitions. FA Cup and Europa, plus the league.