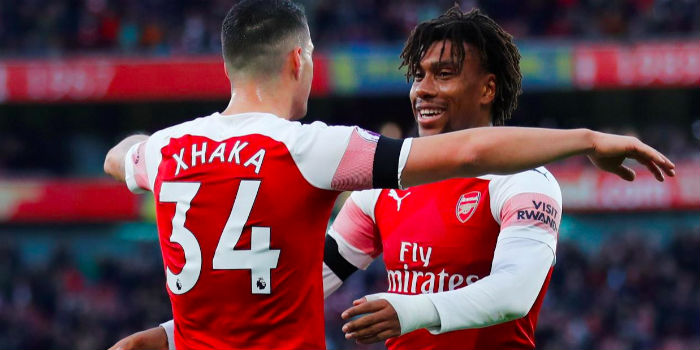 Arsenal’s 4-1 win over Fulham was a great response following the defeat to Liverpool says Alex Iwobi.

Having been humbled 5-1 at Anfield three days ago, the Gunners knew they had to start 2019 with a win to keep up the pressure on the top four.

Goals from Granit Xhaka and Alex Lacazette put the Gunners in charge before the hour mark before Aboubakar Kamara pulled one back for Claudio Ranieri’s side. Substitute Aaron Ramsey restored the Gunners two-goal advantage with 11 minutes remaining before Pierre-Emerick Aubameyang sealed the point.

“It was a good performance from the team, and a great response after the defeat we had [at Liverpool] so it was a good result,” said Iwobi.

He added: “They had a few chances and a few good spells, but we were resilient and able to ward them off.

“We had a few chances and with the attackers we have, we will always have those. But we were able too get four and that is enough for today.”

Iwobi, who assisted Xhaka’s opener and formed a dangerous partnership with Sead Kolasinac on the left flank throughout the match, also made clear that Unai Emery’s players have not dwelled too much on the recent trip to Merseyside.

“We just picked ourselves up in training and you just have to forget about the past but learn your lessons,” he noted.

“You could see today that we played with confidence and did well.

“We like to make sure our opponents are scared to come to the Emirates, and we have kept that going and it’s a great win for us and for the fans.”

The midfielder also set out the team’s ambitions for the year ahead as Arsenal chase a return to the Champions League.

“To keep on having performances like this, keep strong and take it step by step and see where we are in 2020.”

Iwobi is winning me over, his workrate is very good, and despite his erraticism he’s regularly produce key moments in games, he’s still only 22, hopefully he can start adding goals over the next 12months, he’s really kicking on this season

Thanks Iwobi, can you tell us stuff we don’t already know? We got hammered by the red scousers, and beat the mighty not-chelsea lot. Sums up where we are at the moment. Think we are lucky to be fifth tbh. I hope for a signing or two (not Cahill please), but doubtful we will.

Would you care to comment on your passing ability?

Some good. Some bad. What we need is some consistency throughout the team – of the good variety. Will take the win today though. Nice start to 2019.

Ozil’s dribbling ability? Or ball retention ability? Or some sort of fucking awareness when without the ball? Iwobi in the team over Ozil everyday. At least, when he has the ball you know he can make something happen ALL ON HIS OWN. This kid is allowed to have a few lapses. He’ll grow into his full self if he has the right coaching and support. You see him playing great incisive passes albeit inconsistently. He’s a bit like Ozil in that regard. Only Ozil is inconsistent in all parts of his game when he is inconsistent. Iwobi gets poor with… Read more »

Would the rest of the team comment on their dribbling ability? Ball retention ability? If we had two of Iwobi in the midfield we’ll be a much better team and a greater threat going forward. Everyone accepts the downsides of members of this team except the downsides of Iwobi. True he makes the occasional poor passing decisions, but no one applauds the great ones he makes. Xhaka for his vision and distribution is slow, weak, and sloppy under pressure Bellerin is erratic and unaware some of the time despite his great attacking input and speed which helps us recover in… Read more »

Anyone ever seen Iwobi actually tackle someone to win a ball. What frustrates me is he appears to have all the tools – he marks space but not the man and never attempts to win the ball. The difference couldn’t be starker with Lacazette or players like Mane.

Huh? Iwobi is one of the better players at pressing in the side, his work rate is very good

I like his improved work rate and overall contribution in the last two games. He can build up from those positives by improving also on his final pass on the opponent’s penalty areas and finishing off a goal move. He’s been good with assists lately.

I don’t know if he looked better on screen than in the ground. Most of the people around me thought his passing was absolutely rubbish. He did get an assist which is an improvement and he runs around but he is not Arsenal class, or nor the sort of class we believe is what we are.

And who the hell do we think we are? I’m absolutely sick of the way we slate our players and then we wonder why they aren’t consistent!

Well on screen his passing created the first goal, back heel that should’ve lead to a xhaka 2nd an auba near post miss and a realitively simple auba header wide. Also on screen it gave the illusion of a guy working his arse off

What is Arsenal class? Ramsey?

Our fans these days easily forget that Iwobi is just 22. His best years are still yet to come.
And they expect him to be playing this season as a player on a 180k+ per week salary. Come one guys, give him a break.
He’s improved so much this season, and it’s so wonderful to see him getting better.
Don’t expect him to be improving exponentially game after game. Cut him some slack.

I’m really hoping we can at least stregnthen our defense this transfer window. And then let’s see how we move forward.

Great attitude from him and the other players. Maybe if more fans supported him and the others it would help. Lose, draw or win some people still trot out the same old negative rubbish about him.

I think its down to racism. If he opted to play for England he probably wont be so often bashed, even when he’s a stand-out performer in the team like at Liverpool and against Fulham.

Sort of like Bellerin. There’s a tinge of the “foreignitis” about the constant picking on Bellerin also.

In fact the only other player in recent times that got similar stick at the same age was Ox, who was almost forgotten, was 23 when he left us.

And guys are happy at the great deal we got from Liverpool, bust considering how successful their recruitment has been in recent years, they’ve clearly seen something in Ox.

And now the fans want to drive off Iwobi in the same fashion.

Iwobi seems like a confidence player to me,which hopefully means the last couple matches bode well for the next few. (If we keep in mind he was a relative bright spot for us in ‘that match’).

Let’s hope the team give him the runners to pick out and movement off the ball to combine with going forward!

Why is Iwobi always the scapegoat? Mkhi will play badly – no wimp. Ramsey, Kola, Mustaphi, Sokratis etc will put in a bad shift but the only guy who makes effort to run at opponents get slated over and over. Many fickle fans.

As I mentioned last game against Liverpool, not sure what some people are smoking. They will find every piddly little thing to put down Iwobi much like Mustafi, Granit, Ozil. They won’t mention Torreira was fleeced again today which led to the goal against us. Or Sokratis gave away two free kicks in dangerous positions needlessly let alone rushed in around the half way line there by exposing us to Sessegnon against the aging Koscielny. Thought Iwobi had a very effective game. his passing got poor toward middle of second half (likely fatigue) but in the first half he made… Read more »

Our best player against Liverpool (though that wasn’t saying much) and probably MOTM today. You can see why Emery likes him. In superb shape physically, one of the few players we have that can make something from nothing, consistently takes on his man, and is also an effective presser. If he can gain more consistency with his final ball and in front of goal, he’ll be top class.

I like the way iwobi runs at defenders. That shd be the way instead of 100 % passing.If we can another 2 gunners playing this way defences wont have time to react.
One more thing. The inability to keep a clean sheet is troubling.Steps must be taken to improve this aspect of the gunners tactics.

Arsenal’s best player against Liverpool and among the best players against Fulham. In last two matches I’ve seen lot of improvement from him. Now he is better than ozil I think in most of the departments (Dribbling, Tracking back, defending, Key passing, Pressing).
Ozil should leave Arsenal if he doesn’t play regularly. Now Ozil is becoming problem for Arsenal as Alexis Sanchez was problem for Arsenal in his final days.
Arsenal has Defensive problem on the pitch and has Management problem off the pitch, both the problems need to be sorted out as soon as possible.

Our best player over the last 2 games, yet reading the comments you’d think he was our worst.
F365 had an article over the perplexity of Arsenal fans digging into our 22 year old academy graduate who, for reasons nobody outside of Arsenal seemingly understands, gets a lot of abuse, considering that outside of Auba and possibly Lacca, he’s been our best attacker of the whole season.

I have always liked Iwobi and he has been better this season. I do have reservations about his work ethic tho, as I watched a small piece on the Nigeria team during the world cup and the result of a fitness test showed him to be last, so I think he has been a bit lazy. Looks a bin different this season but he really needs to kick on from here and improve his decision-making. love his ability and willigness to dribble. The win against Fulham was good and necessary, but should not paper over our deficencies and inability to… Read more »