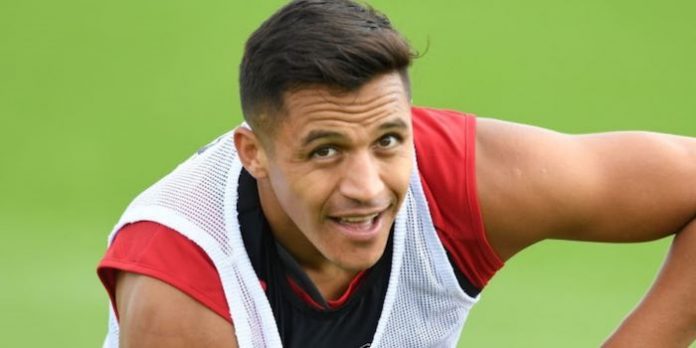 Unai Emery has revealed that Alexis Sanchez was a target for Paris Saint Germain last season and warned his Arsenal players that the 30-year-old remains a threat even if he’s not been on top form this season.

Disaffected at the Emirates, the Chile international quit the Emirates for Old Trafford just over a year ago – a deal that saw Henrikh Mkhitaryan move south – but has struggled to make much of an impact.

While injuries have hampered the piano playing, dog-lover – he’s only scored four goals for United – Emery maintains that the once coveted attacker continues to have his respect.

Speaking ahead of Friday’s FA Cup fourth round clash, the Spaniard said, “He is a very good player and, when I was at PSG, we thought he could help us,” the Spaniard told his pre-game press conference.

“I respect him,” Emery added. “In my preparations, every player is (prepared in) playing against the best players from Manchester United and one is Alexis Sanchez.

“I don’t know why his performances or quality is better or worse in these circumstances. Now, in the last matches, they are playing very, very well with very big performances.

“He’s been starting on the bench after an injury, but, if he plays Friday, we need to work to stop him because he is a very good player.”

It’ll likely be an ‘interesting’ evening for Alexis. On the one hand, he was a definite fan favourite during his three years as a Gunner and there will be portions of the crowd tempted to give him a clap should he make an appearance.

On the other, there’s absolutely no doubt he’ll be booed to shit. And why not, it’s this kind of nonsense that some of us live for.

Monreal: Three points would be perfect

I personally wouldn’t boo him but does he deserve a clap? I would say no. Miki was not a great swap but I understand why at the time they went for him

I think Mkhitaryan was a great swap. Inconsistent up front but still offers a lot

Booo booooooo boooooo.
Boooooooooo.
Booo ya dogs.
Until he retires from the scummers.
Then after that polite applause.

Just hope he perform the way he does in united shirt, not ours.

I think his reported tantrums and those all too usual smiles when we were losing left a bitter taste. Loved him when he showed the fire. Even without bias one has to think moving to united was a bad call by him and his agent with regards football – not in terms of money!

loved him as a player and i really think its intriguing what if alexis was playing under emery. Really think we would’ve benefitted if emery would’ve have come a year or two earlier. There would’ve been a chance that he would not have left, same for oxlade chamberlein. But the biggest benefit would’ve been than its only during last year that we lost all of our control of our squad, paying ozil huge contract, letting ramsey to his final year without signing a contractand not to mention the two players leaving. Unlike now emery would’ve had more room to maneuver… Read more »

Ah, Özil… ya know that once he was a football player for Arsenal and not a eager salary eater?

I liked him as a player but found that he was too selfish many times. Also, by most reports a distraction/bad attitude in the dressing room. I can’t believe the money Utd are paying for him!

He’s a pace player and his pace is starting to go. I think we shipped him off at the right time, would have rather got 30 million for him though….

Dont forget he had a big part in 2 of our FA cup wins and so so many crucial goals for us.
Boo the fuck out of him during the match but clap him off?

I suppose you could boo and clap at the same time

Have you ever tried humming and whistling at the same time? Once you get the hang of it, it makes a funky noise 🙂

When Alexis first came to Arsenal he was a soldier for us and for that he’ll always have my respect.

Bygones, boo the crap outta him

A bit of an oddball around the club apparently but to me he gave us three great years, giving everything for the cause until his final year – or half a year.
Booing an ex player is usually counter productive and in his case I think it’ll only motivate him to try harder.
Personally I’ll just ignore him and focus instead on supporting Arsenal towards successive wins.

Personally I like the classy golf clap when the ex-player is introduced, followed by incessant booing at their every touch of the ball for the entire match.

If someone low key like AMN could do a rainbow flick over him which makes him slide down the tunnel that would make my fucking day.

We all know Alexis, even off form, can be handful, because he has that game changing moment of magic in him, so lets all hope today is not one those days he is a big player for united…Love him or hate him, he has indeed played himself into Arsenal history books with his heroics while playing for us so for that i will boo the hell out of him when playing but clap him off.. unless he goes and celebrates or something, in which case all gloves are off

Ya gooner
Reply to  Granit(e) Hard!

Clap him on, boo him off. Damage him psychologically…. Muahahaha

I’d boo the crap outta him if I were privileged to be at the emirates….. I boo my tv screen with everyone of his touch instead. I can’t forgive nor forget the amusement on his face when we were crap with him on the bench!

That’s the way. We’re very disappointed in you

I wonder who we would have got in exchange if Alexis to PSG had happened!

However, so far it’s been good Alexis went to Utd, as I’m sure it’s tied up significant funds that they otherwise would have spent.

Surprising amount of sympathy going on here. If he’d gone to City to win the league and play in an exceptional side then I almost certainly would have given him a round of applause for what he’d done for us and wouldn’t have begrudged him the move. As it is, he went to an average Utd side (who are direct rivals) for the cash and had the nerve to release one of the most patronising ‘thank you’ messages, comparing himself and his move to Henry and his transfer to Barcelona. He’s probably a much nicer person than Nasri or Ashely… Read more »

His last year of losing the ball 9384723947 times per match or throwing tantrums was enough for me to stop bothering about him. He did more harm than good at that time. Before that, it was actually nice.

Advice please? I can’t get to the game so my question is should I boo the tv? ?

De Gea not playing (being rested) … that’s worth 2 goals to us so 4-0 to the Arse.
Alexis to miss late penalty when he’s smacked down by the Beast and Sokratis. Little shit is a spoiled brat but was brilliant for us most of the time.

I certainly haven’t forgotten how much he gave the ball away in his last season.

I have no time for the bloke and I’m glad he went. I’m also glad we replaced him with a player who actually wants to be here.

Unfortunately United have learnt that possession isn’t everything

Perhaps a moment of silence instead to commemorate the passing of his career since he left.

We need to be wary of him tonight.

I just hope the players that played with him at Arsenal haven’t forgotten his killer move of cutting in from the left, twisting and turning for about a minute and then chipping a straight ball into the box for nobody in particular.

If not, he could cause us problems.

We made a strategic blunder (Mslintat) selling him to UNited. Not that he helped them in any way but he was keen on City. Instead we turned their offer down for a slightly higher one at United but negative implications to our strategic need. Rather than fulfill a need for a Rwinger to balance the team out (even back then with Alexis, we needed a threat from the right), we ignored a wantaway Mahrez who was keen on a move to London as his preferred destination. We then left United as the only bidder for Alexis and lay ourselves prey… Read more »

Boo the shit out of that petulant ball hogger. Adds to the fun espexially if we beat them

Looking forward to the possibility of kos having a little go at him as well.