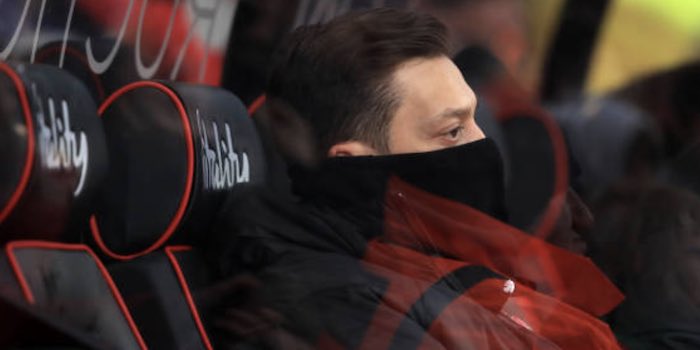 The Arsenal medical team have confirmed that the fitness of Mesut Ozil, Shkodran Mustafi, Nacho Monreal and Hector Bellerin is still being assessed ahead of this weekend’s FA Cup third round clash with Blackpool.

While, all four players are on the mend – Bellerin and Monreal were pictured in training ahead of last weekend’s match with Fulham – it seems unlikely they’ll be risked at Bloomfield Road. Given we have important games against West Ham and Chelsea on the horizon, that would make sense.

To recap, Ozil has a knee problem, Mustafi and Monreal have hamstring issues and Bellerin is nursing a calf injury.

As for how the squad will look on Saturday evening, we’re guessing that Unai Emery will change his goalkeeper and that the likes of Mohamed Elneny, Carl Jenkinson, Eddie Nketiah and Bukayo Saka are in with a shout of game time. Zech Medley could make the bench given his involvement in recent Europa League squads.

Emile Smith Rowe, who’d usually be pushing for a starting place in this type of game, remains sidelined by a hip problem. Dinos Mavropanos’ wait for a first game of the season goes on, as he works his way back from a groin problem.

Update – During this afternoon’s pre-match press conference, Emery revealed that both Mavropanos and Smith Rowe have returned to training. However, Mustafi, Bellerin and Monreal did not take part.

“This morning Dinos Mavropanos started to train after I think five months,” he confirmed.

“That’s good news. Emile Smith Rowe trained with us this morning. Continuing with his injury and not OK to train with us is Mustafi, he has to recover from his small injury and continue working alone.

“Bellerin and Nacho Monreal, Mkhitaryan and also Mesut didn’t train this morning. Tomorrow is the last day, we are going to wait for tomorrow, for how we can be for Saturday.”

Arteta: Ozil’s wages don’t impact my thinking at all

Arteta: If the players are willing, they are welcome

I’d be all for playing most of our kids/2nd/3rd string players in this game. We should be able to get by anyway. I wouldn’t even risk AMN, West Ham will have some speed on the flanks…

Except Felipe Anderson? One of the signings of the season and an absolute beast?

Also, considering Hector is almost back, I’d play AMN as much as possible. He’s just entered some of his best form for the club and looks comfortable. Leave him in the lineup I think.

One thing i find fascinating is how people abused Wenger for picking AMN for the wing back position instead of central midfield. But you dont hear anything when Unai does it? Isnt that weird?

Its called double standards. Same with Torreira losing the ball 3 or 4 times leading to goals in recent 3 matches but you don’t hear complains like you do if it were Granit. Same with Mustafi, he hasn’t played much of 3 last matches Soton, BHA, Liverpool all of which we lost but apparently he is the one to blame. Same with critisim on Ozil, Iwobi when Iwobi has come up with two assist in recent games. Same with this whole fairy tale image that we are different squad when our point tally is about the same last season. Same… Read more »

i still find it a bit irritating that AMN is used as wingback. but the situation right now is that we dont have a choice in it. Its either him or lichsteiner and i dont want him anywhere near that position. but still in the long run i still think emery would give more chances for AMN in midfield like how AMN played in midfield against liverpool. It shows that emmery trusts him completely in midfield, but since we dont have any option now he has to wait.

I always said he should play at Rback.

We did not need Lichsteiner. We could have kept Calum for the right side of back3.

AMN needs a regular position now to develop. He was decent at LBack so why not his natural side?

Against Liverpool deployed as a winger he was too high up and did not give Lichsteiner sufficient cover. But as a fullback he has tremendous recovery pace even when he makes mistakes and he will.

We need the big guns ready though, we’ve underestimated clubs like Blackpool before, they’re going to give everything they’ve got.

Niles hasn’t played much football this season, he’s had plenty of time to recover from his injury, he’s got 4 days recovery from Fulham and we’ve got a full week preparation for West Ham, surely he can put in 90mins in the fa cup this weekend?

I hate this new update for injuries on arsenal.com, they don’t reveal anything just repeat assesed and nothing else.

It’s always been like that Bob; just like transfers. Even when all the big media outlets have confirmed a transfer, Arsenal always keep tight lipped and so .com finally confirms it, it is no longer a surprise.

Was being quite sarcastic haha

Agreed.
I imagine there’s an Arsenal WhatsApp group, and Stan personally messaged Unai to tell him not to reveal much, as part of his mastery plan to shroud the club in a mist of secrecy.

Ignore, just seen you were joking. 😀

Why give our opponents an advantage?

I actually love this competitive edge that Emery and his team has brought. We are more secretive about the injuries, and also I love how sometimes the lineup is written like Leno, Maitland-Niles, Lichtsteiner, Sokratis,Koscielny, Kolasinac as if we’re playing 3 CBs, and then in the game Maitland-Niles is a winger, and it’s actually a 4-3-3. I think it’s smart stuff. Also one thing I noted during Christmas, what Wenger never did, and I think is great management and optimization from Emery, is that by leaving out Özil and Elneny for a long time, and creating a situation where they… Read more »

I critisized 3 weeks ago and everyone would get on my back…
Something like “in individual/team training” would be better as to know if they have a chance to be involved for the next game. Or just update it after Emery has given news on the press conference. Easy.

A Different George
Reply to  daremkd

I think it’s much more informative than in the past. You get a very good sense of who is close to returning and who is further away and, generally, how long. “Assessed ahead of . . . ” means it’s possible the player can play in that match, but not certain. They tell you when someone is expected to return to full training, then that they have, in fact, returned. Look back at all the reports about Koscielny.

I think we need to be lazer focused on league and Europa. Sucks a bit, but we own the FA record, and the squad is pretty thin right now.

We are the Kings of the FA Cup. Let small teams like United treat it like a training game for the kids. We should put a proper effort into it because we need the team to grow in confidence and bond as a unit under the new manager. Letting the kids lose to Blackpool does nobody any good, lest of all the kids.

It’s Unai Emery’s first FA Cup game. We should field a mix of both experienced & academy players to ensure we progress to the next round. Remember Aston Villa?

I don’t remember that, no.

My bad. We played Forest, not Villa.

It’s a shame ESR is out injured, he was beginning to make the step-up.

With the tight budget being made available, I would think the mandate to Emery will be to develop ESR into the long term Ramsey replacement. Similarly Eddie and Saka (+Nelson) as Welbeck and wingers respectively.

Not only for this window, I don’t have much hope of a transfer war chest for Emery under the Kroenkes, the academy and a shrewd buys in the market may probably be the way forward.

As I have been saying for a while, there is NOT much difference from when Dick Law and Wenger were in charge to with Mslintat. These are imaginary differences some Arsenal fans will themselves into believing. I think Emery was shrewd enough not to rock the boat and go against Mslintat when he first came in (Arteta would have mucked it up/antagonised thingsbeing less experienced) We’ve seen poor band aid buys ala Mhkitaryan and Lichsteiner. We see inexplicable loans of Nelson and Chambers. the strategic thinking to these decisions have been muddled at best. Hopefully with Unai now more established… Read more »

Is it just me or are there others here who can’t wait for little Ole Gun and his merry men to meet a half decent team?

That man is the luckiest person I have ever seen. He was as a player and now the same as a coach

Perfect set-up for ManU. Run off Psycho and replace him with a former player while they have a string of home games against bottom to mid league opponents. Feel this was planned way ahead of the manager’s removal.

Only 1 home game so far

I’d be very careful with Manure.

They are only 3 points behind.

Ole football has them resurgent.

Off topic, but we are still the ONLY Invincible club in the Premier League. Jog on scousers! hahaha

That’s exactly what I was going to post. Well done Pep & city for that. Don’t mind Pool winning the Prem, they have done brill in the transfer market.

Some insane people want to sell Ozil, Mustafi, Iwobi…before that try selling Elneny, Jenkinson, Lichsteiner We are so thin at the back. Mustafi was taken off as I mention for precautionary reasons mostly not bc of some imaginary poor performance as some would will themselves into believing. When we went 4 at the back without him, we leaked a goal courtesy of Torreira (again) losing the ball in midfield for the third time in a row. Imagine if this was Granit. The double standards NEVER ceases to amaze me. Ozil is obviously trying to move in January particularly if you… Read more »

Mustafi was taken off because he was injured.

If we sell four players as you suggest, and no suitable replacements are available in this window (it is January after all), how will we be stronger?

We dropped 7 needless points (maybe even 9) against Soton, BHA and Liverpool (United too) We should have won at least 3 of those matches. Coincidentally worth reminding some that Mustafi did not feature against BHA and Liverpool. Pity we could not have enough belief to beat Liverpuddle. Instead we had to rely on City to end their unbeaten run. Had we pocketed 7 points (or at least an added 4) we would be up there in the mix next to the great pretenders or at least still within striking distance of league leaders. That said, defensive issues is the… Read more »

FA cup versus Blackpool, won’t want to throw it away but we have to worry about fitness in the backline and in attack as well (not to mention Torreira has been off form likely partially fatigue) This isn’t the Carabao cup. I’d say Emery has a conundrum on his hands. He should play a reasonably strong team to get the business done but he has got to protect players. Squad is thin (Disregarding Jenkinson and Academy) : FW – Auba, Laca, Iwobi, (Ozil), Mid – Torreira, Granit, Guendouzi, Elneny DF – Kolasinac, Sokratis, Koscielny, AMN, Lichsteiner (Mustafi), (Bellerin), (Monreal) That’s… Read more »

One of the greatest signings in the Dick Law era Santi Carzola 2 goals to the good today.

Miss the little chap. Converted from the wing to central midfield by Wenger, ambidexterous, superb range of passing, dribbling wizardry.

No one says shit about Ozil? Yikes, I shudder to think what saying enough looks like. More shit than any farmer could ever make use of available out there.