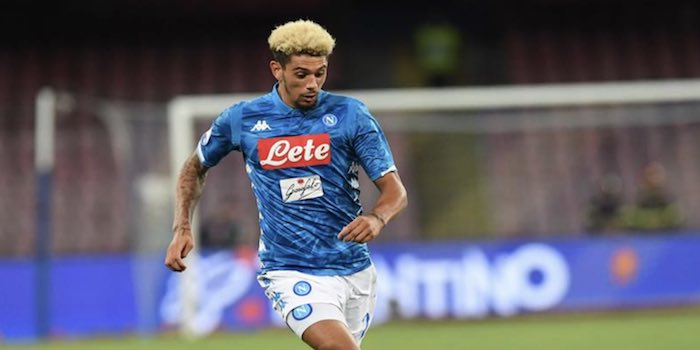 Via GGFN comes a report from France Football which says Arsenal have made an approach to Napoli over right full back Kevin Malcuit.

The 27 year old joined the Serie A side from Lille last summer, but has struggled to make his mark in Italy, playing in just 12 of their 21 league games and not a single minute of Napoli’s Champions League campaign.

Arsenal are coming to terms with the news that Hector Bellerin is out until October with a cruciate knee ligament injury, but in terms of numbers we do have players who can fill the gap.

Ainsley Maitland-Niles started against Man Utd in the FA Cup on Friday, while Stephan Lichtsteiner and Carl Jenkinson – who was told he would not be allowed leave on loan this month – are also options for Unai Emery.

In fact, the Spaniard today seemed to play down the idea of signing a defender during the transfer window as we focus on attacking midfielders, saying, “We have enough players who can play centre back in the squad.

“The problem is we’re having a lot of injuries in this position. We have enough players.

“If we can bring another player, and all the other players we have are well to play, then we could maybe have a problem in the future.”

So, it doesn’t sound like a defensive signing is imminent, with continuing links to Denis Suarez and an expensive loan deal for Inter Milan’s Ivan Perisic.

The window closes at 11pm on Friday, but before then the Gunners have to take three valuable points when they face Cardiff on Tuesday.

As for the Kevin Malcuit story, we’re going high on the Poo-O-Meter for this one.

Anyone who thinks we can qualify for the Champions League this season through either the league table or winning the Europa League, is extremely NAIVE!
The form of our defense, coupled with injuries, there is NO WAY

I am 99.99% certain. If I am proven wrong, feel free to bash me repeatedly

Top 4 seems unlikely, but I wouldn’t rule out a EL title.
Easy draws until the final stages, then maybe we can put 1 or 2 great performances to win. This season we saw it’s not beyond this team to rise in occasions and deliver.
Hopefully it’s still possible.

Why is top 4 unlikely? Only 3 points behind Chelsea

Sadly, I don’t believe the issue is Chelsea, but United.

Why? So that we can go back to getting trashed by Bayern and Barcelona?

I don’t think anyone is hopeful that we’ll go there and have a great run. we’ll probably still get mauled by the usual top dogs. But it’s about stopping the regression of the club, get money to invest, make better commercials …etc.

the manc squad who won the EL two years ago wasn’t that good either. Nor the the semi-finalists last year. im fully aware this year we might face stronger opponents but i personally refuse to give up on the whole season already. Also i don’t think its extremely naive to think we can finish fourth. united on a run but they havwe to face pool again and if we win the fixture against em….chelski seems to struggle too. Is it unlikely that we finish the season in a way everyone is satisfied?! Yes. But nobody expected anything at the start… Read more »

I expect a poometer for eating a malcuit.

Emery’s point, that when everyone is fit again there would be a glut at the position, makes no sense as an argument against taking a player on loan, especially at right back, where we know our first choice player will not be back this season.

Red-Sky
Reply to  A Different George

I agree, we basicly have one decent right back and he’s injured for 9 months. Licht is gone by summer, and AMN is not good enough for rb. So we indeed lack numbers and quality there and his comments make no sense.

The quote above is specifically about CB though.

Archer
Reply to  A Different George

The main problem is wages. The squad is unbalanced enough as it is and adding another average player is nonsensical.

Is there a way you could implement the poo meter into the title so that I may contain my excitement.

dont think we are gonna get him. For many reasons Hysaj their preferred right back has been relegated to bench and malcuit has been the starter for some games now including some high profile ones. They are not gonna sell malcuit to arsenal unless they have resolved issues with Hysaj or if they have bought a better right back than malcuit which they havent.

Why he will come to play for a average manager when already play with a top club with superb manager?

Hooray – we’ve been linked with a defender!! Made my day. No idea who he is or if he’s any good but what the heck – he’s a defender!!

“The 27 year old joined the Serie A side from Lille last summer, but has struggled to make his mark in Italy, playing in just 12 of their 21 league games and not a single minute of Napoli’s Champions League campaign”

Oh, great. He should be cheap, then.

Ya gooner
Reply to  Fatgooner

Tbh it should be in line with expectations of a january loan signing. playing 12 games this season is a non if you ask me at least he will be match fit.

I’ve see this dude play against Milan Saturday, he looked good. Thats’ just one game though, hard to judge him on that.

”The 27 year old joined the Serie A side from Lille last summer, but has struggled to make his mark in Italy, playing in just 12 of their 21 league games and not a single minute of Napoli’s Champions League campaign.”

Perfect fit for Arsenal then.

Christopher Samba was omitted from Aston Villa’s training session purportedly to allow him sort out his future . Make of that as you will, but still……

LOL @ you even thinking that we may be looking at Chris Samba as a potential loan deal. LOL.

Is he any relation to Cherno Samba, who I signed from Millwall as a 16 year old when I was Arsenal manager in Championship Manager 2002 and he helped me to win the Champions League about 10 times.

Is he still tall?

At least the poo is back.

HIGHLY unlikely. AMN has been filling in fairly well for Bellerin. All those who say its not his natural position, what is his natural position? He may not be the right fit for us in midfield. He has deputised before at Lback when Kolasinac was out and right side is his natural side. Its simply absurd. AMN needs to be given a run and make this his permanent position as competition to Bellerin. He has the raw power to do it but also decent ball control skills. What he needs to do is not be too slack about things. I… Read more »

He shh’d Salah one game i remember that, AMN will do if we can’t find a good RB in the window. tick tock lol

There was a time when we desperately hoped for players in their prime. Oddly I’m more optimistic when it’s younger players in their early 20s (not D Suarez), than what seems experienced but misfits. There was a time when could work his magic and turn such players into integral components of a good team. With Emery struggling to fit players like Ramsey (even before the contract was withdrawn), Ozil, even Laca and Auba in a single winning team due to various reasons, I’m only hoping Emery can somehow get us into the CL for next season, then hopefully improve the… Read more »

at least the rumors are a position of need, since while I think AMN can play RB, I think Emery likes him more on the wing in 3 back setup.

But this one seems about right on 8 poos considering he’s just established himself in the Napoli side and he’d also be Europa tied (Auba-style) as Napoli dropped into Europa out of CL. Not saying we’re not after him, but it would be more of statement about league ambition whereas I think most folks would agree Europa is our likelier path back to CL this year.

What quality of player will arsenal attract if they fail to qualify for Europe football?