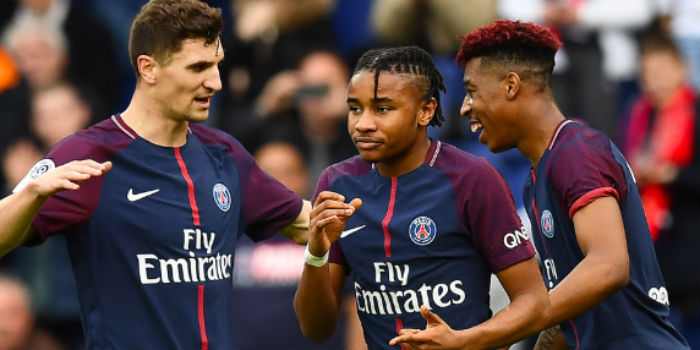 According to L’Equipe, Arsenal are in talks to sign Paris Saint Germain’s attacking midfielder Christopher Nkunku on loan with an option to buy at the end of the season.

The midfielder, 21, scored five goals in 27 appearances under Unai Emery last season and has been in and around the first team at the Parc des Princes since making his debut in December 2015.

It’s suggested he might be frustrated at a lack of game time this campaign, having played just 195 minutes in Ligue 1 since September.

Emery has made it clear he’d like to add someone who can provide width to his squad and links with Yannick Carrasco and Denis Suarez have already surfaced this month.

Talks with the latter appeared to be progressing nicely but Barcelona’s insistence on including a purchase-option have seemingly frightened us off.

Is Nkunku the alternative? It’s hard to tell at this moment. He is capable of playing wide, even in a wing-back slot, as well as centrally; so that’s a couple of boxes ticked. What’s more, he already has a relationship with the boss.

We’ll keep you posted if we hear more…

But how many poos??

Poo-rating? Sounds like a 5 (not a household name, loan and experience with manager) not least of all because of the current team’s ability to close any deal.

27 appearances is a lot for a team that splashes out on international stars. Or maybe that’s just the bonus of being in a team that won two domestic cups?

This guy is a very talented – if raw – youngster. Great set-piece taker too. Would be more exciting than Suarez even we might question his ability to make an immediate impact. Still, it’d be a great purchase if we can get him!

I remember him being pretty good against us when we trounced PSG in a pre-season friendly this summer. Could be a pretty smart signing.

at the kallang stadium? rabiot walked and ran circles all over us man

Thanks for the info good man .. You may have made everything up or used FM .. But as long as I’m concerned your ITK .

We need a more experienced player at this stage to make impact.

Someone who can also provide width on the right.

We do not have the money to buy in experience for an immediate fix!
This guy seems highly rated by those in the know, will not cost a fortune, can be moulded into the Emery system, whatever that is, and will be a surprise package to all of the other PL teams.
We need to be pragmatic this season and use it to rejig the squad for a proper assault on all fronts 2019/2020.

Things have got better since Mslintat has been in charge apparently.

Give it a rest mate.

I need to learn to mute him.

Kwame Ampadu Down
Reply to  Red-Sky

Good work on reducing the length of the post Santori. Next up : making some sense.

We should play Santori bingo. Points for any mention of ‘Mislintat being shit’, Mahrez, Torreira’s ‘poor form’, Mikhitaryan not being good enough, ex Dortmund players having no resale value, absolutely anything along the lines of ‘I said this last year’ or in that fucking annoying ‘I know better than you lot’ tone. But for the automatic win, any bullshit essay over 300 fucking words spouting absolute crap like it’s gospel will result in immediate bingo.

Count me in. The good thing is somebody always wins.

When Santori posts, we all lose.

Got to add how Mustafi is not as bad as people make out and or if Xhaka has made the same mistake as Torreira people would slate him.

I call dibs on “Elneny is useless”.

Double points if the phrase is ‘flog dead horse elneny’

hahaha Comment of the day! I thought its just me pissed off by the lengthy rumbles about absolutely fuck all. I’m in!

Then I call dibs on every time he spells Sven Mislintat’s name “Mslintat”.
Just add the “i” in there, it’s not that hard!

They’re all good, but I have a hankering for the old hits, like:

Don’t forget Jenkinson, have to a have a shot on that one.

This excites me way more than .. other rumored targets for our wings . Because he is young french and unlike other targets I haven’t seen him beeing shit.

We need a more experienced and capable player at this stage.

All these young hopefuls, may as well put on Willock.

Wide right is a massive issue with Hector gone for the season.

I don’t understand our transfer team. Why worry about FFP? They saddled us with the tight wage situation in the first place with Ozil and then added Lichsteiner for 90K to do what AMN could have done better. If Ramsey is to leave this window, that would be 110K per week freed up. Elneny is another 55K. That’s 165K. That should be enough to bring in 1 or 2 quality players WITH EXPERIENCE you’d think. Sell Mhkitaryan if need be to free up another 120K . That’s 275K never mind Jenkinson (if you can even find a buyer for him)… Read more »

Better the Devil You Know
Reply to  Santori

Your numbers are way off mate

For the eleventy thirtieth time, Ramsey isn’t leaving in this window.

Why in the world would we let a known quantity who is still dedicated to the cause and working pretty well in Emery’s system go while we’re chasing a top 4 spot? To take a gamble on a player that may take time to adapt to the league and the team?

That wouldn’t make any sense.

Surely it would make much more sense to loan until the end of the season and buy then.

The mistake you are making is you are applying common sense.
Others (no names required) appear to believe that it is a simple matter to sell players you don’t like to raise cash to buy non-existent messiahs for peanuts to resolve all of our defensive and creativity issues.

Emery knows him, looks like he’s been around the French youth teams for a long time, so he must be pretty useful.
Surely worth a punt?
Elneny replacement?

Happy to put faith in Emery but hope he’s a loan not a buy. A buy wouldn’t send a good message to the likes of Reiss Nelson and Smith Rowe. At the end of the day this guy gets most of his minutes as a sub in a weak league.

Funny you should bring up Gwen Doozie. I spied him in a number of the clips from Nkunku’s highlights reels. And since I’m now an YouTube certified expert on Nkunku, I can say that he’s decent technically, picks a pass out fairly well, and doesn’t mind getting tangled up in a tackle while staying on his feet mostly. But tends to hold onto the ball and take on too many players sometimes, and decision making on hold / final ball can use some work. Most of his play was on the right side. Liked to find space out there. So… Read more »

Hey, ‘member when we almost bought Luis Suarez? Now we can’t even get Denis.

All I can say is that this administration is much more thoughtful and more often right about signings it makes, and so I am optimistic about our chances of signing a positive addition to whatever position we are looking at.

Can he contribute with big performance?

With his characteristics, he can help the team on the pitch.

I no longer see the need for signing an attacking player this month if we’re going to continue with the 4-3-3 / Diamond formation. Against Chelsea we had Ozil and Iwobi on the bench, with Mkytarian and Smith-Rowe due back from injury soon.

I think Emery sees him on the right.

Reading the BTL/comments over at L’Equipe, PSG fans are not liking it, and seems this would be a great score, apparently the kid has bags of talent.

Please what exactly is this purchase option that scared us off Suarez?

Isn’t it just as the name implies, an option? Why should we be concerned if we have option of buying or not at the end of the season. Clarification pls.

Option or not, I’m glad we let go of that deal. We should do better than him.

The point is it is not an option, it is a mandatory purchase clause

How is it then a loan? To me, that’s a purchase with a deferred payment.

That depends on if FFP officials are in the room or not.

He is not better than Smith Rowe.

Players like ESR are the future. These bloody injuries are crippling us particularly with young guns like this who are just starting to make the headlines. Let’s hope he returns soon and has not lost his hunger or ability!

Fantastic if true, Nkunku has a lot of potential and a great engine.

This website uses cookies to improve your experience while you navigate through the website. Out of these, the cookies that are categorized as necessary are stored on your browser as they are essential for the working of basic functionalities of the website. We also use third-party cookies that help us analyze and understand how you use this website. These cookies will be stored in your browser only with your consent. You also have the option to opt-out of these cookies. But opting out of some of these cookies may affect your browsing experience.
Necessary Always Enabled
Necessary cookies are absolutely essential for the website to function properly. These cookies ensure basic functionalities and security features of the website, anonymously.
Functional
Functional cookies help to perform certain functionalities like sharing the content of the website on social media platforms, collect feedbacks, and other third-party features.
Performance
Performance cookies are used to understand and analyze the key performance indexes of the website which helps in delivering a better user experience for the visitors.
Analytics
Analytical cookies are used to understand how visitors interact with the website. These cookies help provide information on metrics the number of visitors, bounce rate, traffic source, etc.
Advertisement
Advertisement cookies are used to provide visitors with relevant ads and marketing campaigns. These cookies track visitors across websites and collect information to provide customized ads.
Others
Other uncategorized cookies are those that are being analyzed and have not been classified into a category as yet.
SAVE & ACCEPT
wpDiscuz
59
0
Would love your thoughts, please comment.x
()
x
| Reply