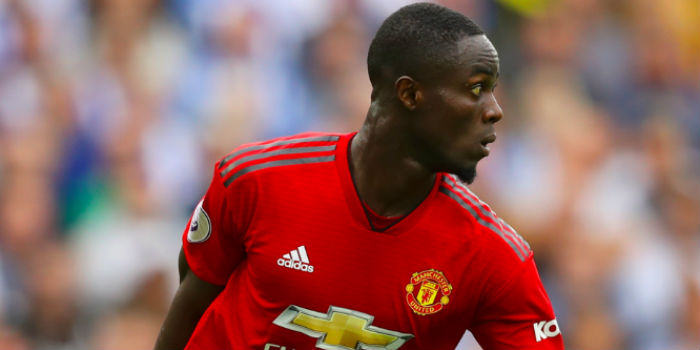 According to the Daily Mail [no link, you know why], Manchester United have rejected an approach from Arsenal to take Eric Bailly on loan for the rest of the season.

The Ivory Coast international played the first two games of the season for Jose Mourinho but quickly fell out of favour and has made only seven further appearances.

The 24-year-old was signed for £30 million in 2016 from Villarreal and only has 18 months left on his contract. Apparently, they do have the right to extend his deal by two more years but they are waiting on a new permanent manager to make that decision.

While Bailly isn’t as underwhelming as our recruitment of Mikael Silvestre from United (sorry to bring that up), it’s hard to be excited about a link with a player who they seem not to rate at Old Trafford.

It’s interesting that we’re still in the market for a defender during this transfer window. After a couple of rumours tipping us to swoop for defenders in the days after Rob Holding’s injury, things died down on that front. Losing Hector Bellerin may have brought our need on this front to the fore again.

Seems a bit naive to be asking one of our main competitors to sort out our injury crisis, but what do I know?

Yes Sir, very naive. They won’t let a defender go at this point of the season so we should force a swap move with mustafi.
No but seriously i remember the season(11/12, i looked it up) where chelski finished 6th and we 3rd and they loaned us Yossi Benayoun(25 apps in all competitions, 6 goals 3 assists). Fools!

yep, as expected. and weirdly my reply there to you Kongo was typed -1 year ago!

Would have gladly finished lower that year if it meant not ever having a Zionist like Benayoun on our team.

Arsenal have helped out enough rivals in the past….

Man United really wanted Mathieu Debuchy a few years ago. He was sitting on the bench for us at a time he felt he needed to play so he would have a chance to be in the France team. And Wenger–correctly–refused to allow it.

NairobiCannon
Reply to  A Different George

Strangest decision ever. Refuse to negotiate for a player who we had no use for but come to the table with united for two of our most lethal attacking players. I will never understand the chest thumping that followed our refusal to sell Debuchy to United: “Yes! We do not sell to rivals anymore! Rooooar!”

Agreed. Same stupid fucking posturing that saw us lose 60M on Sanchez. And, lets be honest, if Debuchy wasn.t good enough for us he wasn.t like to improve United much

God is a Gooner
Reply to  Toure motors

We should just Bailly a proper defender if you ask me.

Gentleman Wenger would have helped them the other way around.

Would love to know why the down votes

Probably no recall option, and he’s been playing a lot in central midfield recently. Don’t think he’s rated enough by the hierarchy to have much of a future at the club.

Chambers started very well as a CB. I have the impression, we are not helping young players enough after they join the senior team.

Jenkinson should have covered Emery when he was capturing the flag.

I thought it was a team death match.

Hi top 4 rival, would you like to loan us one of your defenders to help us beat you in the race for a lucrative Champions League spot?

Totally bone-headed tactics. Expect more of this now Sven has gone and Raul dusts off his rolodex.

They can give us only their sleeper cell agents i.e. Gallas, Silvestre

Not Gallas, he had a winning mentality. He was scoring goals with his knees when we needed it. The only reason he came was that he had big problems with Mourinho who gave his squad number to another player without telling him.

No, he was on his knees when we needed him most. Birmingham away ring any bells?

Let’s go for Otamendi on loan!

I hope this is a joke. Him and Mustafi were separated at birth.

While I understand the logic of the loan approach, surely we have our summer targets for the CB position.

Why don’t we try to bring forward that deal by increasing the outlay by £5M or so.

I know it’s difficult but that’s how we bought Monreal?

Sometimes the transfer business has got to be decisive when the problem is quite clear as well!

Because we should not be going in for Bailly at all.

I think it’s time to get Mavroponas back out there, especially if Emery goes with a back 3 instead of 4. Sok on the right, Koz in the middle and Mav on the left. He looked really good in that position at the end of last year.

Please no more back 5. We’ve looked so poor in those matches.

I would like to see Mavraponos play in the games against Borisov next month, but I’m not sure I’d throw him into Premier League matches at the moment.

Mavropanos is largely untested and still has flaws to his game.

Not all teams will set up as generous as Chelsea affording us space. But other teams may dictate a need for a back 5 in our defense.

I think he’s got a lot of great attributes(very comfortable on the ball from what I remember) but I agree, let’s ease him back in via the Europa league.

If we go with a back 4 I would like to see AMN at RFB, Sok at RCB, Koz at LCB, and if healthy, Mon at LFB. If Mon is not healthy, then I guess our best choice would be Kol at LFB, although he is stronger at a LWB with a back 3.

Why source Daily Mail if you don’t trust them? Might as well wait for a trusty site to report it first.

I don’t think Blogs is saying he necessarily distrusts everything they say, but that he will not help them get a single extra click.

I think Bailey is a very good defender,even Pogba became shit under Mou,he is young and still has room to improve.But yeah,Man United were never gonna be that stupid.

A Different George
Reply to  Nzini

I would definitely take Pogba on loan.

Why would Pogba want to come to Arsenal.

It was a joke.

Bailly has never struck me as a player who’s comfortable with the ball at his feet, particularly under pressure… he also loves an erratic sliding challenge just as much as Mustafi.

Would be a strange signing, that IMO would strengthen United’s push to finish above us.

I still think we’ll get Suarez on loan, and wouldn’t surprise me if there was some other movement as well this month, with maybe Elneny going out.

Why on earth would United loan Bailey to us?

They are chasing our coat tails at the moment and are parity with us in the league.

Daft move if this is true.

I think he’s a decent player myself, but it doesn’t matter as like many have said not a chance Manure would stenthen a direct rival.

They face us shortly with the FA cup and they are level on points.

If we have been chasing Bailey, it says it all about the management of Transfers at the moment.

Not that Chambers has convinced anyone at Fulham but perplexed by our decision to loan him. Surely we should have persuaded him to stay for the season. He looked good pre-season and he could have easily covered at RCBack instead of Lichsteiner. Plus lest some forget his natural position is at Rback where he would likely fare no worse tha over the hill Lichsteiner or one dimensional Jenkinson. The other loan that flummoxed me was Nelson. Yes great for his development but detrimental to us considering the gap in capability on that side. Hopefully he now doesn’t feel the want… Read more »

Our rival for a top 4 spot was neevr likely to allow this deal to happen. However, dont know if you dont ask.

No doubts about his quality but could be a dodged bullet though.

Not fussed about a manure reject