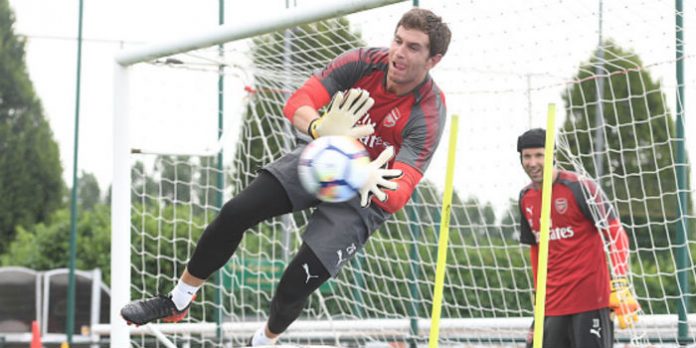 Emiliano Martinez is set to join Championship side Reading on loan for the rest of the season.

Earlier this season, rumours circulated that Martinez, who has been number three at the Emirates this season, was being looked at by French side Rennes.

Arsenal goalkeeper Emi Martinez is set to join Reading on loan, as per his agency. pic.twitter.com/BZjcjyY1lP

Martinez, who joined the Gunners in 2010, spent last season on loan with Spanish side Getafe where he made six appearances. He’s previously had spells with Oxford United, Sheffield Wednesday, Rotherham United and Wolves.

The Argentine has made one appearance for Unai Emery so far this campaign, keeping a clean sheet in the 1-0 win over Qarabag earlier this month.

It’ll be interesting to see who is handed the responsibility of backing up Petr Cech and Bernd Leno for the rest of the season.

Angry Arteta told us to show ‘animal side’

Freddie: I want to put smiles on faces again

Bet he’ll be telling all his new teammates about that game he played there back in 2012, conceding 5 but still coming out in the winning side ?

I wonder if they have an option to buy?
He’s too old to be a young prospect, especially when we have so many young goalkeepers already at the club

I was under the impression his contract expires this summer.

“The Argentine has made one appearance for Unai Emery so far this campaign, keeping a clean sheet in the 1-0 win over Qarabag earlier this month”.

Think the Newshound’s been on the whiskey again. Losing track of time…

Have to admit that I only realized that after reading your comment.

Better than not playing at Arsenal,hope he doesn’t just swap that for not playing at Reading.
Also I notice that Dean Macey has lost his place at Plymouth,and they are now shooting up
the table !

And his name is not Dean….

Worth adding that (Matt) Macey wasn’t dropped; he got injured around Christmas and hasn’t got back in the team after injury as Plymouth have suddenly picked up form.

What’s happened to the Don Vito at Reading then? Always thought Mannone was decent enough, certainly good enough to be one of their better players

Confused as to why we’ve kept him on our books. He obviously has never shown enough to be our number 2, nevermind number 1. I think when it comes to 3rd choice, you just make up the number with whoever as it’s so unlikely you ever need them. Hopefully he does alright and we can get a little bit of money for him.