THE LOWDOWN
Arsenal Women take on Casey Stoney’s Championship leaders Manchester United in the Conti Cup semi-final on Thursday evening. This is the first time the clubs have met since United reformed their women’s team last year. The Red Devils are currently 4th in the Championship (if they win their two games in hand, they will go top), having decided to begin life in the second tier, but they are a WSL team in all but name.

That said, Arsenal are still favourites for this game as they bid to successfully defend the Continental Tyres Cup- a trophy they have won more than any other English club in each of its incarnations. The winner will play either Manchester City, who won at Chelsea in their semi-final on Wednesday evening. Despite the injury situation, the Gunners really ought to qualify for the final.

It's a big one up next for #MUWomen — away to Arsenal in the #ContiCup semi-finals on Thursday! pic.twitter.com/r4qr9Payox

They still have the better squad, but Casey Stoney is demonstrating a natural aptitude for management and very few of the United squad have any business as second tier players in the long term, with the likes of Siobhan Chamberlain, Arsenal academy graduate Lauren James, Alex Greenwood and Jess Sigworth on board.

With an unforgiving FA Cup tie away at Chelsea next week, the Conti Cup represents an immediate path to silverware for Joe Montemurro’s side, even if the league is clearly the priority for the season. United will almost certainly be a WSL side next season and, in the medium term, they will look to challenge the likes of Arsenal, City and Chelsea at the top of the table. Stoney and her squad will look at bloodying Arsenal’s nose as a long term statement of intent, as well as a reasonable shot at silverware in their inaugural season.

TEAM NEWS
Arsenal are still without Jordan Nobbs, Dan Carter, Lisa Evans, Lia Wälti, Tabea Kemme and Viki Schanderbeck, all of whom have some form of knee ligament injury. Jess Samuelsson misses out with a broken foot. Vivianne Miedema was rested for the cup tie at Crawley Wasps on Sunday and will return to the squad.

Leah Williamson and Kim Little played a half each in that match in a pre-planned move unrelated to injury. Emma Mitchell and Dominique Bloodworth were also rested for the Crawley match and should return to the squad. Sari van Veenendaal has played in the cup games so far this season and that should continue against United too.

LAST TIME OUT
Having been formed in 2018, Manchester United have not played Arsenal until now. United defeated West Ham with a 2-0 home win in the quarter-final, having topped a group including Reading, Everton, Durham and Liverpool which illustrates their pedigree. The Gunners needed late goals from Danielle van de Donk and Vivianne Miedema to see off Birmingham in the quarters at Meadow Park. The Gunners managed a perfect record in their group, beating West Ham, Lewes, Charlton and Millwall.

PLAYER TO WATCH
Danielle van de Donk has returned from a thigh injury and, with the likes of Nobbs and Lisa Evans unavailable, her reintroduction into the team is very welcome. The Dutch forward has become an excellent all round player, for a player of her size she is excellent in the air and very adept at recovering the ball too, which makes her a good all round midfield player.

But her real USP is her ability to find space between the lines. She drifts all across the pitch in search of pockets of space, helping link the midfield and attack. Danielle provides excellent support to Miedema by making judicious third player runs into the area. It was her header in the previous round against Birmingham that levelled the scores at a time when Arsenal were struggling to create chances. 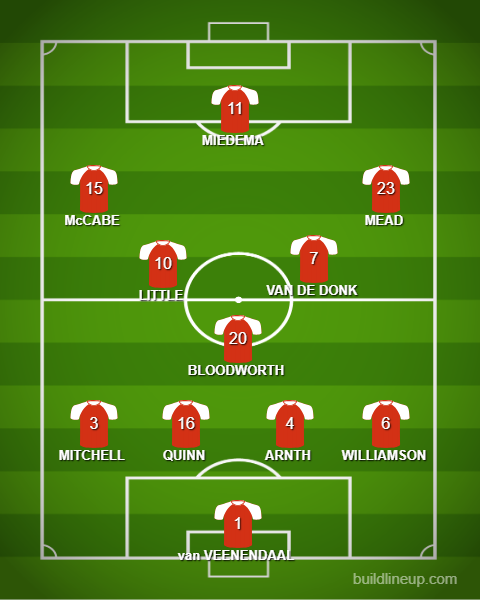 HOW TO CATCH THE GAME
The match takes place at Meadow Park and kicks off at 730pm. Tickets are available on the gate at £10 adults and £1 concessions. Alternatively, the match is being screened live on BT Sport 1 in the UK.

Our #ContiCup semi-final against @ManUtdWomen has been selected for TV coverage ?

COMING UP
We’ll have exclusive post match player reaction on the site on Thursday evening and the weekly round-up will be on the site on Monday as usual. Our February feature interview will also be posted during the middle of next week.

Let’s hope the ladies have better joy with regards to the result and injuries than the men’s team against manure!!!

I was lucky I was in Cape Town when the Netherlands came to pay South Africa, I got myself a ticket and went to watch the game in an effort to see our Dutch players. I was fortunate to see Miedema, Bloodworth and Van Veenendaal. I was looking to watch DVD and unfortunately she was still injured at the time, so I missed seeing my favourite player. What I did see though was really impressive. Miedema is a special player, her goal was so nonchalant and spoke more to her confidence in her own ability, that she just looked a… Read more »

They are in fourth place, five point behind the Spud Ladies who are top but with two games in hand and a vastly superior goal difference.

They have to play the Spuds away before the end of the season, but as the top two get promotion, it’s difficult to see past the pair of them going up.

Right you are! Duly edited.