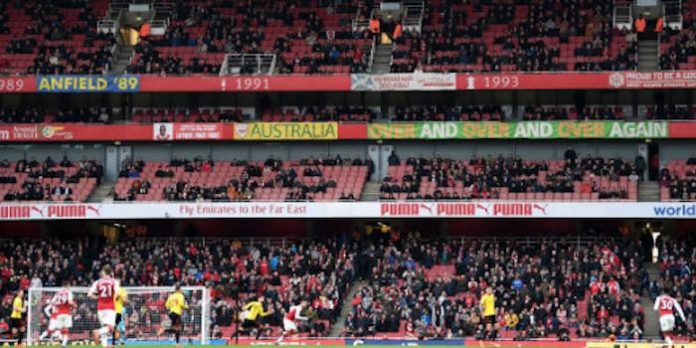 As you’re probably aware, Arsenal’s match with BATE Borisov at the Emirates will kick off at the unusual time of 5.55pm tomorrow.

Why so? It all comes down to UEFA. Not wanting a clash with Chelsea’s home Europa League match with Malmo, scheduled for 8pm, they dictated that ours should be brought forward. Why is our match moving and not Chelsea’s? For the simple reason that they’ve won the tournament and we haven’t, so, therefore, they have priority.

Originally, it was stipulated that the match would take place at 5pm on Wednesday (today) but UEFA moved it after complaints from Arsenal. When the final timing was confirmed back in December, the Gunners hierarchy were quick to acknowledge how inconvenient it would be for the home fans.

A statement read: “We appreciate this kick-off time may present difficulties for supporters and matchday staff and we would have preferred for the match to kick-off at 8pm, as has been the case for all our home matches in this season’s group stage. We thank everyone in advance for their support in relation to this kick-off time which is not in our control.”

Obviously, it’s a pain in the hole for people who are working and will likely lead to empty seats, something that the Arsenal Supporters’ Trust have raised with UEFA president Alexander Ceferin.

Eager for assurances that this won’t happen again, they’ve penned him a letter. You can read it in full below.

Knowing UEFA it’ll be filed in the bin, but you can’t fault the effort.

We are writing with regard to Arsenal’s match against Bate this coming Thursday in the Europa League which will kick off at 17.55pm on Thursday.

This is a totally unacceptable and inconvenient kick off time for a vast number of Arsenal fans who have to travel to the game after work from across London, the South East and further afield.

The result will be a huge number of empty seats and many fans having to pay for a ticket on their season tickets which they cannot use.

This is both unfair on Arsenal supporters and will lead to a poor atmosphere in the stadium.

We are sure that TV coverage will be the explanation for this kick off time but such decision-making fails to recognise that watching football on TV is enhanced as a spectacle when there is a full ground and good atmosphere.

Increasingly we are seeing TV companies dictate the kick off time and the actual match going fan becoming more and more a secondary consideration but this forthcoming UEFA league match takes things to an unprecedented new level.

Please can you respond to us and explain why UEFA believes that 17.55 is an appropriate kick-off time? What suggestions do you have for supporters who have paid for season tickets but cannot make this kick-off time?

Can you also give a reassurance that having been faced with this situation that UEFA will ensure that such scheduling does not occur again.

We look forward to hearing from you and are available to discuss with you or a relevant colleague.

I found a fly in my porridge and I wasn’t sure if I should eat it or not so I just ate around it.

We don’t care about your problems. Unless you are Barcelona or are willing to send us a fat paper envelope of euros, please don’t bother us again.

Ps the referee (Mikael Deano) will try to screw you at every opportunity on Thursday.

Might also add that priority is to make money for UEFA and not fans enjoying the game.

Down with this sort of thing…

Get your head out of the sand AST. A Ukraine time of 19.55 is absolutely perfect for a post-work pint.

Fair to say there would be empty seats and a shit atmosphere whatever time kick off is.

This is great news for us down here in Africa.. Can get the fire going after putting the lions away and be ready for bed at 8pm after enjoying a 7-0 dinner..

mmmmmmmmmm i’m having 7-0 for dinner tonight too.

Whilst we all agree with the sentiment of the AST, this is a poorly written letter.
Did a 16 year old write that?!?

nothing wrong with plain and direct language. I find people who use superfluous words for aggrandizement really disoblige me in the most consummate way.

Plenty wrong with the bad grammar and incorrect spelling in the letter though.

A Different George
Reply to  roof_attack

Wee got are Arsenal bak innit. In fairness, fairplay to AST for taking the time to write the letter but no point writing it a day before the match. The kick-off time was determined before Christmas if I remember correctly.

Agreed. The so-called AST don’t speak for me, never have.

Let’s just try and qualify for champions league next season and this won’t be a problem anymore.

Absolutely! Who cares about Europa?

It’s a trophy and a possible entry into the Champions League. As an Arsenal supporter I care about it and so should you

Is everyone just forgetting that many of the champions league group games this season kicked off at 5.55pm BST. This is clearly a problem with uefa

Personally, I dont see anything wrong with the kickoff time of 1755. Other European countries have been able to accommodate ew kickoff times! Why not England?There is nothing special with them! If Arsenal want 1945 or 2000 hrs kick off ,let them qualify for CL! Europa matches can even be played at 11 in the morning! Who cares?

Most of the other European countries are at least an hour ahead of England. So where you would see a 17:55 GMT kick off time in Europe would actually be at least 18:55 CET.

Apart from in Portugal, where the situation was the same for Sporting fans against us this season. I seem to recall it being very quiet to begin with in that game as the Sporting fans were still making their way to the stadium.

Obviously the timing is all about tv. We all know that and it’s been this way for a number of years and, personally, i’m all in favour of more push-back from us fans and taking back control. So, in that sense, fair play to the AST for doing their bit. But I may be being a cynic here but am I the only one who wonders why the AST are writing to UEFA now? Why not when the rules around kick-off times were written a few years ago, or confirmed at the start of the season? Why not when many… Read more »

No Gus. International fans are now more important than the local catchment area fans. Arsenal and the EPL teams are no longer the local club like back in the 80s 90s. There are billions of dollars from TV and other international commercial deals pouring in now You wont get that as a local club, look at how sad the Serie A is right now Back in the 80s 90s I can only get to watch Arsenal on TV only when we are at the top of the table as TV telecast is only once a week and shows only the… Read more »

Basically I was taking a small dig at the rampant opportunism of the AST, so i’m not sure of the relevance of your comment to mine. But, I don’t agree with most of what you said anyway. There hasn’t always been a global audience of the current size for the English game and most of that audience had it’s imagination first captured by the atmosphere of the games/stadiums in England. The match-going fan is integral to that very atmosphere and spectacle and, without it, there is no guarantee that the international audience will also be sustained. So, whilst it’s absolutely… Read more »

Off topic and you guys probably know this already but on a Europa League match day UEFA take over the Arsenal match day programme, it’s not an Arsenal product. They also say the match comes from “The Arsenal Stadium” to avoid any clash with sponsors.

A Different George
Reply to  Robstar

I think they do this in all Champions League as well as Europa League matches. Bayern play in “Munich Stadium” (or maybe it’s “Bayern”) rather than the Allianz. This is one of the only things UEFA does that I support.

Jim
Reply to  A Different George

I was in Lisbon for our 5.55pm kick off there and it was a perfect time to enjoy a few beers after the game. Might also suit our players to be home couple hours earlier with a league game coming up on Sunday

Yeah, but what time did you finish work that day?

I live in Milan and have recently been to two early European kick offs at the San siro, tot*enham-inter and arsenal-Milan. Of course an early kick of in Italy is 18:55 rather than 17:55, but both games outside the stadium was electric 3-4 hours before kick off, and come kick off there wasn’t an empty seat in the house(forgetting the away end). Of course I agree that these early kick offs are a problem, but often the empty seats are down to a matter of priorities with our fans.

Half the Arsenal fans show up 20 mins late for the 8:00 p.m. kickoffs, and then leave 20 mins early before the end. This kickoff time should be perfect – they can miss the entire thing, with a good excuse. We’ll still claim a sell out!