BATE Borisov 1-0 Arsenal: By the numbers

There is no easy way to write this, this was a very poor result for Arsenal. This was one of the worst performances I have seen from Arsenal in a competitive match in some time, especially when you consider the competition that Arsenal were up against.

There is still at least 90 minutes left in this tie but Arsenal have put themselves in a position where they have an uphill climb to move on to the round of 16 of the Europa League.

BATE Borisov 1-0 Arsenal: By the graphs 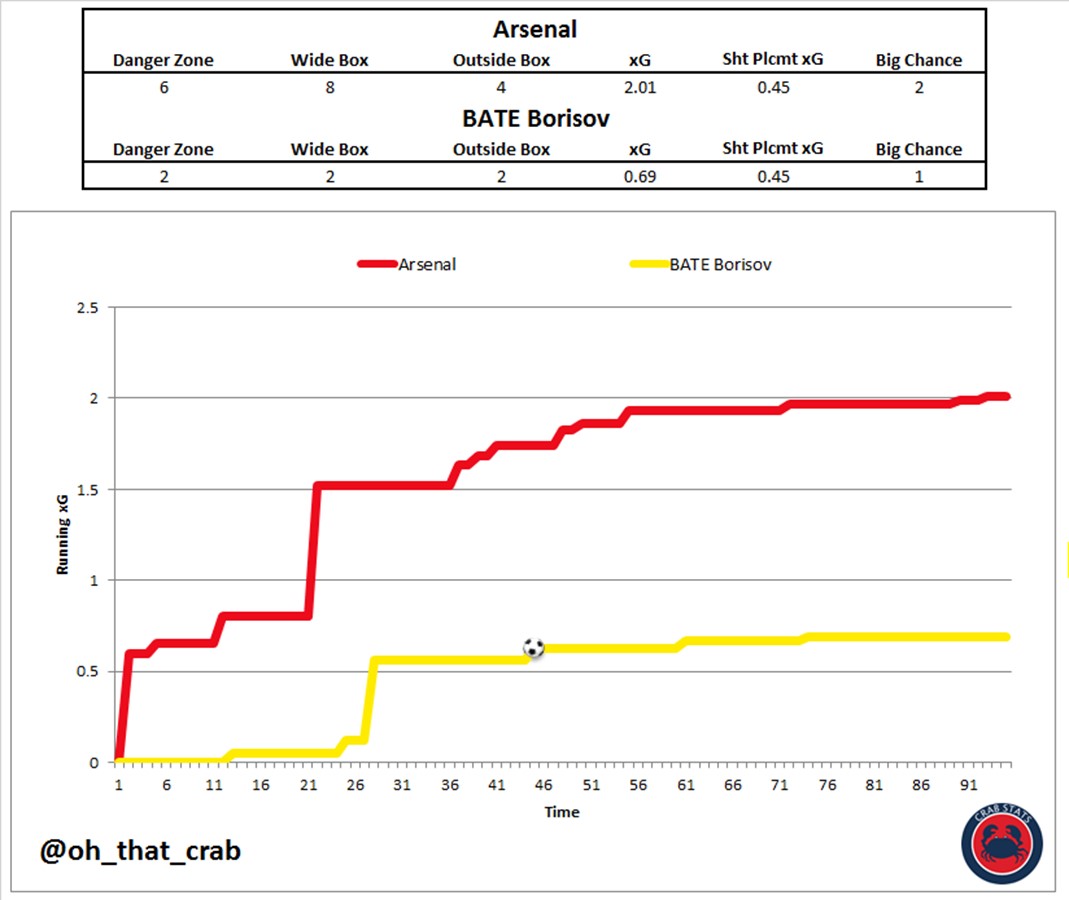 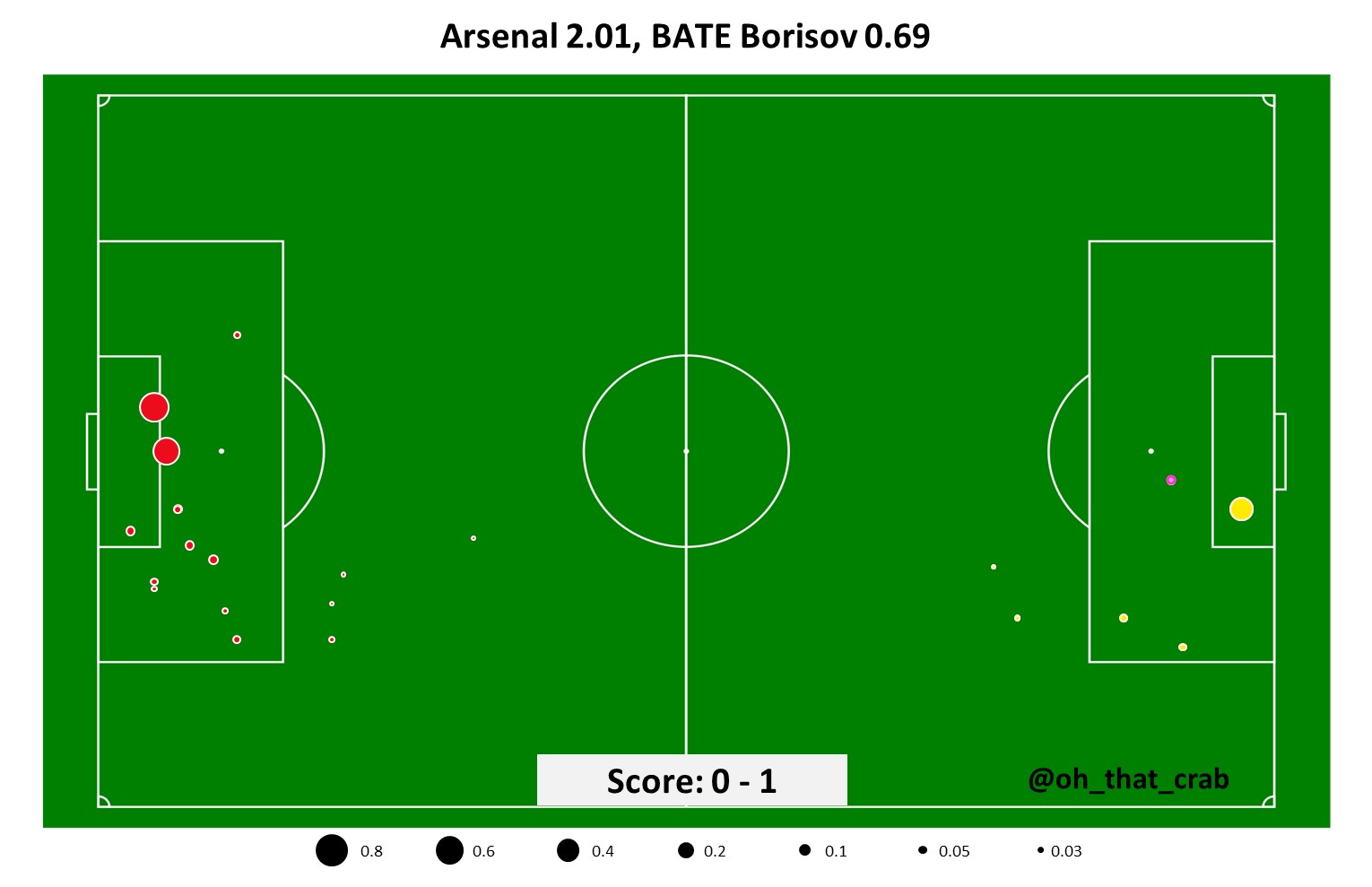 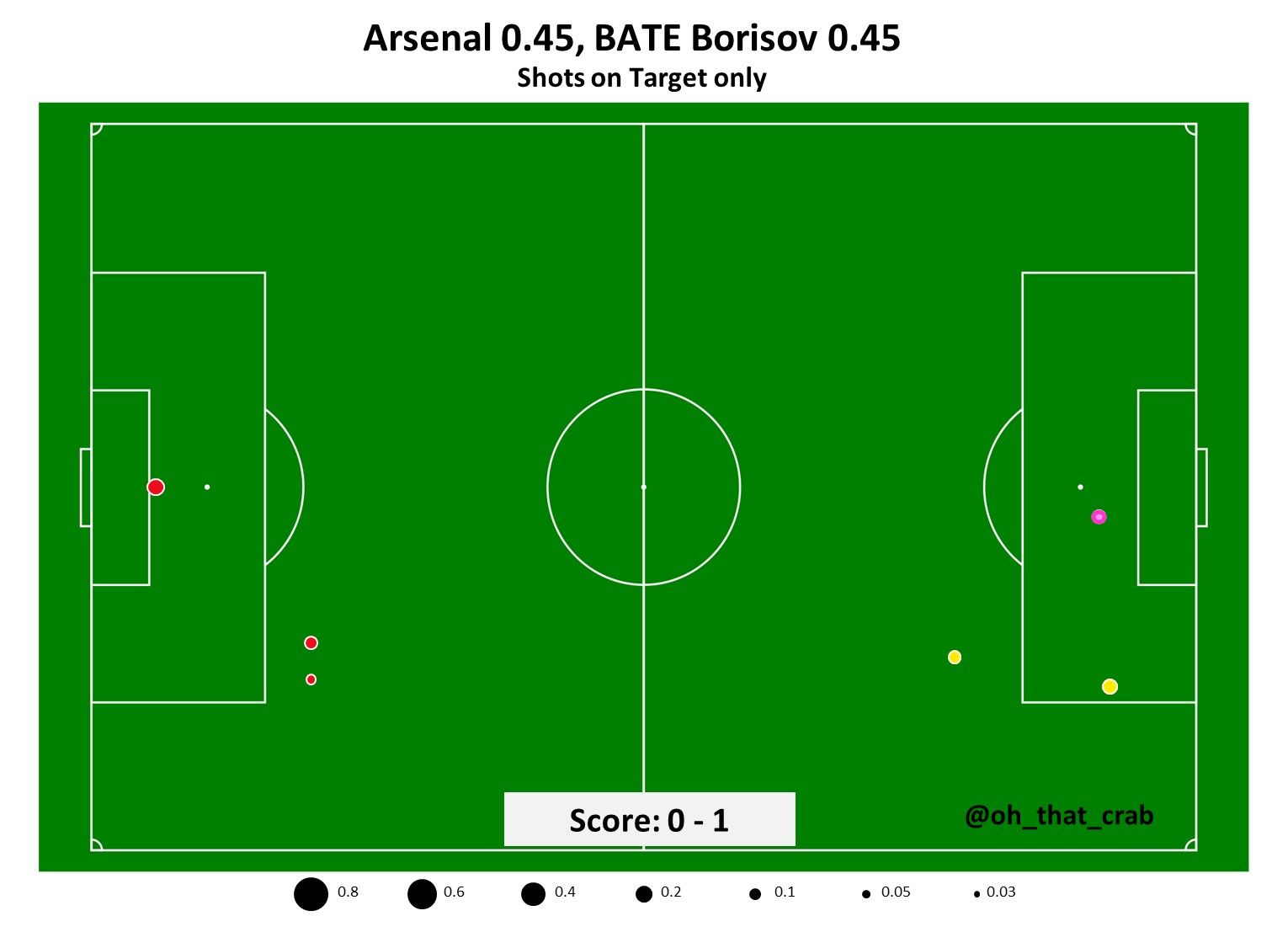 BATE Borisov 1-0 Arsenal: By the numbers

63 – The number of days since BATE had last played a competitive match, they really had that rest advantage

1521 – The ELO Rating of BATE according to Club ELO, that is the second lowest rating of any team in the Europa League. This is on par with Championship teams like Aston Villa, Swansea City and Bristol City. It is however a higher rating than the team that Arsenal struggled to beat over the weekend in Huddersfield Town with a rating of 1502

BATE Borisov are not a high quality team, you are not likely to confuse them with one of Europe’s elite teams any time soon. This is the same team that Arsenal beat on aggregate 10-2 last season and 2-4 away last year with a team that was very heavily rotated.

Arsenal fail to take their chances early, then… well not much

2 – The total big chances created by Arsenal in this match, the first was the Henrikh Mkhitaryan one on one that was saved and the second was the Alexandre Lacazette header that was missed.

40 – The total number of touches that Arsenal had in the box in this match, of which just 14 came in the second half when Arsenal needed a goal.

308 – Final third touches that Arsenal had in this match, of which 188 came in the second half. Overall 40.3% of their touches in this match were in the final third.

26 – Crosses attempts by Arsenal, of which 18 were from open play and 12 of those came in the second half.

In the opening 20 minutes of the match Arsenal looked dangerous, cutting open BATE several times. After that Arsenal were neutralized pretty effectively by the combination a BATE’s deep block and their own inability to find the final pass. Once they went down a goal, Arsenal created just one very dangerous move and it did end up in a goal but it was chalked off to a very marginal offside call. In the end Arsenal once again failed to turn a lot of possession into shots.

Lacazette struggles and is sent off

This was a tough match for Alexandre Lacazette and ended with him earning a red card and suspension for the second leg. The numbers above show the issues that Arsenal had creating chances and Lacazette was the main culprit in being let down by the service of this teammates.

7 – Chances created by the wingbacks, all seven from Sead Kolasinac. Including both big chances.

10 – Passes completed by the wingbacks into the box of 15 attempts.

1 – Cross completed by the wingbacks of 3 attempts.

74% – Pass completion percentage for the wingbacks

6 – Tackles, all by Ainsley Maitland-Niles

3 – Aerial duels lost, including the duel from the corner that turned into the goal

On the flip side, when BATE did attack they attacked the found the most joy going after the area that Kolasinac vacated. The goal that BATE did score came from Kolasinac getting out jumped on a corner kick.

Previous articleEmery: I trust the players to win the second leg
Next articleLacazette apologises for red card as Emery says he must control his frustrations

I’m going to be calm and polite and say underwhelming.
Fucking dross!

This is pretty poor all around. The first few minutes I thought we’d be okay, then everything went downhill fast. How long can we continue playing this type of football? It’s the total opposite of what most Arsenal fans are used to. There’s no beauty, speed of attack, or quick passing, just lump it to a wingback so they can either cross it or try and find someone with a cutback in the box. It’s sucking the joy out of me, the reason I watch Arsenal play.

One of the worst performances I’ve seen by Arsenal! And we have played some pretty shit football recently. Losing that game is embarrassing. Emery! You completely ruined my Valentine’s evening, and my wife is not very happy with you.

After that last night, I would say Unai hasn’t got a bloody clue

This side lost at home to Ostersund last season

This side? That side had a 3-away goal advantage and had Welbz as the striker (not our Laca, Auba), Elneny & AMN, Jack, Chambers, Holding (who were back-up CB’s) and Ospina in Goal. That was certainly not our first choice, full strength side like it was last night.

So next week we could be knocked out of the Europa league… by Bate Borisov…yes you read that right!! Words fail me…….
I’m sick of these lacklustre performances where we just limp over the finish line, not that we managed that last night! I’m sick of Ozil being left out because Unai doesn’t like him, I’m sick of our away games hoodoo & last but not least I’m sick of being a laughing stock

Oh my! Our evening was ruined terribly.

It was my birthday as well. So I recorded the match, confident of staying away from any match related stuff after the team news. Took the family for a nice dinner.

Came back to watch the recording and till the send off (not blaming Lacazette), I was hoping we’ll manage to score one!

Boy we were so poor, terrible. How did we manage the 22 match unbeaten run!

Tell me about it.

Thank you for the wish.

We’re not the first ‘big team’ to slip up against a determined small team in the Europa League. It’s happened to Dortmund, Napoli, Man Utd etc in recent seasons. Long journeys, shite pitches, bad weather and dogged teams can do that. So i don’t think too much should be made of that. More of a concern is that we haven’t really played well since the 4-2.

Stop patronizing the fans…Emery is losing it and everyone sees that…we are not the teams you mention up there..we are Arsenal and we have our unique ways of playing which Unary is now ruining..
We never lose such games before no matter how bad the team was..Rem last season though Atetico knocked us out but we were pleased with the performance…

What is the unique way of playing you mention? Arsenal were drastically different under Wenger to Graham.

Remember when Arsenal playing style used to be compared to Barcelona,that was what wenger left behind our unique way of playing(we scored goals no teams could score)….look now and compare…

If we continue in this vain, Arsenal will become a club that loses its commercial appeal along with its identity. Our identity has played such a big role in our commercial performance over the last 15 years and its being underestimated. We went almost 10 years without a trophy and our identity was our saving grace. If we go the route of being happy with sixth AND playing badly, we lose out on far more than people are thinking. We have already being surpassed by Man City, Liverpool and Chelsea, while the Spuds are on the brink of overtaking us… Read more »

I think I read somewhere that the entire Bate Borisov team has a wage bill of 200,000 pounds per week or just over half an Ozil.

The worst part about Emery-ball is that we are now soooooo boring to watch. Win or lose, Arsenal were always an entertaining team to watch for the neutrals.

So we should statistically have won this fixture 2-1 (0,69)We should have scored two in the first half and that would have changed the game. From the shotplacement xG it should have been a nill-nill draw. But I’m mot a stats guy so I can spew my personal ramlings because I’m entitled to my opinions. Emerys is the wrong coach for Arsenal. Arsenal can’t defend. Where’s the player that can deliver the final ball? Why is özil on the bench? Emery doesn’t play our star player because he is a bad coach. Why did he change the formation again? Bellerin… Read more »

as a non season ticket holder i get my scraps from friends/family to attend less than gold fixtures, ive always been happy to fill such seats be it Huddersfield, Fulham, Burnley etc.. i always enjoy my day out on these games and no ever where i am sat i can’t help when looking towards our opposition supporters a bit of sympathy for their no points journey.. Hence i do go to away games aswell and can only think this will begin to happen to us, a once great team who would be competitive in loss if not take home 1… Read more »