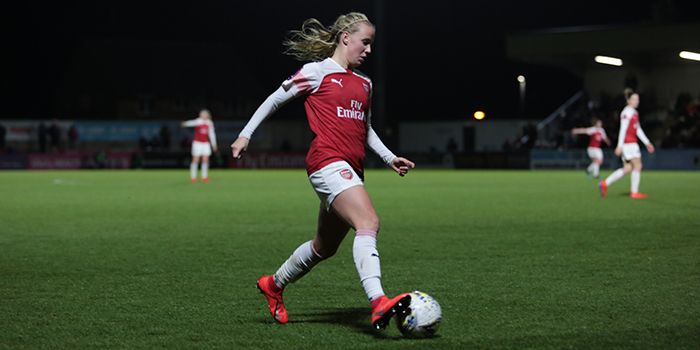 Arsenal Women qualified for the Continental Tyres Cup Final with a 2-1 victory over Manchester United on Thursday night, setting up a repeat of last year’s final against Manchester City. Tim Stillman spoke to Gunners striker Beth Mead immediately after the match, exclusively for Arseblog News.

On the importance of Arsenal scoring an early goal….
It was important to score early, we knew they would start fast and try to come at us. They’re a really good team, their players are certainly WSL standard and we knew they would give it everything and try to fly out of the traps. Sometimes you’ve got to weather a bit of a storm and we did that at the beginning and the end of the game. But we put ourselves in a good position and deserved to qualify for the final.

On getting to yet another domestic cup final…
It’s an exciting few weeks with the Chelsea game in the Cup and now Manchester City in the Conti Cup Final. We want to win everything here, so every game is a cup final in a sense. We treat every game the same because we have our eyes on every trophy and that’s what we’ll continue to do over this period.

On Manchester United tiring in the second half….
They pressed very hard in the first half and we knew it would open spaces for us if we were smart and picked the right passes when the opportunity came up and that’s what we did. Unfortunately we couldn’t quite get that 3rd goal that we probably deserved in the second half to give us more of a cushion. But they defended very well and their goalkeeper made some good saves.

? @VivianneMiedema scores again …and didn't she make sure of it!

On facing Manchester City in the final again….
We played them and beat them last year with a really good performance. We know them well and they’re a top quality team, but we need to focus on what we’ll do and try to get some players back to fitness if we can and just keep going.

On playing as an out and out winger this season….
I really enjoy playing on the wing, I’ve become an assister rather than a goalscorer, but I know I need to score more. Today I got in some good positions and had some chances and I just have to keep plugging away and the goals will come. I had a header at the end and I don’t know what happened! I don’t know if it hit the keeper or the cross bar, but I just know it didn’t go into the net. [It hit the crossbar].

On playing with a finisher like Vivianne Miedema….
She just needs one chance and she’ll score a goal for you and it’s nice to know that you have someone like that in the team!

With thanks to Jason Ilagan of Humans of the Arsenal for the image.

Living in the States, I am grateful to all who contribute to Arseblog. It’s great to hear how the Arsenal women are doing. Thank you.

Hope the win some silverware this season! Such a good team. Once they get some squad depth in the next transfer window hopefully will be a real force to contend with

I don’t think transfers are the issue as the assembled squad is excellent (unlike the men’s team at the moment). The problem is we have a sick bay full of top class international players all nursing long term injuries. That is what we need to try and avoid for the future and we’ll be back to the days of winning quadruples!

I agree – top talent everywhere you look, promising kids, but the squad is still a few players short, regardless of the packed physioroom. The versatility of most of our players does compensate to some extent, however.

That first goal has to be a contender for assist of the season!
I didn’t know Dominique had a pass like that in her. One kick from the half way line and the entire United defense was bypassed leaving Vivianne to do what she does.
Imagine what a nightmare of team selection Joe will have if we ever arrive at the situation where the whole squad is fit at the same time. A problem many other WSL managers would like to have no doubt!

Very well done to Beth, Viv, Joe and all the girls. I was delighted to see that Joe put out a strong, experienced side, because this tie had all the makings of a banana skin.

Bloodworth’s assist vying with Katie McCabe’s for assist of the season so far, but I think Bloodworth edges it because she was under so much pressure when she made it. She isn’t quite the same player as Waelti, but she will give her some stiff competition for that position if her form continues. And another defensive masterclass from Louise Quinn. I love this squad.

Great insights from Beth. Thanks for the interview, Tim.

It is good to be beating teams like Man Utd, even though they are a Championship side. What a signing Miedema has been!

I hope we can do the double over Man City. Best of luck to Joe and his squad. Their performances, particularly in the first half of the WSL season make me proud to support this great club.