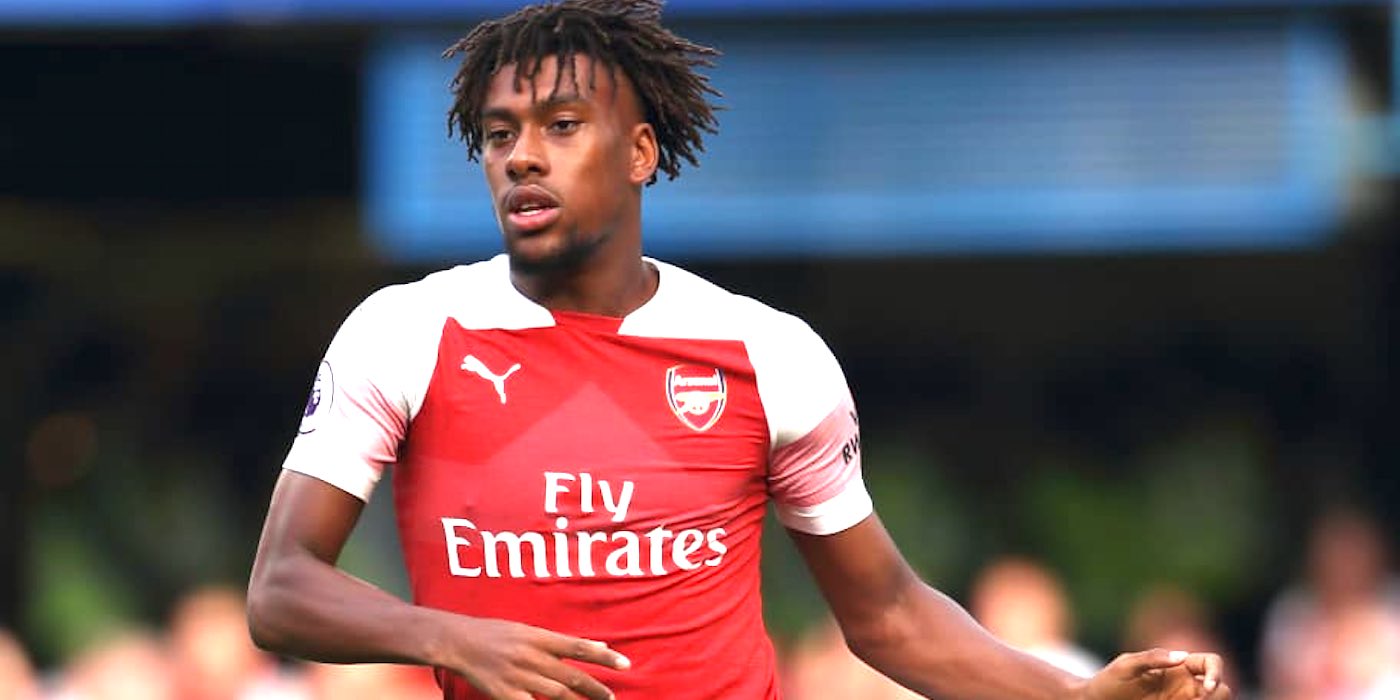 Although he does draw some criticism from sections of the Arsenal fanbase, Alex Iwobi is a player who has improved this season under Unai Emery.

With four goals and seven assists to this name this season, he’s already bettered last season’s contribution by one goal, and given that we’re still in February he could significantly upgrade his stats by the end of the season.

The Arsenal boss is pleased with what he’s got from him so far, but is demanding more from the 22 year old who can still be a bit hit and miss when it comes to producing in the final third.

He got an assist on Sunday in the 2-0 win over Southampton, looks like he’s regaining some of the confidence that appeared to have deserted him earlier in the campaign, and Emery is insisting there’s more in the midfielder’s locker.

“I am very happy and I think he is working a lot to improve,” he said.

“He has energy, he has quality, he has things to improve, but he can do that.

“For us, we have to be demanding with him and he himself being demanding to improve the things that he can get better at in his qualities.

“When he’s getting into the attacking third, into the box, to be calm to decide the last action with assists and scoring more.

“But he is giving us a lot of attacking moments and opening space for other players when they are arriving to the ball.”

The Nigerian international went off with cramp on Sunday but was in full training today.

Whether he starts tomorrow remains to be seen with Emery again stressing the need to rotate ahead of North London derby on Saturday.

I think a lot of those giving him flak forget the fact he’s only 22. He’s come on leaps and bounds under Emery and is undoubtedly one of the highlights of our season.
A little more composure on the final pass/shot is still needed but that will come with confidence and time.

Thought he was one of our best players V southampton on sunday and has been a positive recently. Can you imagine how much of a positive he could be without the flak and with more encouragement.

Right. And as Arsenal we have a reputation for developing young players and part of that should be supporting them when they go through somewhat lean patches that are only natural at their age. Nice to see Iwobi’s game being recognized especially since he seemed to be getting a lot of criticism quite recently.

Exactly. In fact he us the catalyst to many of our best moves. There’s a bunch of players who are the target for imaginary over criticism. Mustafi another. Sure he makes mistakes but no more than say Torreira. Against BHA, Soton away and Liverpool, the popular dimunitive Uruguayan gave away the ball 5 or 6 times, 3 of which led directly to goals That’s 8 points that cost us. Mustafi against Soton put out 3 or 4 good long balls from deep in defense finding our forwards very quickly. One led to the Lacs chance thanks to the clever ball… Read more »

Santori, you moan that mustafi is unfairly criticised in nearly every post, also you then unfairly criticise the same player(s) I.e torreira and others literally every time you post. People like you make me sick, most of this world and large parts of the fan base are just like you and it’s sad to see. And these essays you write, please fit it in to a paragraph or two please as most is waffle but not the good kind like on arsecasts so you could possibly leave most out 😉

There are some players whose faults come across more negatively than others. I think Iwobi falls in this category with the likes of özil and his body language. Alexis was the complete opposite.

Actually, now that you made me think of it.. Iwobi has been one of the highlights this season, it has been fun seeing him play and he will only become more efficient (hopefully). thanks for the perspective my friend!

One of those players you really want to do well, you can see he has some of that jay jay gene at times with his skill on the ball. Like emery says it’s sometimes his decision making that lets him down, as he takes a split second to make a difference. Otherwise he kind of has thay bolasie like unpredictability about him at times.

Jay Jay was very smart and gifted with dribbles and had powerful shots but his understanding of tactics was below average. The nephew is even doing better in that departement.

His creativity is imo underrated. Just from watching the games, it actually seems like he produces alot of passes that leads to assists.

He has. Two key passes against Huddersfield leading to goals.

He is a catalyst (like Alexis) who can create space for us.

We ha e needed an equal force on the right to be less reliant on Bellerin or AMN bombing forward.

Sadly that has not been address by hit and Mslintat even when Arsene was in charge.

He’s easily been one of our better players this season. Clearly everyone agrees his end product could be better, but far too often he’s looked like the only player likely of making anything happen going forward in games.

Some of the best play coming from our left with Iwobi and Kolasinac.

Quick feet Iwobi and ability to take on players, he commits opponents and pulls them out of position.

Some great lay offs too to Ramsey.

All he needs is a bit of conviction shooting and end product in front if goal. That will come. He’s only 23.

We need to keep this sort of telepathic fluency in the attack.

But if he is iffy with a knock, save him for Spurts.

Exactly, our only play comes down the left, that doesn’t mean it’s very effective though.

Never understood the flak this guy gets. Can unlock defences with a pass, is a physical threat and has brilliant feet. Rare combination of traits.

If being demanding to a player includes freezing the highest paid player due to attendance or disciplinary issues, even if I like that player so much, I am with Emery. Attitude and attendance are really big issues regardless any company u sign a contract with.

No doubt iwobi can do more especially when he’s in the final third, but he like most players except for the elites like Messi, need players to link up with other than just an attacking wing back on the overlap, made worse that it’s our only attacking tool.

Only hope with emery is that he will start playing ozil, Suarez, mkhi, Ramsey more so that they can combine with iwobi. That way we can see him playing better.

He has 4 league assists playing alongside two of the best strikers in the league, who have 15 and 11 league goals respectively. Are Lacazette and Aubameyang not good enough?!?

Eh? You’re missing the point. I’m not talking about him feeding the strikers. I’m talking about when we have an imbalanced squad where he was our sole attacking midfielder amongst a sea of no.6s in midfield (Xhaka, Lucas and Guendouzi). No where did I even mention about our striking force. Reckon the fact that it was perceived he should improve was during our poor run where our only attacking option was iwobi creating by himself or playing in Seo on the overlap for his cutback. He looked better with mkhi and Ramsey/ozil in the team with him in the last… Read more »

No, you’re missing the point. If you’re an attacking midfielder and you only have 4 assists whilst playing alongside 2 of the most clinical strikers in the world its you thats doing something wrong, not them. They’re still scoring.

What you’re really saying is that he needs other attacking midfielders to pick up the slack of his lack of creativity, which really means he needs to be replaced.

He’s not a top class attacking midfielder if his sole attacking contribution is passing it to an overlapping defender, there has to be more to his game than that.

Nope you really do miss the point. Read again what I’ve wrote and try to comprehend it instead of reacting.

I’m saying he can’t be tasked as the single attacking source in midfield all on his own. It’s a team game. I’m criticising emery’s tactical decision to field 1 AM in him and 2 or 3 DM behind him and then expect him to dominate opponents defenses.

I get that people are defensive over him and that includes Arseblog by why do you feel the need to lie?

He hasn’t got 4 goals and 7 assists and wasn’t credited with an assist on the weekend either.

His stats on whoscored have him down for 4 goals and 3 assists, so why don’t you just tell the truth?

Take a chill pill bruv… It is 4 goals and 6 assists in all competitions… A goal in FA cup and 2 assists in Europa. Not sure why he wasn’t credited with the assist for Mkhitaryan’s goal in the last match (Southampton game)

He didn’t get an assist in the last match because the pass was deflected into Mkhitaryan’s path, hence he wasn’t passing it to him.

And I will make an issue of it because it’s not the truth and people’s issue with him is that his numbers aren’t good enough. Adding a few assists on doesn’t do anyone any favours.

He is simply our best attacking midfileder this season. He gets the stick because you think he takes the place of your favourite player. Iwobi is already work 5 Ozil. He can pass on players, he is strong, his vision is as good as Ozil and he can score too!

My problem with Iwobi is that he’s not very good, a fact born out by what i see with my eyes and the statistics that prove it.

I want Arsenal to be successful and that requires having the best players, of which he doesn’t qualify. And age isn’t a mitigating factor as Martial and Sane are the same age, both of whom have vastly superior numbers.

Big fan of his. I’m still slyly interested to see if he could ever develop to be a CM in the mould of a Diaby type.

He’s got the size and physicality for it, his conditioning has improved, he would be one of the few CMs that can carry the ball in our midfield thus avoiding the press, and it relieves him of so much pressure to score and assist in the final third.

A 3-man midfield with Iwobi in there would be interesting.

He would certainly replace Diabys main ability of giving the ball away in dangerous positions!

Diaby, like Wilshere and Rosicky got exponentially better the more they were injured!!

You need to go and have a lie down or a stiff drink!

I think I know what the C stands for now.

Give the Nigerian Messi the Key of the team! He’ll be an absolute Legend!

So glad he signed a new contract. He can be one heck of a player if adds some end product

I dont question his effort. At all. But I dont see him as somebody who starts on an Englush UCL club.