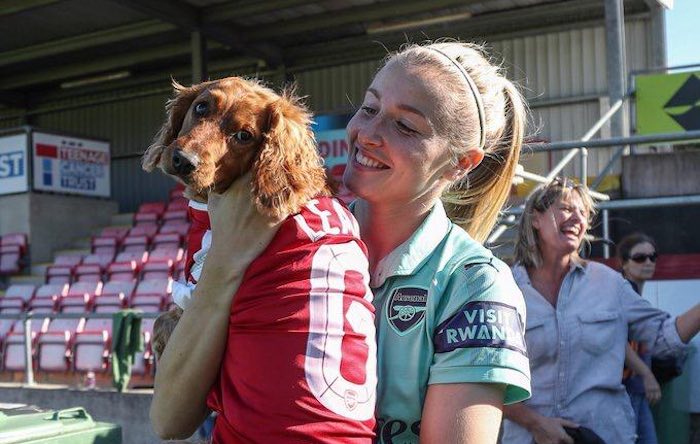 On losing on penalties….

We learned some lessons today, but when you go that far, the performance doesn’t concern you, you just want to get the win. We’re really disappointed, it was a shame because we worked so hard to stay in the game for so long and how resilient we were. Last weekend we played Chelsea and we were walked over at times, which was not acceptable. Everybody in an Arsenal shirt knows that, so to fight so hard today and to lose on penalties was tough to take.

On starting without Vivianne Miedema…..

It’s almost comical how much has gone against us in terms of injuries this season. We still had a lot of pace up there and Beth [Mead] is a class player. We wanted to draw their defence out and try to get in behind them with forward runs from Danielle van de Donk.

On Arsenal not being as technically precise as usual….

We weren’t at the standard on the ball that we want to be. Us and City have had three game weeks this week and when they have as much of the ball as they had, it’s hard when you get possession, we had to fight so hard to get it and when you’re on it in that scenario, it’s hard. Every time we did manage to get the ball down and play, we created something.

It was frustrating, everything just seemed a little too far out of reach, or every ball was slightly over or under hit. It’s not how we want to play when we get the ball, but with the injuries and the circumstances we were playing under it was tough and then when you start to get tired, it gets even harder.

On going more direct in the second half….

It wasn’t necessarily the plan, but we did highlight that we could make them uncomfortable in certain areas. I thought we were ok playing out from the back, but things weren’t quite coming off for us, so it was maybe the time to go a little more direct and put them under pressure. But we wanted to get them away from our goal a bit too.

Once you’ve been bunked up for a while, the temptation is always there to do that and we had fast players on the counter. The girls upfront held the ball up really well for us and I think that actually worked quite well for us at times.

On going away with England for two weeks now…

I’ll admit I am not looking forward to seeing some of the City girls tomorrow when we meet up for England! But I think it will be a good thing. What Arsenal showed today was resilience and when it comes to winning the league, which is our sole focus and purpose now, we will give absolutely everything like you’ve seen out there today.

That gives you a good idea of the character and resilience of this team. But also we’ve got players that know what it means to be Arsenal and we’ve got new players that already know what that means. Today we maybe didn’t play the Arsenal way, but that character is what it takes to play for a top team to take a game as far as you can, to fight and when it comes to the league, that’s exactly what we will do. We’re pissed off now and we’ve only got one target to focus on and we’ll give it every thing we’ve got.

So so unlucky. Always disgusted when Arsenal lose to plastic City

Ever so gutted for them.
Fantastic attitude though.
After everything that squad has been through with injuries it will be such a massive reward for their collective hard work and spirit.

It was a hard game to watch, but a good team performance that just came up short against a very strong team… and a great day out in the sun 🙂

Yes a tough watch but there were chances to win. Two very good teams so it is a pity that at 0-0 after two hours the cup could not be shared like the Community Shield. I’ve never liked Bardsley anyway she’s not even British never mind England No.1! Her antics were not very sportsmanlike as evidenced by the yellow card thus putting DVD off her stroke and losing us the game! Sour grapes hah! I’ll probably be cheering her on come Wednesday night since quite a few of the players from today’s game, Leah included, are straight off to the… Read more »

Have to agree the antics of their keeper left a sour taste in my mouth. Also it seemed the BBC don’t like to show Arsenal fans. Sour grapes from me. As for Arsenal it was a gutsy performance and I am proud of the girls. Hopefully we can clinch the league and put this behind us.

Sad that they couldn’t win it. Leah’s mature and has both feet grounded. I see titles in her future.

Well, darn. A real shame they couldn’t win it, but penalties are penalties. At the very least though, an Arsenal side ravaged by injury & fatigue (who knows what could have happened in a tight 0-0 game with our star striker starting) took a full strength Man City side the distance, there’s no shame in this loss IMO. Onwards and upwards!

Also, Williamson’s probably been my player of the season so far. The best compliment I could give is how invisible she’s been – she’s just slotted in and done the job.