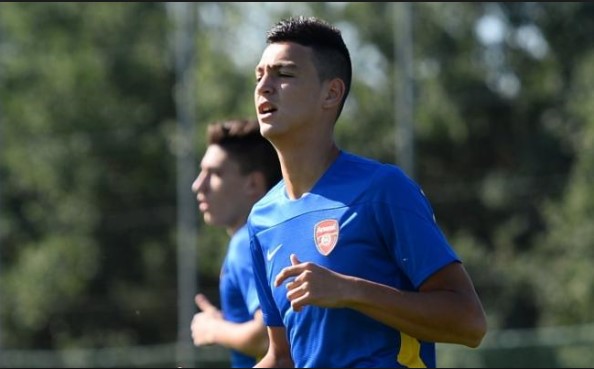 Yesterday’s Europa League draw saw Arsenal pitted against Rennes in the last-16 stage and, while to many the majority of the French club’s squad will be unfamiliar, there are two players who have a point to prove to the Gunners.

Defender Ramy Bensebaini and striker M’Baye Niang both had trials with Arsenal but neither player ended up being offered a contract.

Niang trained with the first-team squad and showed some encouraging signs but the attacker eventually signed for AC Milan and later had a spell on loan in the Premier League with Watford prior to ending up at Rennes.

Bensebaini, meanwhile, was on trial at Arsenal in 2013 and the defender certainly didn’t make a positive impression.

Although he is now an Algeria international, Bensebaini was woefully out of his depth when with the Gunners and was part of the team that was thrashed 7-1 by Luton Town in a pre-season friendly.

Despite training with the senior squad on one occasion, it came as no surprise that Arsenal chose not to bring Bensebaini to the club on a permanent basis.

Rather than being disheartened by the setback, though, Bensebaini has worked extremely hard to improve and he has become a very important player for Rennes.

Both Bensebaini and Niang were on the scoresheet as Rennes beat Real Betis 3-1 in the second leg of their round of 32 tie and they will be especially eager to make an impact against Arsenal.

Their situations also serve as evidence that it is possible for players to bounce back and impress at a relatively high level even if they suffer disappointment as youngsters.

AT LAST WE WILL HAVE REVENGE

People are always saying we need a better atmosphere at the emirates. Here’s one way to start the ball rolling :

I’m pretty sure Nainggolan is out for the first leg, accumulated too many yellow cards

We should have signed Bensebaini in 2013 when we had the chance because we never replaced Igors Stepanovs.
And if we signed Niang instead of Sanchez in 2014, I’m pretty confident that we would have beaten Leicester to the league in 2016.
Spurs still would have finished 3rd in a two horse race.

Why is Sanchez to blame for our demise that season? The whole team + management should be blamed.

Starts with S ends with M.

In another news, Sp*rs lost. Best way to start your day.
So much of title challenge talk but in the end, we all know, will get another DVD.

We could be 1 point behind them this time next week.