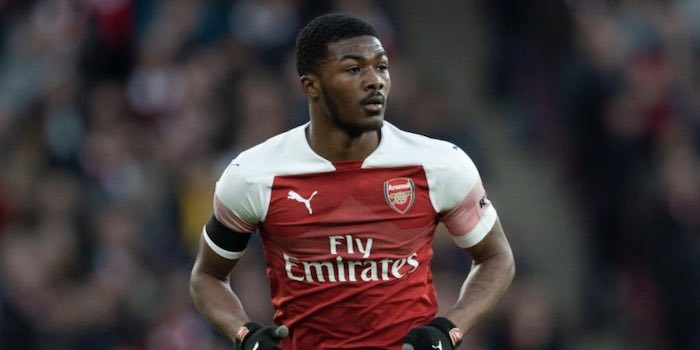 Arsenal have confirmed that Ainsley Maitland-Niles is back in full training after recovering from illness.

The England under-21 international missed the home wins against BATE Borisov and Southampton having picked up the bug that was doing the rounds at London Colney.

He’ll likely replace Stephan Lichtsteiner in the starting lineup for Wednesday’s game against Bournemouth with the Swiss still struggling to recover from the back problem that forced him off on Saturday.

Alex Iwobi, arguably our man of the match against the Saints, is also a doubt. He picked up a knock to his right ankle and could be rested ahead of the North London derby at Wembley next weekend.

Having spoken about the importance of rotating his players this week, there could be other changes in midfield. Matteo Guendouzi, Mesut Ozil and Denis Suarez are all options should the boss choose to rest Lucas Torreira, Henrikh Mkhitaryan or Aaron Ramsey.

At the back, there’s also a chance to give more minutes to Dinos Mavropanos who got his first minutes of the season at Manchester City three weeks ago.

Let’s see what Dinos and Denis can do…

I think he’s more likely to play Ozil tomorrow then bench him at the weekend. The most interesting one will be Iwobi – apart from Auba who else would really play on the left wing?

As far as I’m aware, Dennis is quite comfortable out there.

I hope we stick with a back four

love the renewed optimism than comes with the sun!! COYG lets nick 3rd place from the over performing white trash team next door.

Playing AMN will likely force Emery to convert to back three

Unless he plays Jenkinson.

He can play Maitland-Niles in a back four, no problem.

If he has played him in a back 4 on the left, why wouldn’t he on the right?

Rightback is an important position against Bournemouth as Fraser seems to develop into quite a classy player for them on the left wing. Will be a handful for whoever plays there.

Need a strong team. 3 points is 3 points and in the top 4 race each match is as important as the rest

I wouldn’t risk Mavropanos. This is the business end if things and he us largely unproven. We need stability and common understanding at the back It’s going to be one of Koscielny (wear and tear issues) or Sokratis and Mustafi or all 3 or maybe Monreal. Mustafi provided some excellent out balls ftom the back to our forwards one of which led to a quick transition and a superb chance for Laca. He was slightly culpable fir the offside trap that led to the Redmond chance but so was Sokratis. In that he did the right thing, got goal side,… Read more »

He is indispensable bc he is one of the few who can take on players and pull the other side out of position.

No surprise all the good work comes Chiefly from the left between Iwobi and Kolasinac.

That said if he is carrying a niggle, he needs to be protected for the Spurts game.

But we need to sustain output over a busy period so Guendouzi will rotate in with one or the other.

Dennis could settle there as well. No mention of mediocre Elneny.

Sell Elneny and Jenkinson. Neither up to standard.

I want dino to stat. Kosc witll be constantly struggling this season. Its called age