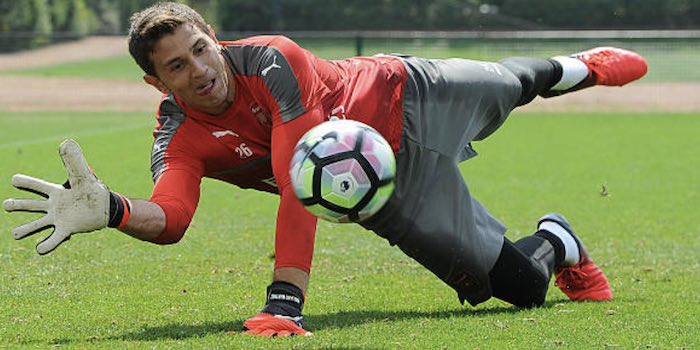 Emi Martinez says that the club told him he’s been earmarked to replace Petr Cech in the squad next season when the veteran retires from the game at the end of this campaign.

The 26 year old joined Reading on loan last week, where hopefully he’ll get plenty of  football under his belt, and although he’s not thinking as far ahead as the summer, the incentive has been given to him as he looks to kick his career on.

Despite being the same age as current number 1 Bernd Leno, he has made just 60 first team appearances for Arsenal and a host loan clubs, as opposed to the 350+ the German has to his name for Bayer Leverkeusen, Arsenal and the German national side.

Martinez made his debut for the Royals last weekend in their 1-1 draw with Bolton, and spoke about his hopes for this season and beyond.

“I have three years left on my contract at Arsenal,” he said.

‘Now Cech is retiring I was told when I came to Reading that next year they want me to be the backup. But I’m not thinking about next season yet.

“I am not thinking about what may happen in the summer, we will look at it then. All I know is Reading is my team now.

“I want to play regular games and I want to help Reading.”

You’d imagine his chances of making that step up are dependent on how he performs during this loan spell, so best of luck top him.

Check out today’s brand new Arsecast, discussing the transfer window and much more

Martinez: We’ll do our best to cover for Leno

Surely he’ll have to number 2 at some point next season. He’s going to feel very uncomfortable otherwise.

still have Ospina too

I think Ospinas contract runs out this summer?

Leno me, I’ll be your friend
Reply to  Eduardo

Guys, please don’t ruin a perfectly good poo pun with needless facts and data. Some of us only arrive for the poo, and we don’t want it tainted!

Always a worry when the number 2 runs out, especially in the summer.

Leno me, I’ll be your friend
Reply to  Zenithreptile

Excellent point, though never forget the difficulty at this time of year to find a number 2 you can easily push out in the cold. They’ve gotta be solid.

He’s even worse than Leno

Kwame Ampadu Down
Reply to  martin

Ospina. The Man They Couldn’t Sell.
I really hope his contract is up this year so we don’t face another farcical summer trying to offload him.

Richie
Reply to  Kwame Ampadu Down

Nope, his contract with Arsenal is until June 2020. Napoli do have an option to buy in June 2019 though.

Kwame Ampadu Down
Reply to  Richie

Fucking hell. Ridiculous. Napoli won’t take up that option. More nonsense ahead so trying to pawn him off to anyone who will take him.

So you think Ospina is better than Leno?

He can learn, gain more experience and be better. Let’s give him a chance next season after all even Fabinski is doing well at West Ham

The West Ham fans love Fabianski he made their 3-0 defeat to Wolves a respectable score. When Fabs was at Swansea I would have taken him back!

Fabianski wasn’t strictly a bad keeper though. He perhaps was never good enough to solidify the number 1 spot. But he’s a good all round keeper. Number 2 for us was probably his level, but a number 1 for a team like Swansea or West Ham suits him.

On Martinez, I’m unconvinced. Clearly not good enough to take the number 1 spot – is he really going to push Leno up a level?

Good, this is long overdue. He’s remained nothing but professional this whole time despite all the comings and goings.

I’ve seen no reason to suggest why he shouldn’t be backup week in week out. I’m looking forward to seeing him get more consistent minutes next season.

Financially it makes sense, especially if we’re still in the Europa next season.

yep sound about right for a club not really looking to be challenging for the league for a while,
look at how much pool and chelski spent on their keepers in the summer,
still smarting from the v poor decision to get rid of sczeney , hes probs worth 50mil now.

i cant see any real improvement under emery, defence looks more porous, we always scored goals with wenger, and he would have found a place to accomodate our most creative asset,
sick of hearing people saying he don’t track or try (thats not his role)

wow! so much anger!!

No kidding. He needs to hit the showers and have a smoke.

Szcz kept Allison on the bench when they were both in Roma.
Juventus wanted him over anyone to replace the best goalkeeper, ever, as far as Im concerned.
So yeah, selling him for nothing to Juve, was a very bad decision.

That said, Ive always rated Emi too, never saw anything to suggest he was anything else than a top goalkeeper.

I believe in Bernd as well. He has everything in his locker to be one of the very best. And at some point soon, he will be.

When you say that Leno has everything in his locker, do you really think that he has command of the aerial ball? He seems like a good shot-stopper with decent distribution (although I haven’t noticed it being as phenomenal as I expected it to be, based on what we were told when he signed for us). He is quick in coming out after balls in sweeper keeper situations. But he struggles with balls crossed into the box, & that’s a rather significant deficit in the Premier League.

He has terrible distribution. Can only do so for a few yards.
He’s not much of an upgrade, but he’s 26 and hopefully can develop.

You have to be an incredible optimist. Leno has no presence, lacks command of his area and is weak at crosses with bad positional sense. Arguably one of the worst keeper signings we have made for many years. I’m not sure how you can have any confidence in him. Frankly Cech is by far the superior goalie

This conversation isn’t about Ozil…not EVERYTHING is about Ozil!

It certainly seems he’s in the running. The loan till end of season will be the test. If he fails to impress, we will be shopping in the summer for a keeper in addition to other requirements outstanding at Cback, wide player potentially a young striker, maybe a fullback. Which is why I thought it a bit premature for Cech to step down. If we should not find better option in market (Considering we have to spread the money in so many positions), and if Martinez fails to convince, we could at very least retain Cech for one more season… Read more »

Emi is a good goalkeeper who is due his chance. I think he’s good enough to have a career at Arsenal, and remember that this has been his first season with a decent goalkeeping coach. Good luck to him at Reading, they seemed to appreciate his first game for them, and I think he can improve there and do well for us next season.

I live in Reading and was made up to hear that Emi was going there. Vito tried his best and always looked great in the warm up, but then always failed to deliver unfortunately. Not sure if he’s still on the books there. Disappointed that his debut ended in the concession of a goal in stoppage time I believe. I have faith in Emi though, during the Summer I faithfully watched all the training vids the club put out. At one point he looked better than Leno IMO. Anyway I’m wishing him the best.