Arsenal dominated for 30 minutes, then self-destructed away to Rennes.

Manchester United had an impressive away winning streak of 9 matches and had everyone heaping praise on them for how they were “back” to the United of old.

While they had certainly improved under Ole Gunnar Solskjær, the performances that they had put in going into the match up against Arsenal were not at the same level as their 103 point, points per match pace suggested (2.7 PPM in the League and 2.6 PPM overall).

For Arsenal to win, while Manchester United put in one of their better performances under OGS made things that much sweeter for me.

Arsenal 2-0 Manchester United: By the graphs 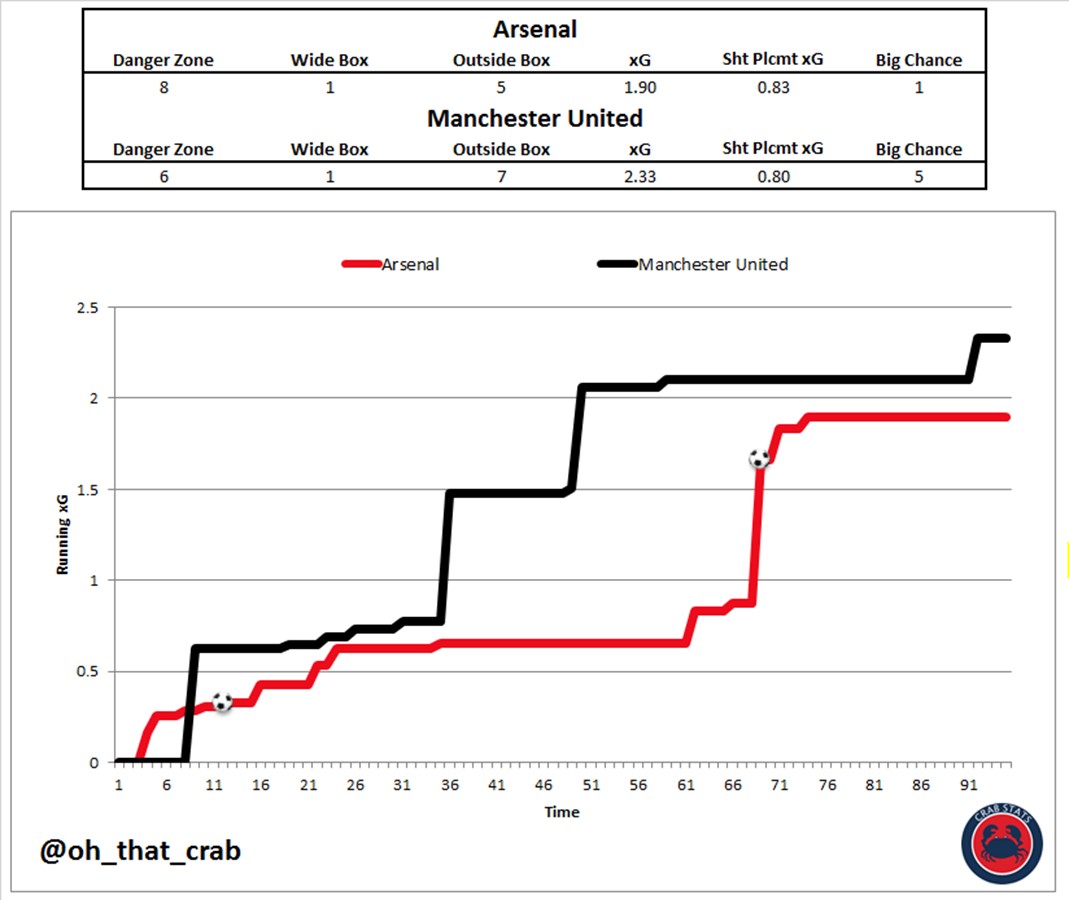 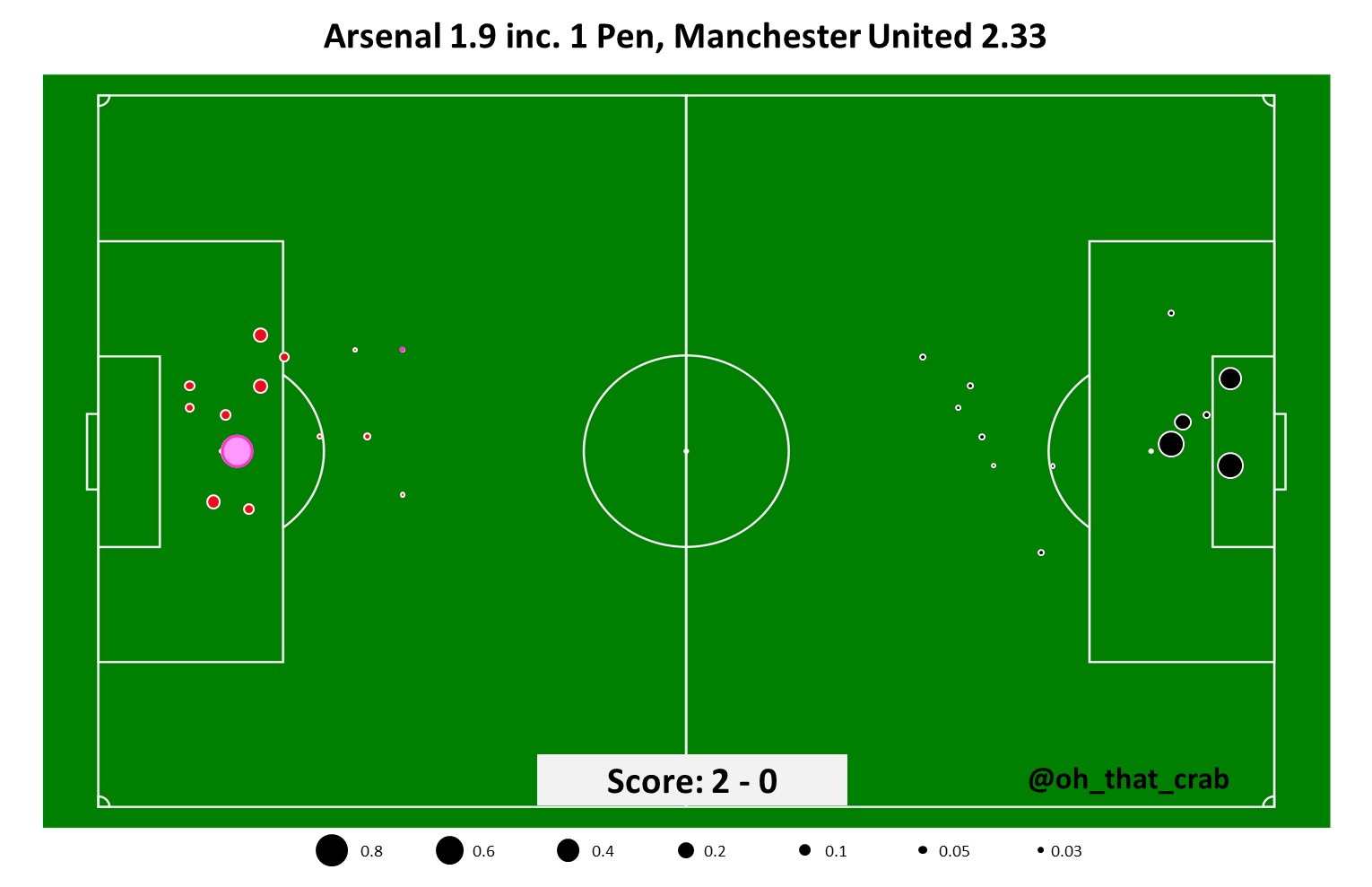 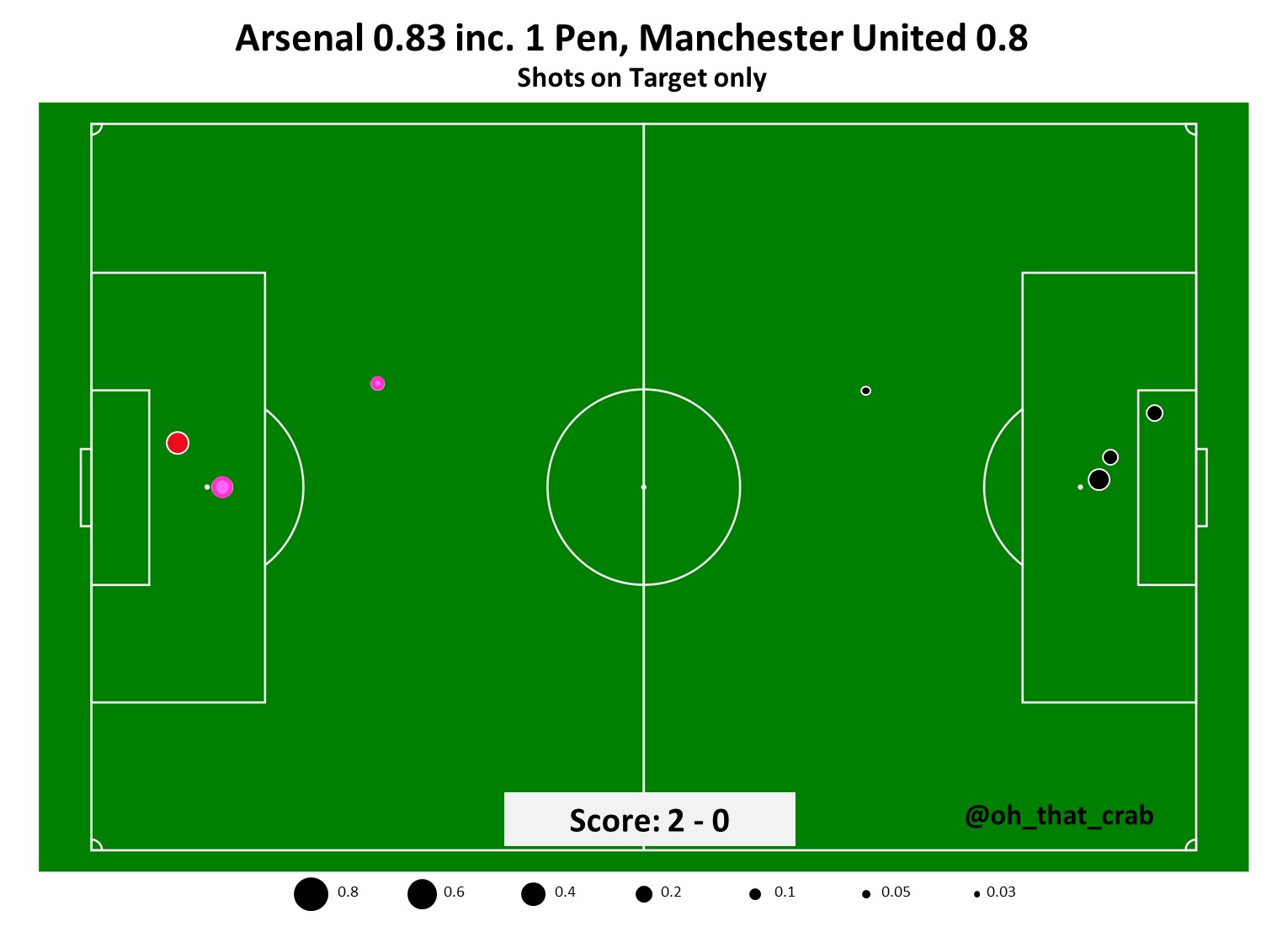 Arsenal 2-0 Manchester United: By the numbers

4 – Shots by Pierre-Emerick Aubameyang, tied for second most among all players

23 – Touches in the box for Arsenal, just 2 less than Manchester United while having nearly 70 less total touches in this match.

148 – Final third touches for Arsenal, that was 21 more than Manchester United managed.

4 – Chances created by Mesut Özil led all players, for a total of 0.36 xG Assisted

18 – Attacking third passes completed by Mesut Özil tied for the most among all players. He was tied with Paul Pogba but Özil completed 86% of his attempts and Pogba completed just 75%.

There was a lot to like in this match from Arsenal. I thought that Unai Emery did well picking the team. It was a three at the back but was far from a “defensive line up” because he was able to include both Lacazette, Aubameyang, Özil and Ramsey in the same 11.

He also seemed to play to neutralize the threat of Manchester United playing on the counter which has hurt many teams since OGS has taken over this season. Arsenal were “comfortable” (that might be going too far with the number of clear cut chances conceded but especially in the second half Arsenal looked as solid defensively as they have all season) to play without the ball and look to strike quick in numbers.

This was another match where Arsenal were comfortable playing long balls looking to be direct over short passing. Arsenal had 16% of their passes go long in this match, it made the pass completion percentages look a bit below average but it was an effective tactic.

Lastly before going further in to depth on our midfield duo, I was very encouraged that the Arsenal strikers seemed to do well to put their bad performances behind them. They were definitely not trigger shy, combining for 9 shots between them and looking to create for each other. Lacazette is also deserving of praise, he was the main target for Arsenal’s long passing and did pretty well against the Manchester United centerbacks and drawing a total of 4 fouls including a penalty where he showed impressive explosive speed to get in front of Fred who looked like he expected to be shoulder to shoulder instead of behind him when he challenged him.

2 – Times dribbles past for Ramsey/Xhaka

2 – Aerial Wins for Ramsey/Xhaka of 4 duels

Emery has been very reluctant to use Ramsey in his more traditional central midfield position this season. His only other appearance where he started in this deeper role was in the FA Cup against Blackpool. Every other time he has started as a more advanced attacking midfielder. This could be because he wants to use his non-stop ability to run to help instigate the press or it could be that he doesn’t trust his ability to not abandon his midfield partner to attack the box or a combination of factors.

Regardless of the reasons, it hasn’t happened often but against Manchester United the pairing of Ramsey and Xhaka looked incredible together. Ramsey was very disciplined in making sure that his forays forward didn’t leave Xhaka exposed. Xhaka had a partner to take the defensive load off of him allowing him to be the dictator of the Arsenal attack.

With Torreira suspended, the midfield rotation was thrown into a bit of chaos but Ramsey at least for one match was the perfect partner to bring needed balance.

0.8 – Shot Placement xG saved against Manchester United (the shot placement model takes into account not just where the shot was taken but also where the ball ended up in the frame of the goal to create an expected save/scoring rate)

6.7 – Shot Placement xG saved this season for Leno, this is tied for 4th most this season. He is behind Lukasz Fabianski (!), Alisson, David De Gea tied with Jordan Pickford

4 – Points saved with the over-performance. This is a subjective measure where I went back and looked at the scoreline and how much SPxG was saved over expected, I have Leno saving a point at Crystal Palace and vs Wolves. Costing Arsenal 2 points at Manchester United and saving 2 points at Huddersfield and against Southampton.

When Arsenal signed Leno this season, I wasn’t exactly thrilled. He came with quite a few question marks, especially about his concentration and being more error prone than you’d like from a goal keeper. But he has certainly proven me wrong for having doubts.

Leno has been very good for Arsenal, and with a shaky defense in front of him he has played very well to keep Arsenal in matches and to help secure points that are critical in the top four fight. He has been very good at making the saves that you expect from a goal keeper (one of the things that people criticized him for were mistakes on these kinds of saves) and also doing better than expected on the really hard saves.

He has also been a good fit for the type of play that Emery wants to play. He is comfortable sweeping up balls over the back line, he made an excellent play against United to save a potential one on one situation. He is comfortable with the ball at his feet and with playing out from the back. I think that his passing ability is a bit overrated but if he can continue to be an above average shot stopper, good sweeper and outlet in buildup play I can look past the occasional misplayed pass.

None of this xG bullshit

Down with this kind of thing!!! 😉
Sorry, but if you don’t like statiscal analysis of our matches, you have been reading the wrong article.
Personally I find it interesting, so Thank you Scott.

I am glad you like it. I try to do a mix of different stats that I found interesting during the match and over the course of the season. Some are simple stats some are more advanced. You can find value in lots of different things.

Many thanks, Scott. I always look forward to reading your analysis. It provides a fresh perspective, especially on things that are difficult to keep track of when watching the flow of the game as a spectator.

You are welcome to not read.

Honestly there was just the one section that mentioned xG and I think that it helps illustrate an important point about how good Leno has been this season at stopping shots. When you are evaluating a keeper it adds very important information, you can look at saves but a lot of the top keepers by saves are at the bottom of the league because they face a lo of shots. You can look at save rate but that rates all saves as equally easy to save which they certainly aren’t. All xG does is add in more context about the… Read more »

Thanks Scott keep up the good work.

I’m not a fan of xG either but there’s a whole lot of other information in the column if it’s not a stat you’re particular bothered about. Why not just read those and if you still aren’t interested maybe don’t whinge about a free article

What you say at Xhaka and Ramsey is important. They were impressive. It is sad that it has taken until now (enforced in part by Terreira’s suspension and perhaps Guendouzi’s exhaustion perhaps) but Ramsey’s energy was remarkable and he and Xhaka worked well together. Let’s hope that it is not a one-off and even with Ramsey leaving it could be on a high note.

I hope Guen was studying Ramsey performance in how to best use his running ability and getting in tackles (interesting that Xhaka didn’t make a tackle). We’ve praised Torreira for his tackling but he too can learn from Ramsey how to link that to facing up to being tackled and riding those.

Interesting that Xhaka didn.t make a tackle when i clearly remember him making a crucial tackle on Rashford as he was about to shoot!

One comment about Leno being 4th in xG saves. Remember that he started as nr.2 behind Cech so he probably has less games than the others. So he looks like a good buy.

Leno also cost us 2 points in the first Southampton fixture that ended our 22 game unbeaten run. Sorry. Had to be said.

You can’t be certain that the chance wouldn’t have been scored if he’d stood on the goal line for that one.

I like how neither the ball or man moves Leno. GKs like De Gea, seem supple but Leno seems stiff or more like a rock. Even a stamp with studs by a spud, he stayed up!

Emery also used Xhaka in the midfield in one of our last Europa league group stage games. I’m glad this puts to rest that a Xhaka/Ramsey pivot can’t work and that Ozil and Rambo can’t both be on the pitch together. It was always ridiculous. Wenger was the one instructing Ramsey to make all those late runs into the box, leaving Xhaka exposed. When Wenger told Ramsey to be more disciplined (San Siro game against Milan last season) Ramsey did a beautiful job both offensively and defensively.

The amount of times we have battered United and came away empty handed, makes Sundays scrappy victory all the more sweeter.

Scott, how come you’ve got Man U having 5 big chances, but on the graph of running xG there are only 4 jumps in their line?

I always learn something from this column. Thanks.

Leno is definitely a good addition. He will get even better and become a real leader as our back line gets dramatically younger soon.

All hail Ramsey and Kos, who give their all every game, even as their Arsenal careers wind down. I love them both.