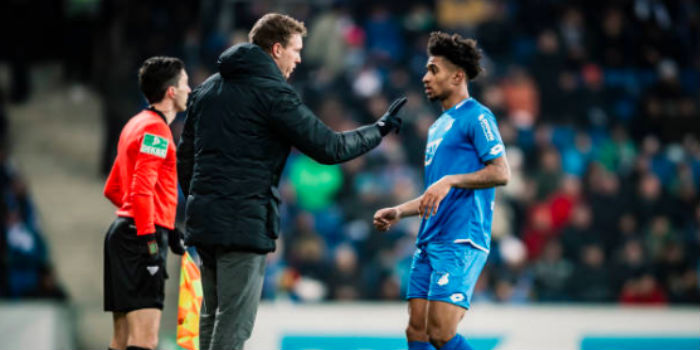 According to reports in Germany, Julian Nagelsmann dropped Reiss Nelson from his Hoffenheim squad this weekend as an ‘educational measure’.

Nelson has made 23 appearances for the Bundesliga outfit since signing on loan in the summer but has been on the periphery of things since the turn of the year.

His blistering start to life in Germany included six goals and October’s Rookie of the Month award, however, of his club’s last eight league games he’s played just 69 minutes, coming off the bench on four occasions.

We’ve not watched enough of the 19-year-old to know if he’s struggling with a mid-season dip of form or if other factors are at play. If his absence from the 2-1 win over Nurnberg was for disciplinary reasons, something Nagelsmann hints at, the underlying cause remains unclear.

What we do know, is that the coach was very unwilling to get carried away when the teenager banged in a few goals at the tail-end of last year.

In October, he said: “We must be mindful. Nelson’s scored four goals, two very important ones against Nuremberg, but he’s also had bad games.

“It’s not about being a one-hit wonder, but about delivering good performances over a long period of time. Being the best over 15 years.”

You can’t really argue with that. Here’s hoping Reiss sees Saturday’s absence as a pick-me-up heading into the season finale.

Nelson: It’s a big achievement for us

He shit bag and not fit to lead club. Embarrassing in the football and clueless fucking idiot. No more can we stand this.

No one understands me.

We understand you, but the #…Out hashtag is a bit unpopular here these days. Just that 🙂

Please do not exaggerate. If he was a problematic guy, we would have known at Arsenal. This Nagelsmann guy is overdoing things with Nelson, I would say. The fact that his form has dropped since Nagelsmann decided to always downplay his performances show the approach used isn’t the best.

I don’t think you know much about Julian Nagelsmann mate.

Yeah Reiss, we want you to be like the Spice Girls, not the Cheeky Girls.

Did he arrive at training in a Union Jack dress?

Will be great to get him back this summer. He will give us some much needed depth on the wings. And a different option from Iwobi and Mkhi all the time.

Just out of curiousity, what are you basing this on? What makes you think he is ready for the squad?

I think he’s ready to be a rotation option for Cup games, EL or CL groups games potentially. Not saying he’s our next Henry, but at 19 he needs consistent exposure to the first team. He’s our best prospect and unless he comes back and does not appear ready then I don’t think he should be loaned again. He can help us.

I would argue Smith-Rowe is a better prospect, but Nelson needs game time and a sub every other game doesn’t do enough for him, in my opinion.

His performances in Carabao, FA Cup and even U23. Nketiah got 5 minutes yesterday. That’s how it works.

But even Nketiah isn’t ready and 5 minutes here or there isn’t enough.

We have 2(rotation, injury, suspension) strikers besides him. Welbz injured. Next pick would be John-Jules upfront. If we have brought a steady striker in, who is willing to play the third fiddle than we have could loaned him out.

Are you saying you want another season with Iwobi and Miki as the main wingers ?? dear lord.
The goal is to be competitive, you know, like title challengers or close. That means we need a squad upgrade, because the current squad can barely scrape a top 4 spot.

pardon. responding to Cacho not Leemillion 🙂

Sounds like Nagelsmann is an ideal coach to lend players too

Se see this with young players all the time. They have a few hit shot games, lose a bit of form and the manager drops them to protect them from any fan moanings.

I really don’t want to sound pessimistic, but I still don’t think he’s ready for our first team. He isn’t playing enough and has been subbed on every now and again. I don’t think next season will be the one he stakes his claim. He needs to be a first team regular somewhere and consistently show form.

Agree, we need to spend some money on a proper winger and loan him out for another season for him to develop.

why pessimistic?! i think it’s kinda realistic and it’s perfectly fine if you are not 100% ready for first-team premiere league football at the age of 20.
I think since Cesc we all have set the bar bit too high in expactations how a 20 yr old has to play.

I guess more cautious than pessimistic I suppose. I want him to come good but he needs more football.

…this is exactly the education and tempering he needs from a decent manager in a high level league.

Becoming increasingly concerned that another wondeful talent may throw his eer away due to disciplinary reasons. There was a recent report re: Chris Willox also. Remember Akpom & others. What a contrast to Ramsey- leaving club to mega contravt at Juve but remains professional to the end. Reiss make the right choices. You won’t get another chance. It’s not rehearsal. Sure its tough to work for yrs to reach the top but always rember those who will never have the opportunity you have. After watching football for 40 yrs you need talent and dedication / professionlism. With great dedication and… Read more »

Too many young players go soft/lazy when they get the big money too early.

Arsenal have great young talent including:-

We should send mustafi on loan. He might get better.

No just get rid. Mustafi aint good enough plus he is a liability. I shuddered when he is on the team sheet.