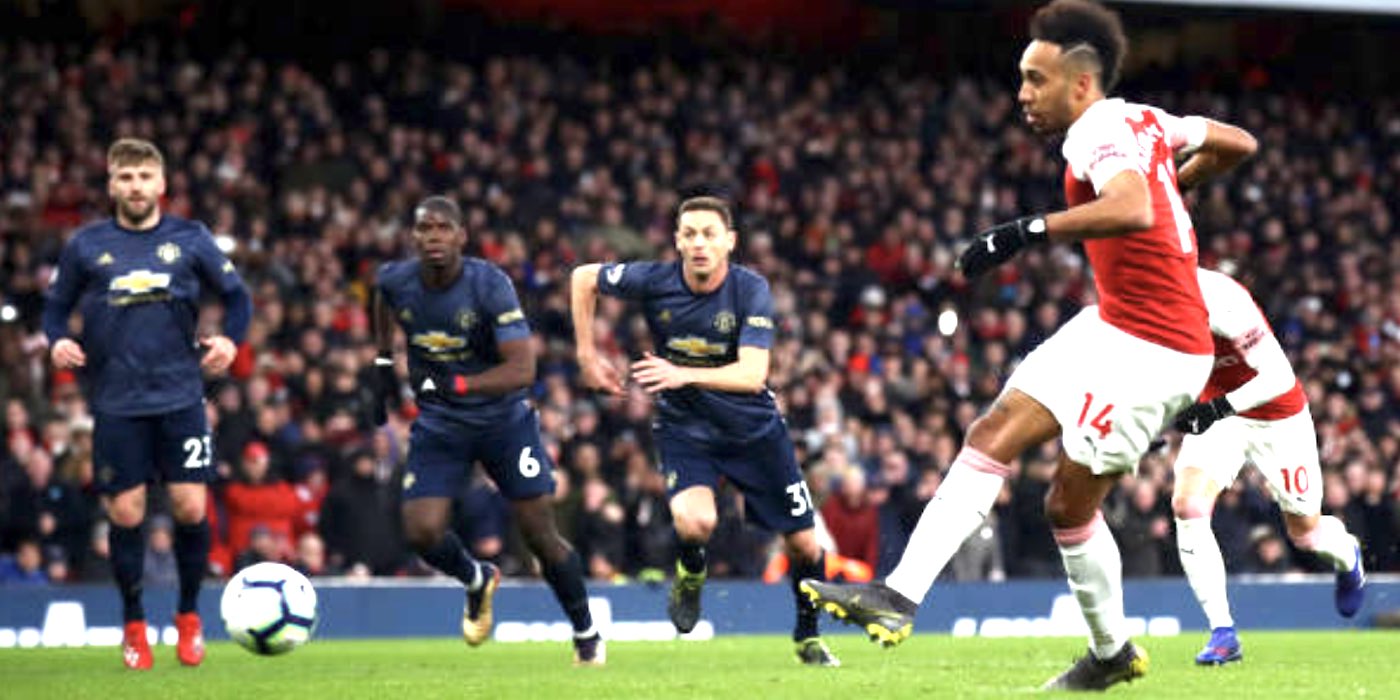 Pierre-Emerick Aubameyang’s reward for scoring in today’s the 2-0 win over Manchester United at the Emirates this afternoon was being interviewed by Jamie Redknapp.

The striker was asked to talk the former footballer and trainee pundit through scoring his penalty and his thought-process, and he revealed some insight into his technique – which is basically to wait for the keeper to move.

“I was confident, my teammates gave me a lot of confidence, as you can see Laca gave me the penalty, and that was cool from him,” said Aubameyang.

“I was really focused. I did a mistake against Tottenham, I looked down at the last moment so I didn’t watch Lloris, and I missed it. Today I watched de Gea, and being focused you score a penalty.

“We have to practice this all the time, today it went in.”

As for whether it crossed his mind not to take it, he continued, “No, I knew it would be tough but as I said before I was really confident.

“What I want to say is that the spirit of the team is really great, and that’s why I’m feeling good today.

“I think we have everything in our hands, we know it will be tough to finish in the top four, but we’re confident, we did well this week and it was important to win this game today and we had chances.

“We are hungry, we want to come back into the Champions League, and we’re all focused on doing that.”

Read the report and see the goals here

Xhaka went home and emptied out Pogba the 90 million pile of shit from his pocket. Trashford is a B-tec Sanogo lol. Love owning Man Ushited they are so average and yet they have the 2nd most expensive squad LOL

I like the sentiment, but the execution is so painful.

Please can we let’s just have laca take them penalties! Auba give me chills!

Because Auba scored all PKs but one or two?

Perhaps Lacazette should be taking them

Balls of steel. Love Laca giving it to him.

Massive balls to take the penalty as well as kick it in the exact spot as last weekend.

That being said, I would feel more confident if we had tidier PK taker in our squad. With VAR coming, there might be more penalties next year and so they become huge element of the game.

See Milivojevic at CP (not saying we should sign him, just pointing a proper PK taker).

Yeah, great technique as well. How he drags his foot before striking. Class.

Lacazette is a crack penalty taker, better even than Cazorla and Arteta were. Aubameyang only took it because he missed last time.

Glad he scored it and presumably laca gave him the opportunity but he just doesn’t fill me with confidence when he takes them. He shouldn’t be first choice

Last year when Laca came back from injury, Auba let him take the PK

Must admit i almost sh*t my pants when I saw him taking the penalty…. but what a relief at the end. Super proud of this team, not so bad against the top team in the 2nd part of the season. As he said: it’s within our hands now. 8 to go, we can do it!! COYG!!

I didn’t watch it i storm tho the toilet and was begging to hear a cheer from our fans and thabk god i did ?

i thought it was just me

exactly the place where I went!

Just closed my eyes – first time this woodoo – and asked my sons to watch that thing. Of course I closed my eyes before but it never ended with a 2 nill to the Arsenal!!!!

Great performance. We rode our luck at times but we were the better team throughout. Finally a win against United and it was well deserved. It’s on!

Good to see Auba learned from last weekend and went for the corner. ?

Good on him for getting straight back on the horse. Will do him a lot of good to have scored that pen. Laca was clearly calling for him to take it. Good work!

And now just one point behind the greatest team that’s has ever been. Hilarious.

I am glad he scored. Hope this boosts his confidence for Thursday. We will miss Laca, but if we put out our strongest team, give 200%, and have some luck, we should beat Rennes on Thursday.

For those that claimed the penalty was soft, I remember the numerous times that potato-headed cunt Rooney dived to win penalties against us.

So anyone that doesn’t like it can get fucked.

Hahahaha. I can imagine that!

Great kick, Auba. Keep it up.