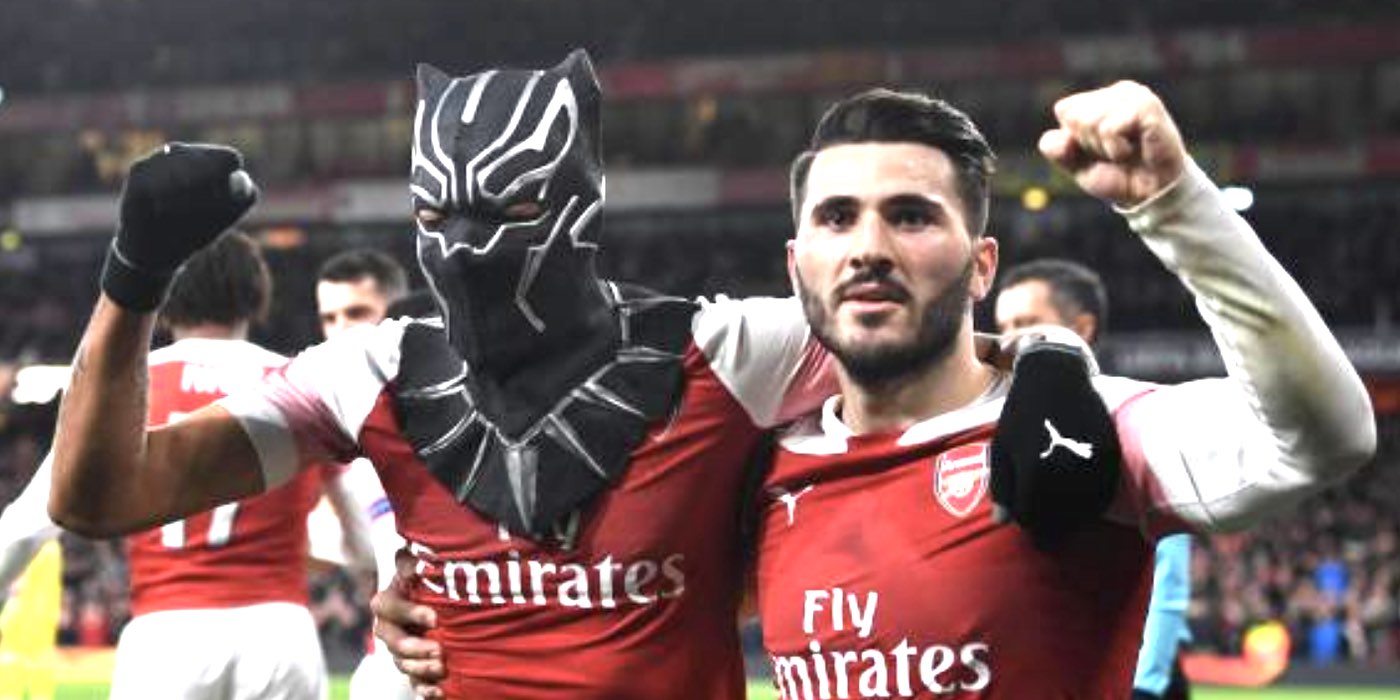 Goalscorers Ainsley Maitland-Niles and Pierre-Emerick Aubameyang spoke to BT Sport after the 3-0 win over Rennes in the Europa League this evening. Here’s what they had to say.

Read the report and watch the goals here.

BT: Strange that at 3-0 it was still a bit nervous.

Auba: Yeah, I think the miss … ok I missed two chances to close the game, but the most important thing is that we won tonight. Everybody’s happy and proud.

BT: A great goal and a great moment

AMN: Yeah, it was fantastic you know. He set me up, it’s a great feeling to go 2-0 up early in the game. So yeah, fantastic.

BT: What’s the story with the mask after the second goal?

Auba: I did a mask that would represent me, so it’s the Black Panther, and in Africa, and ok in Gabon we call the national team the panther of Gabon, it represents me … so that’s it.

I’m really happy tonight for him (Maitland-Niles), because Arsenal have to be proud of young players like this who come from the youth team, they come here and he’s playing so well. So we’re all happy.

BT: It’s been an important few weeks, into top four and quarter-finals of the Europa League.

AMN: Yeah, i think we’re showing that we can do it, that we’re good enough as a team and we have great spirit. We’re all fighting for each other on the pitch.

BT: Rennes got a bit narky.

Auba: Yeah, they were a bit nervous, angry as well, but that’s football!

Am I the only one who absolutely hated the Black Panther film?
A woeful plot packed with bad acting and generic racial clichés, I barely made it to the end.

I certainly wouldn’t watch it, or any other dross film, over the arse!

Depends whose arse it was IMO

No one cares. Shaddap.

Haha Auba brillant!!! We Lucky To have you

Great week for AMN! Regardless of formation, he should be picked over Liechsteiner any day

We are not out of it yet
Reply to  Merteslacker

Lets not get so negative Merteslagger, we might need Liechtensteiner (please learn to spell or at least check the spelling of his name) and he did play well in his last game. I am not into this criticism towards our squad players. Mustafi, Elneny etc are vital to this run in. Lets support the whole squad as each one of them have one great quality and that is in the red and white of their tops. So CYG (all the squad) another step towards the draw for 2019-20 champions league.

djourou's nutmeg
Reply to  We are not out of it yet

martin
Reply to  We are not out of it yet

T’was a very odd comment ,to say the least (did I misspell “Twas”? Is it even a word? I guess I’m soon to be told).

We are not out of it yet spelt Lichtsteiner wrong, while being a Grammar Nazi

djourou’s nutmeg spelt Liechtensteiner, Liechtenstein, and Lichtsteiner correctly, but failed the grammar test because he didn’t capitalise the first letter of each name

martin spelt it all correctly, but like djourou’s nutmeg, he doesn’t capitalise his own name, which is right dodgy grammar

I can spell Tot’nam Hotshite correctly, but I fail badly when it comes to full stops, or periods, as some people like to call them. Haha, got that last one right

Two goals and an assist for Auba will do him a world of good. Can’t believe I’m saying that about our top goalscorer but there you go. He could have had more but what is important is that he contributed so much today. That sets things up very nicely. There are some good teams still left in the Europa league now so I expect the next game to be trickier than this one. But only positives all round tonight.

Would not have been happy with Auba’s misses if Rennes had scored late goal. He really needs to be sticking those chances away.

Do you notice that Kolasinac doesn’t need a mask

Is that you mum? Finally over big Dave Seaman!

He is a human Panther!!

He’s a Marcelo and Alves level creative full back. So efficient so effective.. also a bada$$ beast, someone you’ll happily take to a fight..

Waste of a yellow card.

I’m sure we can appeal, we are on a good run in that department 😉

Not sure we can appeal yellows. A bullshit rule, almost as stupid as booking someone for putting on a mask. It didn’t incite the crowd and there is no guidelines to warn a player of its illegality, so it is really not on to give a booking for that. No idea what they would have done if he got a second! :O

Why was he given a card? A bit of fun

Guess because it took some time more than the mask itself

Yeah, he is our Black Panther.

From row 25 he looked like one of the band Kiss. I was not impressed.

I’m not usually a huge fan of props and rehearsed celebrations. I do like the fact that he paid homage to the homeland of his father (shit, his father’s Wikipedia page is a bit unclear on that subject). I think sometimes supporters think that footballers’ confidence is more fickle than it really is. PEA misses chances a lot and scores a lot of goals. Tonight he was strong and confident. He fluffed a couple of chances. The drag dribble, step-over sequence on the left-hand side in the build up to AMN’s goal was brilliant work. The left-footed, perfectly flighted ball… Read more »

Aubameyang has got swag… No point hating on a bruva