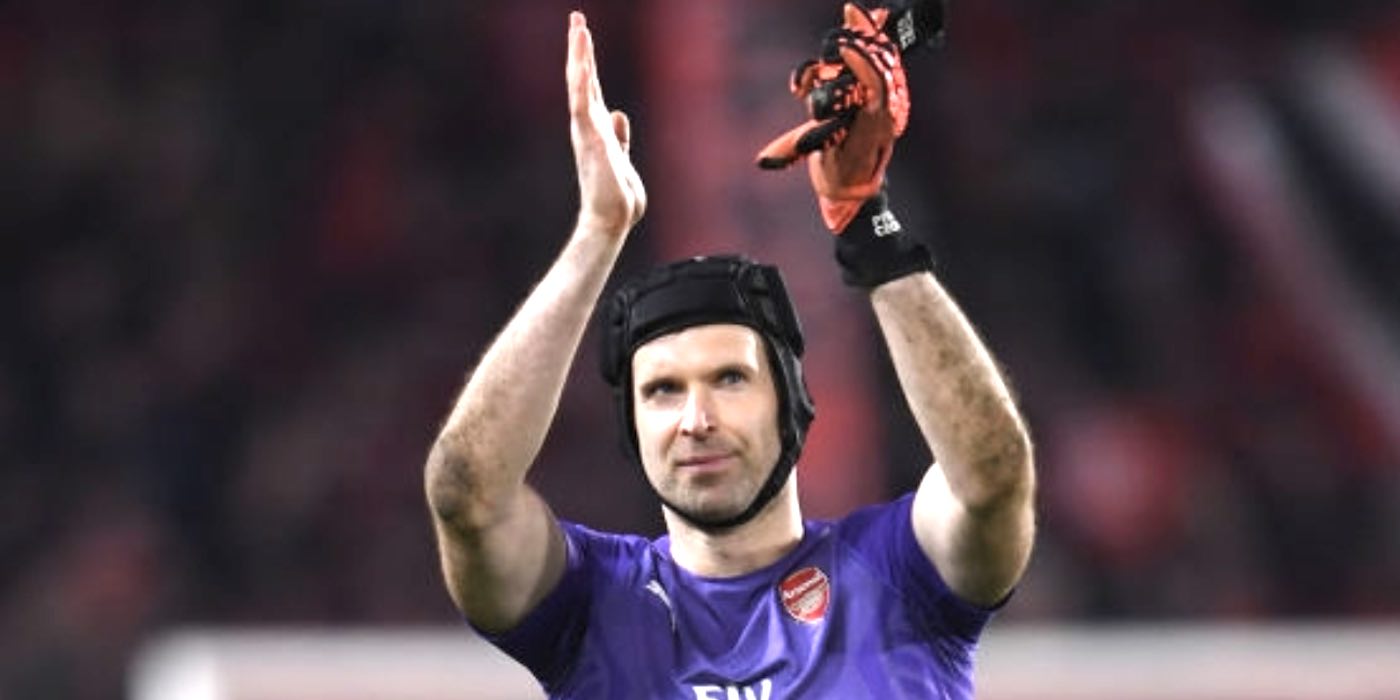 Petr Cech returned to his former club last night, and probably had a much busier night than he would have wanted.

Although he conceded three times, the veteran had to make a succession of saves after the home side took full advantage of the fact that Arsenal were reduced to ten men five minutes before half-time.

All of their goals in the 3-1 win came after the sending off, and the 36 year old was particularly unhappy about the late concession of a third which makes next week’s second leg even more difficult.

“I think the biggest disappointment is the third goal,” he said, “because at 2-1, you go home and you know that there’s a result where you’ve scored away at home and you can overcome it.

“The turning point was the red card because they managed to score from the resulting free-kick.

“When we went down to 10 men in the first half, it became a lot more difficult. We were unlucky with the second goal because it was an own goal from a deflection, but I thought we were still in the game.”

However, with a home game to come at the Emirates, Cech remains confident that we can do better and qualify for the quarter-finals. Asked if it’s a deficit we can overcome, he said, “Of course. At home we can win. We created some chances today as well so we have to be positive.

“We’ve done it in the past where we’ve been 2-0 down and have overcome the deficit. One positive is that we can give it a go in the week to overcome it.”

For more on the Rennes game, check out the brand new Arsecast

And its Arrrrrrsenal. Arrrrrrsenal FC. We’re by far the most combustible team. The world has ever seen.

Not heard anyone mention the linesman flagging offside for Aubamayang when he was clear one on one against the goalkeeper just before the sending off. He was clearly onside and a goal then kills the tie. VAR not involved until the final which I very much doubt we’ll in but it’s not impossible. Such a disappointing evening.

Yes. I can’t believe this hasn’t been mentioned. It was only replayed once & very quickly. Guess the French TV knew it was a good goal.

Sorry to go completely off-topic, but if I may be allowed to offer a suggestion/request Blogs: can you just have Musa Okwonga on the pod any time we’re playing Man U in future please? I like listening to him, and would rather not have to listen to that smug prick you had on today again.

I still can’t believe how the bbc’s match report says Sokratis “foolishly tugged at Sarr’s shirt to earn his second yellow card of the evening”! I have watched the replay a hundred times and at no point could I see Sokratis tugging his shirt! And to think they reported it with the word “foolishly”. I give up on the British media

Let’s face it, guys, the referee wanted to please the crowd and was the accomplice of the diving and cheating Rennes players! Never seen so much comedy from a football team since Barca and Bayern! I’m French and ashamed of the show this team offered!

Most players in this squad are a big disappointment.
They called it a rebuilding phase, then went and kept the same culprits who did the demolishing in the first place.

Having almost beat Bayern at home I’m sure we can beat Rennes and the laughing Ben Arfa. I’m just worried about tiredness. If we beat United then I think we’ll beat Rennes, otherwise we’re screwed and we have to win all our remaining league games.

Did Sarr pass his audition?….. We’re you guys impressed by him?

We don’t need a diving unmanly bastard as one of our player.

not too happy about the first two either, Petr

We need to win by two clear goals without conceding.

But we have not made it easy again.

We are our own worse enemies.

should have a managers rating to go with the players, i’d of given Count Emri a 2, leaving on a £35000 a week show pony to do the work of a err.. workhorse while we are under pressure then taking off our only outlets to keep the ball in their half was horseshit.. jury still out on this fella..