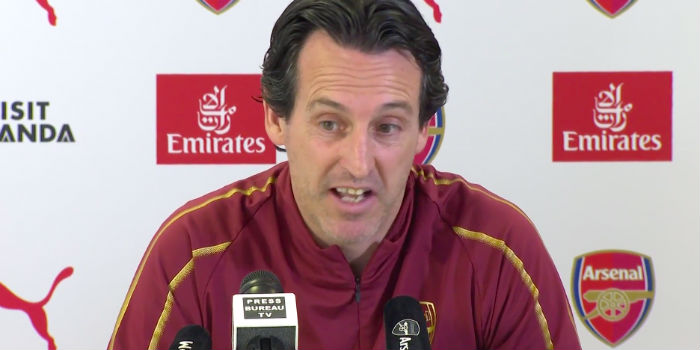 Unai Emery says he’s urged his players to keep moving forward as they look to maintain the momentum that has squeezed them into the Premier League top four with eight matches remaining.

The Gunners jet off to Dubai for a warm-weather training camp and low key friendly during the international break with the Spaniard eager to maintain focus within the camp ahead of a hectic schedule that includes eight games in April.

Ahead of Monday’s showdown with Newcastle United at the Emirates, the Spaniard explained how his players have coped with their break from competitive action.

“When we are taking, also, the international break, we can rest other players.

“In this international break, we decided to go away to train for four days and play a match in Dubai. But it’s the same idea, the same spirit.

“Don’t stop, keep moving forward to train with the players, with the young players with us in Dubai and today we meet, everybody, to focus on Monday.

“But I think for the players and for me, we have this habit to play a lot of matches in one week. To keep moving forward in the training session and waiting for the competition to come back.”

After nearly nine months at the Emirates, Emery has had plenty of time to tinker with his squad combinations and tactics. By and large, he’s pleased with his work so far, although the experimentation continues.

“We are playing different systems with different players and we are taking a big performance with them. I have a lot of confidence in us and our players, but I know Monday’s game is giving us a big challenge against them.

“I know we are strong at home but we need to continue working like we are doing and also keep moving forward with a big ambition and big atmosphere in our stadium.

“I want to create each match with this atmosphere to show them our best performance with our system and tactical plan. Every match is a big challenge for us.”

We’ve also won nine Premier League games on the bounce at home and could equal our record of ten, achieved in 1997-18, with a victory against the Magpies.

Of course he’s right. We’ve good home recently, but we’ve lacked consistency away and we’ll need both to keep ahead of Utd and Chelsea who are both bound to pull out all the stops out now. A win against Newcastle is important to get our EPL run-in off to a positive start and, perhaps, an early opportunity to overtake the Spuds should they slip up against Liverpool.

Klopp was quoted today as saying he expects the strongest Sp*rs side.
I’d have thought that’s very unlikely as they’re all either well past it or dead.

There is something to be said about getting used to a routine of games packed in tight. It could work both ways of course. But sometimes, a long rest period can also be detrimental. What’s important is we need stable selection from here in. That means at the back if back 3 (which suits our wide wingbacks- Kolasinac and AMN), then a selection of Mustafi- Sokratis-Koscielny with Monreal thrown in the mix. I would not risk Mavropanos. What we know and concurrent understanding is key. Putting an unknown in is always dangerous. In the engine room, Granit is key with… Read more »