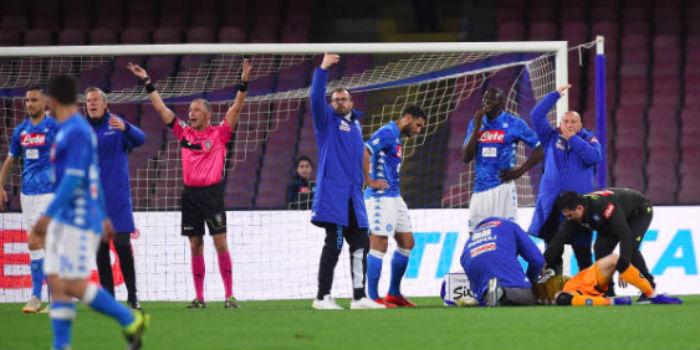 David Ospina will stay in hospital for 24 hours after he collapsed on the pitch after suffering a head injury during Napoli’s 4-2 win over Udinese.

The Colombia international, on loan at the San Paolo for the season, collided with Udinese’s Ignacio Pussetto early in the game but continued playing for 41 minutes with a heavily bandaged head. Just before half time, he collapsed and was subsequently stretchered off.

Coach Carlo Ancelotti has allayed fears of any lasting damage saying, “Fortunately it’s nothing serious, he’s conscious, they did a CAT scan that is negative, he’ll remain under observation tonight.”

Napoli have since released a statement confirming Ospina suffered “a hypotensive crisis resulting from a head injury” – that sounds quite scary but is basically a sudden fall in blood pressure which can cause dizziness.

We wish Dave a swift recovery, there’s a chance we could face him next month now that we’ve drawn Napoli in the Europa League.

Why leave him on with a head injury?

I don’t think so, dave goes down every time he makes a save.
If he said to the medical team he could go on what more could ancelotti do?
Quite an accurate metaphor.

But surely a heavily bandaged head would indicate that there has been some damage done? So it’s a bit unfair to say about “the boy who cried wolf”.

It’s not up to the player to decide if he should play on or not. Not with a head injury. That’s why clubs have medical teams.

Decisions like this could be devastating to a players career. Let’s just hope Ospina will come back.

They didn’t want to use of of their subs too early.

Keeper subs should be separate from outfield subs, you should always be able to do a keeper for keeper sub without affecting the outfield subs.

Obviously if he gets sent off that is different.

I think this time he’s taken it a bit too far. ?
No, seriously: Get well soon, Dave.

Proof that a lack of neck doesn’t improve blood flow to the brain, I guess. In all seriousness, get well soon, Dave.

They did a CAT scan and didn’t find anything? ?

A CAT scan can be negative despite damage and injury. So he has to be kept under observation.

Good thing too. Nothing like a cat infestation to ruin a player’s career.

I hope it’s not too serious. He’s a decent bloke, Ospina. I’m not sure all the jokes (while admittedly funny) are really appropriate.

Why did they have to scan his cat?

Thank God you are alright, Bro.