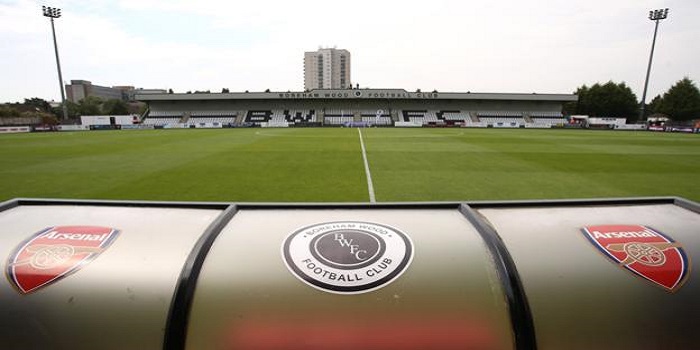 Arsenal will contribute £100,000 for a renovated North Stand and refurbished facilities for players at Boreham Wood’s Meadow Park ground. Arsenal Women and youth teams currently have a ground share arrangement with the National League club and the players will benefit from a modernised home dressing room, as well as kit rooms, physio rooms and showers.

Arsenal extended their deal with Boreham Wood for another ten years back in 2017 and fans will also reap the rewards with a renovated North Stand behind one of the goals, which will now have a roof. Boreham Wood revealed on Sunday that they have finally secured the funding for the project from various sources, confirming that Arsenal have contributed £50,000 for the new stand and £50,000 for a new dressing room.

Wood chairman Danny Hunter told Borehamwoodfootballclub.co.uk, “Over the last five or six years our long-term partnership with Arsenal has also blossomed further and has genuinely gone to another level. Hence why I agreed to and we signed a 10-year contract extension just 18 months ago.

“That contract has I feel given me the confidence to push on with this million-pound facility project, and I’m now confident that our football club, our town, our community and our charitable trust programme will benefit everyone enormously going forward. Arsenal have agreed to contribute £50k toward the stand and £50k toward the changing room project.”

Good to see us helping out. We pay Mustafi after all…

@Parlour’s Pay Packet, you sure are concerned with “Pay”, clearly.

Sadly it’s a nightmare to get back into the league once you fall out of it due to too many small time abramovices that financially dope their clubs beyond sustainable levels, like Salford, Crawley etc

I hope they didn’t put a gun to Kroenke’s head?

A P
Reply to  Teryima Adi

You mean the gun they stuck up your ass?

Should we not ask for the name of Elstree and Borehamwood Station be renamed Arsenal 2? Or would that be a totally classless thing to do?