In August, Stan Kroenke agreed a £600 million deal with Alisher Usmanov to relieve him of his significant shareholding in Arsenal. The move took the American beyond the 90 per cent ownership threshold and obliged him to buy the rest.

On 25 September, whether those with small shareholdings accepted the original offer or not, Kroenke completed the compulsory acquisition and became the sole owner of Arsenal.

Private Eye now claim that some of the small shareholders – those who chose not to accept Kroenke’s offer as a means of slowing the inevitable handover – have still not received the cash owed to them. It’s not an insignificant sum either, approximately £50 million in total.

From what we can tell, the hold up isn’t being caused by Kroenke – he appears to have paid what is owed to Link Asset Services, the share registrar. It’s the middlemen causing the headache, seemingly as a result of confusion as to what happens with the actual share certificates. 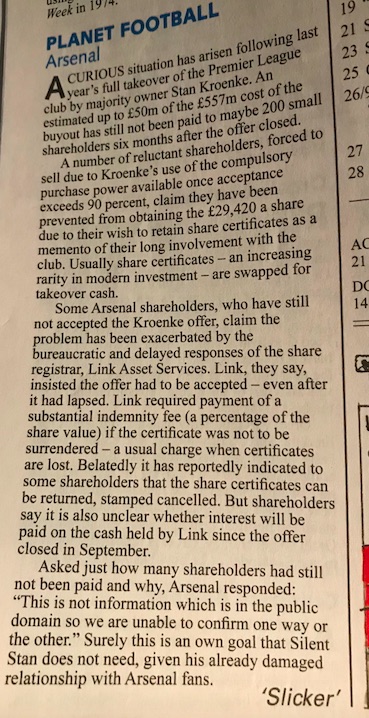 Given the shares are worth £29,420 a pop, you can understand the frustration on the part of the Arsenal fans eager to receive what’s owed to them. Here’s hoping there’s a quick resolution.

if only we had kept Gnabry AND Scezeney , that would be an 100mil on the books .
I always thought Gazidis was not the sort to run the club, first chance and he runs off

Much of the Wenger/Gazidis era was a slow motion car crash for the club on and off the pitch. It will take several years to re-build and Emery and the new backroom team need to be given a fair chance. An additional problem is the drastic cost-cutting that is underway since Kroenke gained full. The urgent need to cut the overblown wages bill is a major element so hopefully, talented youngsters won’t end up being farmed out, forgotten, then sold for peanuts. We’ll see.

hind sight is 20/20… there was no squabbling over the ‘steering’ wheel that makes their entire tenures describable as a car crash. There were ups and downs, good times, and bad times. A roller coaster that somehow got smoothly taken over. If you’re still unhappy as an Arsenal fan, that’s somehow actually, completely, true.

What’s that got to do with the article?

Here I thought Kroenke was getting up to no good but in fact, it’s the middle-man causing the issue :/

Still not a fan of Stan even if he isn’t the one at fault in this situation.

I still feel it’s Stan’s fault for buying all of the shares!

Sucks for the majority, but if it’s keeping money out of piers Morgan’s pocket that’s a slight silver lining

Well when you put it like that .
I’d like to make a toast for bureaucracy (I’m also pretending that Piers is in dire need of the money).

Link were formerly owned by “Crapita” so no surprise there…

For the love of God wake me up when March ends! I cannot take a minute more of this interlull. ????

Just remember, when April comes it really is April. Nobody’s playing an April fools prank on you.

only fool’s watch out for April Fool’s. The rest of us just enjoy getting fooled.

After February, its March

Would anyone be surprised, if it came to light that KSE owned Link Asset Services?
Kroenke is the worst, since he took a controlling majority in 2011, he’s sucked the soul right out of the club, he’s got absolutely zero ambition.

Oh no, he has plenty of ambition.

Not being funny, but if I couldn’t collect £30K because I was holding onto a sentimental share certificate. I’d simply photocopy it.

But then, maybe these people are (bless em) able to have £30ks worth of sentiment.

I think perhaps the original certificate quite some time from now might be quite valuable as memorabilia or something.

Is it over yet? The Interlull