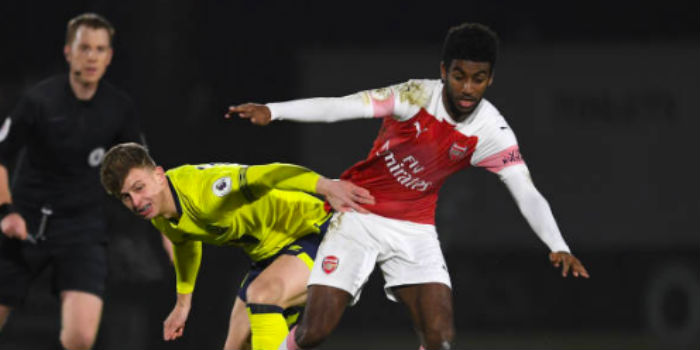 Gedion Zelalem’s time as an Arsenal player could be coming to an end with the player in negotiations with MLS outfit Sporting Kansas City, according to Football.London.

The midfielder, a US passport holder born in Berlin to Ethiopian parents, is out of contract at the Emirates in the summer but could move Stateside any time before their window shuts on 7th May.

Like many before him, Zelalem’s first team prospects as a Gunner have been hampered by a serious injury.

Recruited by the Arsenal Academy in 2013 after being scouted by Danny Karbassiyoon at the Dallas Cup youth tournament, Zelalem’s creativity quickly caught Arsene Wenger’s eye.

Still only 16, he was included in the pre-season tour of Asia ahead of the 2013/14 season where his passing earned comparisons with Cesc Fabregas. “It won’t be long before he’s ready,” remarked an impressed Jack Wilshere. Debuts in the FA Cup and Champions League followed in 2014, as did a contract extension.

In 2015/16 Zelalem was sent north of the border to gain more experience. He enjoyed a successful loan spell in the Scottish second tier with Rangers, helping the Ibrox outfit earn promotion to the SPL and win the Scottish League Cup. Just for good measure, he also netted a penalty in a Scottish Cup semi-final shootout with Celtic.

Could he force his way into the first team on his return to London? Seemingly not. After six months in which he played only youth team football, he signed another contract before joining Dutch side VVV-Venlo on the advice of Andries Jonker. He made nine appearances as they won promotion to the Eredivisie.

Since then, it’s been downhill for Gedion. In May 2017, he suffered knee ligament damage playing for the United States at the Under-20 World Cup in South Korea and a subsequent setback in his recovery kept him sidelined through until last November. He’s made a few appearances for Freddie Ljungberg’s under-23s this season but it’s become increasingly clear that for his career to progress he’ll have to fly the nest.

If there’s a positive, it’s that Zelalem is still only 22 years old. Hopefully, regular football will see his confidence return and his talent come to the fore.

Sad. I had such high hopes for him. The last injury really did him in. His technical ability is at a high level but I heard Wenger felt he wasn’t ready enough physically.
The last injury he got ruined everything. Wish him all the best.

It’s funny to think that a player who made his debut at 16 didn’t get enough opportunities, but I think he suffered from the same fate as Gnabry at Arsenal. Highly rated, capable of playing top level football while still young and sent to the wrong teams or leagues on loan. He is an example of our/Arsene’s reluctance to change, and yet we only know him because of our/Arsene’s belief in young players. I loved watching him play and it hurts to see that his future will not be at the club. Good luck to him.

What’s Arséne got to do with his injuries?

His lean nutrition system I would say but that is a brainstorming result.

I watched Zelalem play for the US youth a couple of times and noticed he doesn’t work hard. Iwobi earned his chance with the senior not because his talent was shiny. Wenger said Iwobi was playing like a mature player. I said two months ago Zelalem may have his in MLS and most did not agree.

MLS is a poor choice.

Zelalem should be trying to get into Germany or Holland.

I feel he lacks motivation.

2 goals and fast then you’re compared to Henry.

That’s so funny but true

I’m just bummed he’s going to SKC. Would love to see him in Dallas. I think he’s going to be very good in MLS. If he succeeds there, he’ll get another European opportunity.

He’s got plenty of talent, but isn’t powerful enough for central midfield, or fast enough for wide midfield. Well not at the top level anyway.

He might have proved useful but his injury came at exactly the wrong time and his position in the club has been taken by others.

One of those that may mature late, but might not.

Good luck in the MLS he could fit in there.

Wish him all the best and should he prove to become a top class player like his potential suggests I wouldn’t be averse to seeing him back in the red and white. Has always seemed a pretty down to earth kid.

Was a mistake opting to represent the US. Also a mistake to go to MLS.

So many young hopefuls look great but then never deliver.

Meanwhile 8f we are looking at young players, Ajax has been inspirational following years if neglect in the Netherlands.

Some very interesting forwards including Ziyech, Neres plus lozano at PSV.