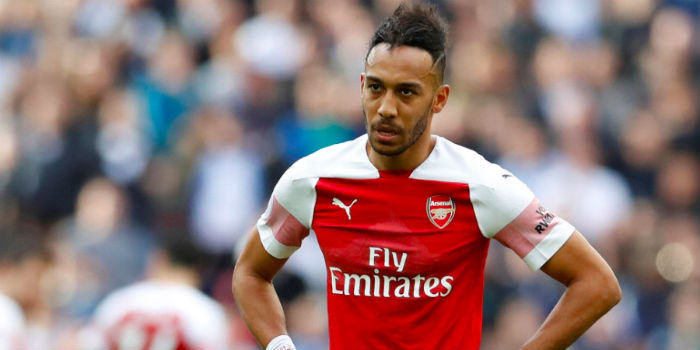 Arsenal have revealed that Pierre-Emerick Aubameyang is a doubt for Sunday’s trip to Leicester due to an ongoing sinus issue.

The striker underwent a ‘minor’ procedure earlier this week that forced him to miss the defeat at Wolves and he’s still being assessed by the medical team.

Aaron Ramsey and Denis Suarez have both been ruled out with hamstring and groin problems respectively.

It wouldn’t come as a surprise if the Welshman is ruled out of next week’s games with Valencia and Brighton as well. A more realistic target is the away game at the Mestalla on 9 May.

We’ve no idea what is going on with Suarez. Frankly, at this point, we’re not sure we care.

Elsewhere, the long-term absentees, Hector Bellerin, Danny Welbeck and Rob Holding are all continuing their rehabilitation.

Arteta: Aubameyang out of hospital after malaria diagnosis

I know he’s contriubuted a lot this season, but the first thing I think of when I see this guy’s face is the penalty miss versus Spurs.

What about the penalty he scored against united in the match directly after that?

We have 3 reliable goalscorer, now 2 of them are gone. I hope Lacazette gonna have a good day, otherwise i can’t see any positives for us.

Depends of he gets the service. Not holding my breath…

Rambo is a cheat, he keeps himself in reserve for Juve

What the fuck are you talking about mate?

I’m not a fan of Ramsey but your comment is trujly ridiculous.

You obviously haven’t been watching any of the games his been playing in!

I would say that surgery was strategically timed to have him fit for the semi final ?

I’ll be watching the game with my eyes closed and my fingers crossed. I might say a prayer or two just to give us an edge.

We’re beyond prayer now. The top four quest is finished. May as well give up now and save yourself the effort.

Ex-Priest beyond prayers, makes sense to me.

I’d add ear plugs to that combo as well. Might even be positive to not have to listen to commentators and their gleeful hopes that we’ll fuck up…

this right here! curious, how do you guys do it? do you watch on mute? i love the noise of a stadium while watching a match. creates that extra tension for me. but the cringy vomit-inducing commentary that is always biased against us makes my ears bleed

I watched the Wolves game on a feed and Chris Sutton’s hand must have been just a blur in his lap such was his excitement at how crap we were.

I am gonna try watching it on mute, with some nice fans singing on YouTube in the background. I also like finding a stream with Spanish commentary 🙂

When possible we need Auba and Laca starting every game, they have been the difference all season, have made the club fortunate enough to be in contention for top 4. We don’t have any midfield attacking flair players that can support them, whereas all the top 6 teams do have these type players, i.e. Sterling, Silva, Sane / Salah, Mane / Moura, Lamela, Son / Hazard, Hudson-Odoi, Willian, Pedro / Martial, Sanchez (we know he can!), Lingard. We know the issues we have in defense, but to be in the position we are today without any midfield attacking flair that… Read more »

I thumbed you down because you put Lingard on your list

I think we have enough to beat Leicester.
Whatever this mental block is away from home won’t get resolved in a hurry. I’m scared!

I do question the wisdom of Auba having what is almost certainly an elective procedure at the sharp end of the season which has effectively ruled him out of 2 must win matches. Just hope he recovers in time for EL.

Flu season? What sinus issue? Hope Auba will play. Would be great to have 2 up top putting pressure early and high up against Leicester. We need to sow doubt in them early, cause a bit of chaos for them at the back and criticially prevent chaos for us nearer our backline. If Auba is unavailable, we may have to either revert to one up top again with Iwobi and (either of ) Ozil or Mhki supporting or potentially (a risk) try Nketiah in tandem with Laca. The youngster I thought did OK for me. At least he was trying… Read more »