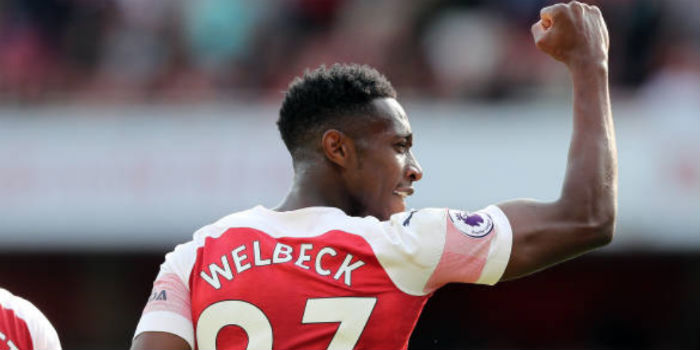 Danny Welbeck’s contract expires at the end of June, and bar any late and unexpected offer from Arsenal, the striker will be leaving the club for free this summer.

Having joined from Manchester United for £16m in 2014, the England international has impressed at times, but has also endured three serious injuries during his spell in North London.

An initial diagnosis of bone bruising didn’t see that serious at first, but eventually required surgery and saw him miss 9 months of football.

Shortly after coming back from that he suffered a torn meniscus away to Man City which saw him sidelined for another 9 months, and last November he broke ankle in a Europa League clash with Sporting which has seen him miss the remainder of this campaign with a return before the end of the season very unlikely despite a recent return to contact training.

With Pierre-Emerick Aubameyang and Alexandre Lacazette ahead of him in the striking roles, you can understand why he might – at 28 – decide to go somewhere with a better chance of regular first team football, and reports suggest that he’s a target for Newcastle United.

There were suggestions that the Magpies were considering a move for him during the last transfer window when he would have commanded a fee, and if their interest is rekindled it could be a decent destination for him and a solid addition to Rafa Benitez’s squad.

Welbeck spent a season on loan at North-East rivals Sunderland when still a United player, scoring six goals in 29 appearances in the 2010-11 campaign.

Another player I’ll be sad to see leave, but I don’t think we’ll recognize much about Arsenal in another year or two.

That can only be a good thing really. We all love Danny but sentiment needs to be put to one side at Arsenal. Need to get rid of the niceness

Sad to see him leave as well. He may not possess the quality some arsenal strikers did in the past but he was always dedicated and gave 100% on and off the pitch. He seems to be liked by everyone at arsenal and his presence in the dressing room will certainly be missed. Genuinely seems like a nice and funny guy.

It’s a shame all the injuries he’s had but I hope he can get a good couple of years of injury free football – at arsenal or elsewhere.

Not Iwobi. He may not be the finished product yet, but is by far our best winger, is one of our own and still only 23 years old. He’s made a lot of progress this season and I’m excited to see him grow at our club for many years to come hopefully.

Don’t want see him leave probably end up like gnabry

We would only have about 3 players left if we were to ship all the duds.

I know, most commentators talk out of their arse.

We will need, Cback, Rwing, Midfield, potentially another keeper (Depending on Ospina and Martinez assessment) prob a young striker may have to be added (Auba is hitting 30…sinus problems)

I agree with all of that, but I’d like to keep Iwobi. Not necessarily as our first choice left sided attacker, but as a backup you can’t do much better than him.

We could do way better then Iwobi, WTF are you smoking?

Gonna miss welbz. Always gave 100 percent and fought for the team. A solid team player every squad needs a few to be successful

The memories of shin, knee, and shoulder goals will always live on.

I’d keep him but that would be a great fit. The geordies would adore him.

What a shame he looked to finally be discovering a good scoring record this season.

We have to move on from the home of injury prone players though. Wilshere going proved right and I think Ramsey playing more often recently proves the same thing. It is no coincidence that most players in the early 2000s didn’t constantly break down and that is part of the success.

Oh how some people moaned when he came to us.

A mate at work supports Newcastle and it’s been a miserable existence for them the last few years. I reckon a fit Danny would be a fine player for them. He deserves a good run.

Yes because 32 goals in 126 appearances is such a standout record, made even worse with PL goals 16 in 88 games.
Nice guy, average striker.

United have never sold us anyone good. Silvestre was Wenger being his own worst enemy penny pinching a solution at the back. Welbeck was an OK back up we needed but we should have got a better striker earlier to help Giroud with. Mhkitaryan is a good player on the wane. Why Mslintat was allowed to pluck low hanging fruit is beyond me. Together with Raul they have added on substantially to wage bill (Panic Loan era now) with no benefit to our tactical or strategic needs. Mahrez would have been transformational for us last season balancing out the threat… Read more »

“Match Iwobi” Hahahahaha! Yeah, like he’s a world-beater or something.

Id like to see him stay to be fair but I only wish him the very best if he goes there.

He’ll be good for barcodes.

Benitez is building a good squad.

Unpopular opinion, but I think we should keep him. Someone who always gives 100%, is switched on defensively and can reliably score 10-15 goals with as many assists.

Those stats are damning

I’d like to see how many starts he had as an out and out striker next to those stats.

Not saying it will look amazing, just less damming.

Much underrated by too many who prefer to inexplicably big up others that don’t deserve it.

Close to 20 goals every season. Where we failed was to add another striker around him to shoulder the weight.

Instead these people criticised Giroud without any basis in reality.

Auba doesn’t start every game as an out and out striker but he’s still scored more PL goals this season than Welbz has in his 5 year career at Arsenal.

not very different from the stats of a central defender!

Wellbeck scored goals in other competitions as well so it’s not fair to judge him solely on his PL goals.

Nice guy but never fit and rarely scores. Completely logical to get rid. Don’t get anywhere as a club by keeping players based on how nice they are.

Sale on him complicated by his injury and recovery schedule. I think he’ll be out the door to make room on wages. Mslintat/Raul have been poor to say the least loading on the wage bill and unshering in this Januray the PANIC LOAN era. We’ll make room in the summer firstly getting rid of Mslintat but also more importantly some players will step down, be out of contract or be sold : Cech and Koscielny (durability) will probably free 180K + Lichsteiner and Welbeck another 180K Hopefully we can also sell Jenkinson and Elneny (if there are any takers for… Read more »

Would have been nice to see a little cash out of this one, but with his injury record….

His contract is up, there will be no cash to us.

Would be a good move for him. I’d like to see it, as he’d be an integral part for them, and I can feel for Newcastle as well….they also have a fucking douchebag for an owner.

If that so, happy for him, especially for Newcastle.

I wish Welbz well, since he’s been good for us when fit.