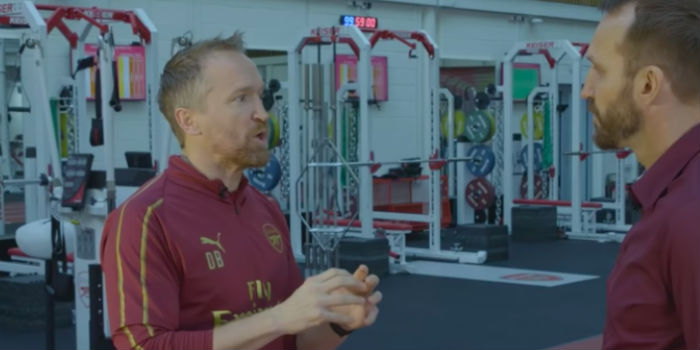 Burgess joined the Gunners from AFL side Port Adelaide in July 2017 having previously spent time at Liverpool and cuts an impressive figure at London Colney, supervising, “the fitness, the nutrition, the rehab, the physios, the doctors, the analysts and the psychologists for the first team and the Academy.”

Speaking to former Australia international Mark Schwarzer for Optus Sports, the former Port Adelaide coach explained which players most impress him on a day-to-day basis.

“I’ll tell you who I really like, the two central midfielders; Lucas Torreira and Granit Xhaka,” he said.

“I love the fact that Lucas Torreira, in every single drill, takes it personally if someone gets by him. I love that in him. Granit Xhaka is exactly the same whether it’s in the gym or on the pitch.

“Every moment counts and I reckon that separates the really good players and the top players. Some think they can turn it on in the game, you just can’t at this level, you have to train that way and those two do it superbly.”

Burgess also explained why he jumped at the chance to return to England, the similarities between Unai Emery and Arsene Wenger and how he’s tried to reshape the mentality of training sessions.

“It was a risk [coming to Arsenal], it was a really big risk coming here because I signed for three years but Arsene only had two years [left], so I knew that there was probably going to be a change of manager,” he explained.

“The chance to be here and get back into the Premier League was too good. Unai, fortunately for me, has been a great fit for us because he really does embrace everything about performance. He loves to get the extra 1 percent and looks to us to get that.

“I think in the Premier League, probably because of the money, and the reluctance to injure players because they are worth so much, they try to protect the players a little bit. I believe that you build resilience into players and that protects them from injury. We’ve had a much more aggressive training approach since I’ve been here.

“First, they [Arsene Wenger and Unai Emery] are both workaholics. Seriously, I’ve rarely worked with two people who obsess over football so much. Arsene would look at the totality whereas Unai breaks down a lot of different movements and aspects of the game. Arsene’s training sessions were more possession and game based.

“Unai has that but also breaks down different aspects, be they set plays, throws ins, moving the ball from this area to that, there’s a more defined outcome in the training sessions.

“Unai typically trains four days going into a game. When you’re playing Thursday, Sunday, Thursday, Sunday that basically means you have zero days off. The volume of games and the pressure on every game at a club like this is enormous.”

Big thanks to @TimSmith85 for the heads up on the video.

Both prospective captains, wouldn’t surprise me if Granit was given the armband if Kosc was to leave in summer.

Both bang average.Vieira,Gilberto-now those were proper midfielders.

Kwame Ampadu Down
Reply to  Tas_Gunner

I’ve been watching Arsenal for 40 years and no midfielder before he arrived or after he left has come close to Vieira. He was a once in a lifetime player. Why compare everyone else to him ? Pointless.
Gilberto ? A top class player but I see no reason on the evidence so far why Torreira won’t be as good as him. A superb talent.

“These apples sure aren’t oranges like I remember through the haze of nostalgia.”

This bar of gold sure isn’t a proper diamond.

Not surprised he pointed out Xhaka and Lucas. They both wear their hearts on their sleeves and Xhaka in particular strikes me as a real leader.

I wonder which players Burgess is referring to when he says some players just turn it on for the games.

Aubameyang for sure. Would say Ozil but he doesn’t even turn it on for games, he must be a joke to watch at training.

That’s not what his partners say about Özil, but you surely know better.

You obviously have not been watching Ozil in recent weeks if you haven’t seen his major contribution to the team.

Ozil has some of the highest key passes in Europe for the past decade, he wears his heart of his non emotional face.

I don’t think there are players who aren’t serious about training or are’nt intense. I think everyone is taking training seriously, others are just naturally more intense than others and even if you tried, you just won’t match them. It doesn’t mean others are lazy, it just shows which players have more natural aggression to their game. If you have watched Arsenal train even once, you would definitely say that Santi was never an intense player in training, but it didn’t make him a lesser player. All this focus on intensity, aggression and physicality should not distract you from the… Read more »

Another guy who seems to watch football and think about it. Maybe it’s a trend.

Kwame Ampadu Down
Reply to  A Different George

Devlin, really? Not been reading him before now I take it! Devlin doesn’t want Emery as manager & everything he says (mostly the same thing over & over) is basically a dig at him. Some obvious, some not so….but 100% that’s all he ever says.

He probably isn’t even referring to anyone at the club, just speaking in general terms

Good news. The really important thing though is that our players, not particularly these two, translate their efforts in training into consistent performance on the pitch. This is where some players continue to fall short.

*This is where MOST players continue to fall short.

Well, I was trying to be fair across the season but it’s a debatable point.

As much as Ramsey has impressed, Granit – Torreira is the strongest pairing. BUT this doesn’t mean we can’t play Rambo further forward in the slot just behind the strikers in lieu of Ozil either, particularly away in hostile environment. If midfield unit ticks, we will control the game better with better spacing between the lines of defense and attack. We can kill the game off better in Naples this way. Another (likely) option will be to go one up top with Iwobi and Ramsey supporting ahead of Torreira-Granit. The Nigerian is strong and controls the ball well plus has… Read more »

Huh? Have you missed Ramsey’s most excellent performances recently, playing next to Xhaka, Torreira, even Guendo? He’s been great. What makes him so dangerous are his late runs into the box. He can’t do that if he’s playing too far forward. Ramsey at his best isn’t at No.10, it’s as a b2b midfielder. I’m not even going to comment on the away game to Napoli. I’m sure Emery has something figured out already.

We should pull up on todays match,wishing the best