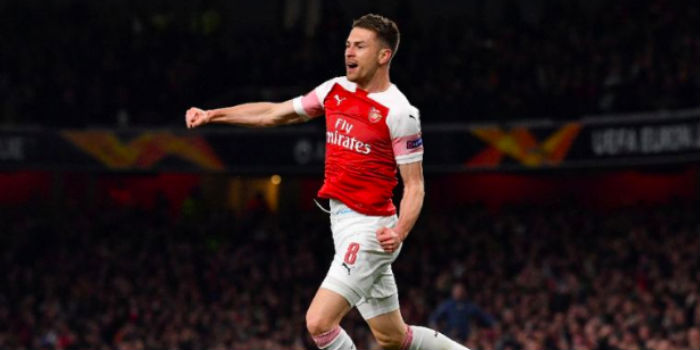 Unai Emery says he’s determined to enjoy his final few weeks of managing Aaron Ramsey after the midfielder scored one and put in a man of the match performance in the 2-0 win over Napoli last night.

The Welshman opened the scoring in the 15th minute, and was a danger to the Italians throughout, dovetailing very well with Lucas Torreira in the centre of the Arsenal midfield.

Of course these are his final few week as a Gooner, he’ll leave for free at the end of June and join Juventus, but the boss says until that time the 28 year old will be concentrating on helping the club achieve its goals this season.

Speaking afterwards, Emery said, “His performances in this moment for us show that he wants to do something important with us, because I think he feels a lot for Arsenal as a club.

“When he’s here with our supporters, he gives us all he can, not individually, but in the collective.

“I want to enjoy this moment with him. I want to do something important with him. His focus is very big, he’s thinking of Arsenal only.”

How did Aaron Ramsey rate? Check out our Arsenal 2-0 Napoli player ratings

The win leaves the Gunners in a great position going into the second leg in Italy next week, but the Spaniard has some thinking to do about how to keep his team fresh with Premier League encounter with Watford on Monday night to consider first.

“On Monday, I am sure we are going to play different players but try to find the same performance,” he said.

“Some players after playing with this demanding performance physically, maybe we need something different.

“Next week it will be the same in Naples. We’re going to prepare for Monday first, and also recover the players after the game today thinking that we are going to play a lot of matches every three days.

“We need every player with the commitment, with the behaviour and the performances.”

Almost everyone’s glad he is gone so no point crying over that really.Most fans agreed even “150k is too much for him” so we couldn’t really afford him.Really surprised he is giving his all though cause I thought he would be “shirking from tackles,stop giving 100%”.And that “his upturn in performance is basically to please the Juve fans”.But I don’t mind that really.He is just doing his job after all,hope we get his replacement in this summer cause “it won’t be difficult to replace him”.

wondering if genuine or designed to wind everyone up 🙂

Just relaying the words famous podcaster fans and regular activists on this site.Haven’t seen anyone hold their hand up and say “I was wrong”.So thought this one’ll bang.People can’t be that bloody fickle can they????

Tried to find the sarcasm but couldn’t. Ramsey’s a top top professional in today’s scumbag football world so Emery is right: it’s best to appreciate him while he’s here because he’s playing wonderful football atm and it will be a loss lo us when he leaves. This is not Alexis or RVP or that cunt Nasri. Also, if his form is to please the Juve fans, who are we to question his motive for good performances as long as he gives us his all before he leaves? Who replaces him is a story for the summer.

Idk man.But more ITK people than me made those statemets and majority nodded in unison.What changed?

His best form since his purple patch when he was the leagues leading scorer from midfield, and new use under new manager. That and more people are voicing their appreciation that aren’t the typical noisy minority. Anybody that tries to tell me he doesn’t love the club and that this isn’t a hard thing for him to do I will immediately sort into the ‘sour grapes’ bin. He’s had a lot of injury inconsistencies that affected his game over time, but the man had his leg folded over for the club and still came back to score -two- FA cup… Read more »

What changed is, most of the people who agreed with you initially eventually got a brain and changed their minds!

Please don’t go Aaron. Can we all chip in and buy him a rhino as a gift to change his mind and stay. ?

First Szczesny and now Rambo. Juventus are really good bargain hunters. Nevertheless I will enjoy watching Rambo till the end of his Arsenal days.

Look I get it. For me, he is playing in the form in his life for 4 reasons 1) He feels liberated and his future is rosy and clear 2) He hasn’t picked up as many knocks this season 3) He’s matured and Emery and co have coached him well 4) He only knows how to play at 100% I love Rambo. He will always have a place in my heart. That said, he has the chance to play for a top historic team in a league he should thrive in at 400k per week. He’s always said he would… Read more »

Next season is going to be very interesting if you have followed Aaron Ramsey. I have always wondered if the kind of player he is could thrive in a league that prioritises technical ability and tactical discipline over intensity. He will be playing in a slower league, where players are asked to think better and not faster. Arsenal on the other hand haven’t been without Ramsey ever. He has been part of the tactical setup for us because he isn’t a bench player, he has to be included into the side, so finding him a role dictated how we played.… Read more »

Yes, it’s unlikely we’ll get a like for like replacement. I wish we did get the £50-60 million transfer fee for him that we could have got had his contract position been sorted out two years ago. Ho, hum.

Sod’s Law isn’t it, but we must make the most of Ramsey while he’s with us. The tragedy is that the previous management left us in such a mess over the wage bill that we couldn’t afford to keep him, and that they hardly ever bothered to get contracts sorted out before they went into the last year. At least it shouldn’t happen again as things appear to be done on a more sensible basis nowadays.

Shame we are going to lose him for free when he is only just entering his prime years. Of course we have players in similar role like Ozil and Mhkitaryan but both are older and neither can provide the flexibility of roles as Ramsey does in the midfield. Particularly with his new found maturity in the deeper role, he has learnt to time his forays forward in support of the strikers better and found better discipline supporting in front of the defense (better spacing between defense and attack) We should have in truth tackled Ramsey’s contract last January when we… Read more »

On that note, Amazing that Emery has carried on where Wenger left off and is able to still provide the sort of team goals the Frenchman has made our club so famous with.

One wonders when Ramsey leaves and as things change in terms of squad composition how much of this characteristic of the club residual from the Wenger era will still survive.

Unai was an astute choice by Gazidis, a parting gift, a pragmatic manager whose ideals lie close to the Frenchman he has replaced.

This guy is a club legend for me! There’s no point in crying over spilled milk. Let’s appreciate him for the time that remains. I will miss him just like Santi and Rosicky.