‘On game day I am always confident’ says Jonas Eidevall

Club payments to agents revealed by the FA

The FA have released details of the fees paid by every club in England to agents and intermediaries for the last year.

In total Arsenal paid out £11,181,730, the eighth largest amount in the Premier League, during the last two transfer windows. That covers signings such as Henrikh Mkhitaryan, Pierre-Emerick Aubameyang and Lucas Torreira, as well as a number of outgoings. 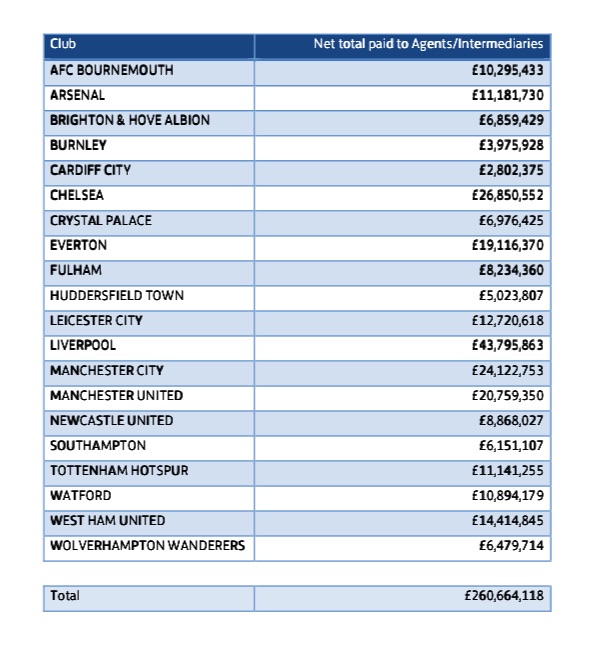 Premier League clubs spent a ridiculou £260,2664,118 on intermediaries in total.

The Telegraph reports that there’s a consensus that such spending needs to be curtailed and that the Premier League’s 20 shareholders will discuss the end of dual representation – when an agent can get their hands on cash at both ends of a deal.

It looks as though FIFA is joining forces with the clubs on this front with fees seemingly out of control.

Previous articleVideo: Unai Emery speaks to Copa90 about his first season at Arsenal
Next articleMcGuinness and Swanson rewarded with professional contracts

Arteta focused on getting more from Pepe...

Yeh, it is. So are the transfer fees, players wages and stadium admission fees.

Football has lost the plot.

It’s all about money and it’s really sad.

How is this any different to entertainment where an agent takes 10-15% of an artists fee for brokering the deal? Not sure what all the fuss is about…

If we want to talk about the gross amount of money in the premier league, say goodbye to Ozil and Aubameyang and say hello to Troy Deeney and Charlie Austin.

I get your point, but it’s kind of like saying it’s ok to be a parasite if others are doing it. The more of these types that are out there in different industries the more and more worse off the rest of us will be financially. You take agents fees out of the Premier League and all of a sudden you could make matchday tickets far more affordable. Also, this is a football blog so bringing another industry in is a bit of a distraction that could be avoided, it’s pretty much irrelevant what goes on elsewhere when the contect… Read more »

Sorry, that was rambly and poorly written, had a skinful and on a rickety train home…
I think ??

HelderHughes
Reply to  Leno me, I’ll be your friend

I think a lot of this is to do with the negative connotations we put on people who make a lot of money now. We hate Stan, we hate bankers, we hate the 1%, we hate YouTube stars, we hate football agents. We scream “how much is he on?” every time our star man misses a chance. We berate the Arsenal Fan TV guy because he spotted something we didn’t and made a tonne of money off it. And if you think the club would lower ticket prices if it had an extra 11m in the bank, you’re way off.… Read more »

Hey! We’ll have none of that valid reasoning around here thank you very much. Now go get your pitchfork, we’re off to shout at the agents today.

I have tried to reply to your comment but it’s not made it through moderation after several hours (it’s neither offensive or contains any swear words…), and due to the quick paced nature of Blogs’ News it’s soon going to be ‘yesterday’s news’ (although literally already is haha). So I’m just going to say we’ll agree to disagree, HelderHughes. Enjoy your weekend ?

It’s different because an agent in the entertainment industry takes part of the fee that goes to the artist not also additional fees from the venue/record label etc.
Agents are there to promote the talent and arrange work for them.
Agents in football are like leeches feeding off the talent of someone else because they have become too greedy to the point they also charge the people providing the work. It’s disgusting.

Parasites… Leeches… They are just doing their jobs and the good ones know how to make it as profitable as possible. You don’t think private surgeons, accountants, business owners, blog runners… don’t work out ways to make their work as profitable as they can on a daily basis? And if they can get a pay day from more than one source are they supposed to ignore that as it’s too greedy?

We aren’t living in soviet Russia, it’s capitalism. And until we come up with a better alternative, people are allowed to make as much money as they physically can.

I didn’t actually say that I, or anyone else, hate these people, just that, understandably we’re sick of people being overpaid to such ridiculous amounts. I also didn’t say that agents shouldn’t exist, just that the high-end ones are escalating fees which is having a direct effect on clubs and their fans. Having worked in places that have seen clubs go under, I can not stress enough the economical impact that overspending in football has, clubs’ hands are often forced by agents to spend beyond their means, and it’s largely for the agents’ benefit. Honestly, most football players just want… Read more »

The thing that really irks people about agents is when they hear things like Mino Raiola got £15-20m for brokering x players deal (and they can do this several times a transfer window giving them up to £50m a year), and that’s the difference, all the alternatives you’ve brought up are nowhere near the bonus levels of top-tier football agents, it’s a rather incomparable comparison to make. There’s such a huge difference between a brain surgeon taking home £300k a year for saving lives than an agent taking home £6million a year for being a greedy disgrace that it’s disappointing… Read more »

And I’m not saying clubs would reduce prices, but equally, you can’t say they wouldn’t. Maybe Arsenal wouldn’t (but that’s because we have Stan – further enhancing my point) but I can think of at least a dozen clubs that would do. And I think the general feeling towards clubs from fans would be far more amicable if that £11m was put towards buying a pacy young winger (Guendouzi was £8m – so it is possible, albeit tricky) than a group of agents, I think everyone would agree on that. I just used tickets as an example, there’s a number… Read more »

I get what you’re saying and very much appreciate your point, but the fact you are driving a huge wedge between alternate possibilities and sensationalising much of your response makes it hard to rationalise your point of view. If I were to take your equal approach from the alternate side, would you appreciate me making out that you love football agents taking so much money? Me saying you love capitalism? That you massively admire AFTV because he came up with such an idea? Let’s be practical and just realise neither of us are glued to either side and that exaggerations… Read more »

Liverpool paid more intermediary fee than our transfer budget for the upcoming window.

Off topic, but I’ll be happy if we pay a record amount this summer to an agent who can offload Mustafi!

We might have to pay another club to take him

yeah! How did they spend as much as Arsenal when they did not sign anyone!!

Not sure, but it hasn’t stopped the Spuds announcing world record profits of £117 million – albeit just over £80 million of that was through player sales. I’m just glad that we’re very much a mid-table club in the agent’s fees league.

The agent’s fees league – you win ?

A toilet that large needs a lot of cleaners.

Disgusting. That’s the money that you an I hand over to the club, directly and indirectly, hoping to see a great team emerge.

In the old days players were screwed over by clubs: now it’s the other way. Agents are parasites.

Part of the trouble I think is that the agents for Brazilian players often times “own” a percentage of a player, around 10% is typical I believe. I wonder if that’s maybe why in the past 10 years Arsenal have signed so few Brazilians because of the massive agent fees. A player like Gabriel Jesus for example was relatively cheap at 35 million euros, but there’s no telling how much City had to pay in agent fees. That surely would’ve put off Wenger in a big way.

I guess that it’s inevitable in the modern game that there will be pretty substantial agents fees, but £260 million in total is, frankly, obscene. That’s money sucked out of the game for, at best, “arrangers”. Luckily, Arsenal don’t feature too high up – it’s one case where a mid-table position isn’t too bad.

How does one become an intermediary? I want a slice of this pie

I dont care about this to be honest. Its distasteful, but clubs will just pay the players the difference, and then the player will pay the agent. Its regulation for regulation’s sake. Nobody will save even £1

I’m definitely in the wrong job….

Why don’t they repace the agents with a football version of Tinder. Cuts out the middle man.
Just picture it, your a Technical Director for a top club looking for a CB swiping away – Mustafi-swipe left, Smalling-swipe left, Jones-swipe left, Umtiti-swipe right.
‘Hey Umtiti, nice profile, you wana sign for my club? ?

? ? ? This has got to be the funniest thing I’ve read all year

At least Liverpool won that league ?

The agents are having a field day. No pun intended.

‘On game day I am always confident’ says Jonas Eidevall