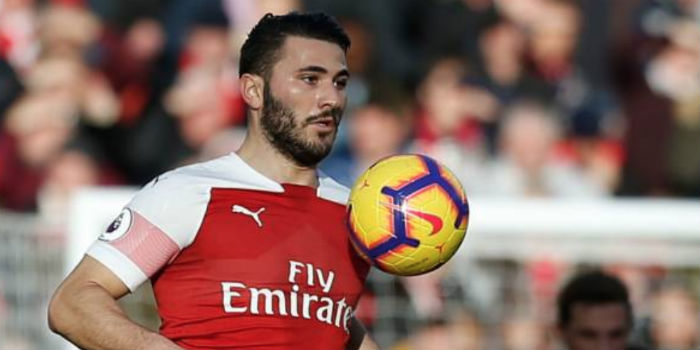 Sead Kolasinac says that the players are enjoying working with Unai Emery, and that the head coach’s video sessions are helpful for them when it comes to ironing out mistakes.

It’s one of the things the Spaniard has introduced this season that wasn’t a regular feature under Arsene Wenger, and the Bosnian international believes it’s been of real benefit to the team.

Speaking ahead of Sunday’s clash with Everton, he told Sky Sports, “He’s a very good coach.

“Technically he works a lot with us and shows us a lot of video analysis. He picks up on things we aren’t doing so well on. It helps us and brings us forward.

“It is nice for us to see what we can improve so we can discuss it and make sure we stop those mistakes in the next game.

“It’s working well for us.”

The Gunners are currently in the top four, and well in the fight for a Champions League place, but Kolasinac knows in the Premier League every game is a challenge.

“In the Premier League everything is always possible,” he said.

“I watch some games and I think ‘one team may easily win that’. I may change the channel and come back after the game and read that the team has lost so in this division it is the case that everybody can beat everyone so it is hard to predict how it is going to go.

“We’ve got seven very big games and we want to get as much as we can out of those.

“We want to take as many points as possible.”

I’d like for Unai to test if the players are really watching the contents of the USB sticks he hands out to them. I wonder who’d fail the test if it is done. Mustafi maybe? 🙂

I’ll have you know that Mustafi is a God with USB sticks. He may not be able to slide tackle, but he can get the USB drive in the slot, the right way up, every time.

I wonder if Mustafi shows up for the video sessions?

He slides in at the very last minute.

I feel worried whenever Mustafi is in the lineup but he’s still a gunner, let’s hope he at least stays error free and helps us until the transfer window. COYG!

Frankly, It is appalling to me that this modern day coaching method has not been employed until now!

I fear that it’s Mustafi’s performances that are (on the whole) embarrassing. If he wasn’t so inconsistent, well let’s be honest, poor, people wouldn’t be critical, would they? I guess the question to ask is: which other top six EPL team would Mustafi get into? Enough said!

The improvement in Kolasinac hasn’t gone unnoticed. Our most improved player this season, for me.

Yes, there’s been a real improvement there. I wasn’t a fan of his – pretty good going forward, but couldn’t defend (in the EPL anyway) to save his life. Emery has changed that – good news.

No amount of video sessions will help Mustafi

True. We were sold a dud there – he’s still one of the most expensive central defenders in the EPL. Makes you think, or it should do. Can’t see Emery making that kind of buy, which is one reason why he was brought in of course.

You know what, idgaf what people think about Mustafi. I know there’s a good player in him and believe he’ll get better, I back him. What kind of fans disrespect their own players like this???

But if he’s not up to it – and on the evidence so far, and your comments – he isn’t, why should we risk playing him until the “good player in him” as you say reveals himself? He cost £35 million – how long do we wait and how many silly mistakes is he allowed before “enough is enough”. We had that under Wenger when he kept playing people despite it being obvious they weren’t up to it. No repeat, please.

reminds me of kosciellny when he started, he was extremely error prone mustafi’s trajectory could go the way of kosciellny here’s to hoping thats the case

I am ashamed, man! No fan base I have seen abuse their players more than ours. It’s even worse off on the official FB fan page of Arsenal.

Even on days when Mustafi play decently, people still want to find fault and beat him with a stick. I don’t get it. Whereas players like Torreira play badly, lose possession and cost us a goal and nothing is said about it. Why don’t we do the same for Mustafi and indeed all players?

Very surprised to read that Wenger, a pioneer in other fields, didn’t make much use of video analysis to discover where things were going wrong, as they increasingly did towards the end of his time at Arsenal. It’s particularly odd when you consider that the vast majority of the fans at The Emirates, including myself, could clearly see things weren’t right. Anyway, three cheers to Emery for getting up to speed with this.

I love Kolasinac… and not just because of his good looks, pecs & guns ?

Wingbacks have been good this second half of season. Short of Bellerin being fit, Kolasinac (despite some of the usual naysayers who got on his back) has produced devastating output going forward. He;s like a freight train but has such quick feet. His defensive side still needs a bit of work but generally better particularly when covered by the 3 at the back with either Koscielny or Monreal. AMN IS in his NATURAL position. He played Lback before and he now plays on the right side which is his natual side. We don’t need Lichsteiner (tied up 90K of wages)… Read more »

I can see it now:
Emery: “There. When he turns left. You can see the weakness in the inside of his right knee.”
Kolasinac: “Thanks boss. I’ve got this one…”

He is our Bosnian the Incredible Hulk.