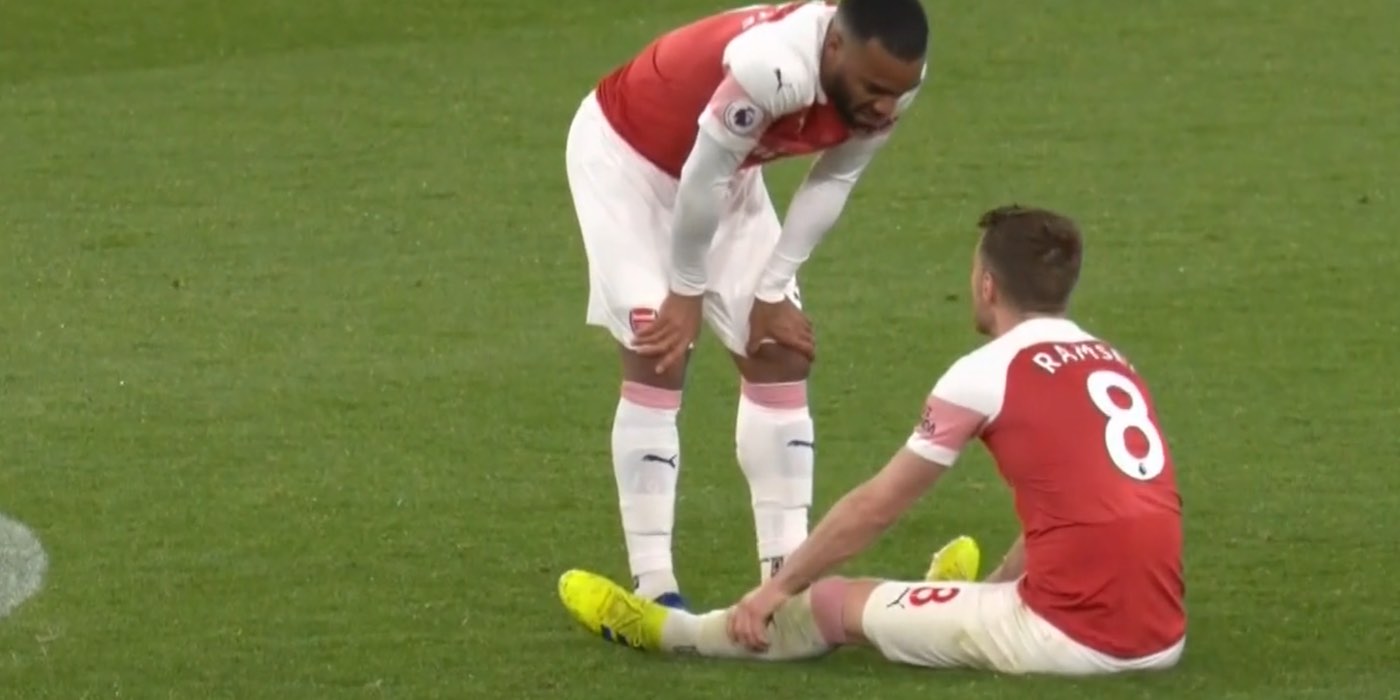 The Arsenal medical team have provided the latest injury update ahead of Sunday’s Premier League clash with Everton.

On top of the long-term injuries we have to deal with, there were worries about Granit Xhaka and Laurent Koscielny who missed Monday’s 2-0 win over Newcastle, as well as Aaron Ramsey who was withdrawn during the second half of that game.

Unfortunately, there’s nothing definitive about any of them. Koscielny and Xhaka are being assessed for a bruised foot and a groin strain respectively, while the Welshman has also picked up a groin problem despite Unai Emery putting his substitution down to cramp when speaking after the Newcastle match.

It’s hard to know how serious any of these injuries are, but with just over four weeks of the season remaining, even a minor muscular problem will have a significant impact on a player’s availability.

We’ll also be without Lucas Torreira again, who serves the final game of his three match domestic ban, but he will be available for Thursday’s Europa League encounter with Napoli.

I feel like we’ve done okay for injuries this season compared to the last few. Worryingly it can still go to shit at the worst possible time which would skew my original point.

You’re probably right when it comes to number of muscular injuries, yet still we had 3 season-ending injuries to 3 vital players. Hard to tell whether the physio team could have done more to prevent those since all 3 seem to have happened in very unlucky way.

“it can still go to shit at the worst possible time”

Isn’t that what we usually do?

Same formation that started against Newcastle, please. Mkytarian can come in for Ramsey (though if Emery is feeling cautious, Elneny may start), and Aubameyang should start ahead of Iwobi. Richarlison may be a handful on the wing, but if we want Champions League football, we have to be beating Everton away.

I think Xhaka will be ok for Everton then by the sounds of it.

It could just be that they don’t want to say too much so they don’t let Everton know who’s more likely to play?

Torreira is going to to be fit & raring to go come Napoli!!

My favourite activity late evenings in sitting with League table calculators and predict the outcome..
Think we need 15 points to secure 4th.. Assume 6 of them at home. I think we also bag 3 points in our last match if needed against Burnley even if they fight relegation. Then we need 6 points against Everton, Wolves and Leicester away, the best team besides the top 6. Conclusion, I’m bloody nervous , not sure i got the stomach to watch the Everton game om Sunday either.

Got one against Watford that’s not a happy hunting ground for us either. I’ve been keeping my hopes up that we can somehow knock Sp*rs down to 5th, with Chelsea 4th and us 3rd (Utd 6th :D) but the longer I think about it the more I worry we might not even get top 4. Out of our 5 away games Everton is probably the easiest on paper but with these injuries I don’t think a midfield of Elneny and Guendouzi will snatch us the three points. Worrying times if we can’t get Granit and Aaron back!

I’d say it’s the hardest. It’s going to be a tough scrap, if we can get a victory will be HUGE in final outcome.

6 points out of 4 away games, including watford and the 3 you mentioned?. We’ll do it. COYG!!!

I think Arsenal turned a corner with away games in the match against spurs – a game we were unfortunate to walk away from with only a point.
We never looked like losing at any point in the game.
I suspect there’s been a change of approach by Emery as the real possibility of making Top 4 looms.
We are going to see the team set up to win rather than avoid losses as it seemed to be at the beginning.
My only concern is injuries.
If Ramsey, Xhaka, Koscielny and Ozil are fit for the remainder of the season, and we have no serious worries from the rest, CL football is certainly coming to The Emirates next season.

Nice maths mate, we need to win the Everton match badly and then bag all our home games, that is all. A draw away at Licester and Wolves is a possibility also but there nothing stopping Arsenal winning all the remaining games, home and away. Gunners Forever!

You missed Watford away.

True, Arsenal have to play 4 of the strongest non-top 6 teams away (Everton, Watford, Wolves, and Leicester). But taking 16 pts from the last 18 in the league suggests a side in much better shape than the one that lost so dismally at Southampton and West Ham (especially if Emery can replicate the most recent NLD performance, minus the self-Mustafication and missed penalty).

If there is there is also Torridrarisation.

If we consider against BHA, Soton (away), West Ham and Liverpool, Torreira contributed to 5 giveaways in midfield 3 of which led directly to goals against us costing us 8 points (plus the poor clearance against Liverpool leading to another goal)

Should we then say he cost us the season with those 11 points shipped?

Dude Santi you say this in every comment thread. Get some new analysis and stop comparing Torreira to Mustafi.

Well, the pressure is on now. We’ve quite a good record at Everton, but the (long-term) lack of real quality across the squad becomes a real problem when we’ve injuries/suspensions etc. They say that when the going gets tough, the tough get going – but we’ve been very inconsistent away from The Emirates, so fingers crossed!

Lucky enough to be at training this morning. Ramsey trained, didn’t see Xhaka. Koscielny didn’t train and we were told he’s most certainly out for Sunday

in and out the team then makes himself a bonafide starter playing really well for a couple of games and scoring goals before immediately picking up a hamstring or ankle injury putting him out for 3 weeks then when he returns he is rusty and requires 2 weeks to get back to fitness and can only be in and out of the team as the cycle repeats itself. (the lack of punctuation is to represent how sloggy the situation is).

This is the Ramsey Cycle.

I feel we are about to experience this now for one last time. I mean come on look at all the important games we’ve got coming up. This is what Ramsey does. He always has. Not really his fault really but it is what it is and always has been.

I choose to don the rose tinted glasses and look at the situation whimsically in honour of his lengthy career at arsenal.

(obviously the 3400 times this happened in the last 10 years I found it maddeningly frustrating so it’s nice to not let it affect me this one, final, time.).

7 matches to go away or home, lets not bottle it.

AMN I’ve mentioned since last season is our best option as alternate Rback to Bellerin. It has been his NATURAL position for a while now. I’m not sure why there is even an argument otherwise.

Lichsteiner was a waste of time and weighed on the wage bill.

We could have kept Calum to cover Mustafi right side of defense plus as a Rback third choice.

He started his career and played to our attention at Soton as a Rback. It was his NATURAL position.

He certainly would likely fare better than Jenkinson.

Chambers should certainly be a contender for next season come summer.

With Koscielny likely going, we will have Sokratis, Holding Mustafi. Mavropanos should go out on a strong loan to develop. He still has a bit of time on his side and should come back in to eventually replace his fellow Greek Sokratis.

Whether Mustafi stays or goes or we throw our eggs in with Chambers, we may need one more Cback from market (preferably younger than Sokratis) of good quality.

1) Koscielny. Sell. Great servant for the club over the years but injuries will only worsen availability given age.

2) Sokratis – Keep but likely has one or two more seasons to go as senior player back there.

3) Mustafi – He is no where as bad as some like to imagine him but clearly he isn’t the most consistent either. Keep unless there is a good offer and/or we find a better solution in market (Remember we have distractions to add elsewhere in squad as well)

4) Holding – Definitely keep. He is calmness personified and he is the future.

5) Chambers – Assess in summer. Certainly should be in contention at right side of a back 3 with Mustafi this season. Not sure why he was out on loan other than Mslintat brought Lichsteiner in and we were heavy on wages.

6) Mavropanos – Send out on loan to develop quicker. He is still relatively UNPROVEN. He has time on his hand and should ideally come back in a season from now to understudy then replace his fellow Greek.

There is of course also the emergency back up in Monreal whom although also getting on we should extend for another season.