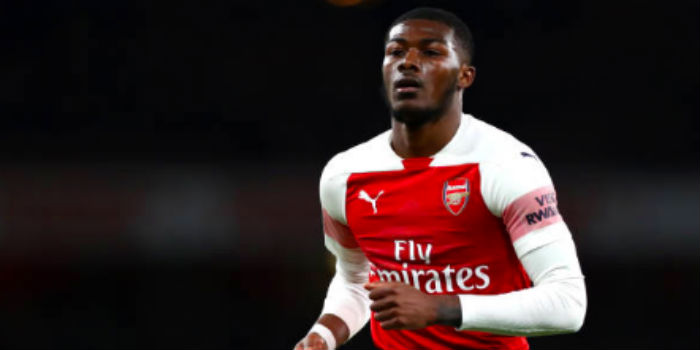 Ainsley Maitland-Niles says he’s proud of his performances at right-back having been asked by Unai Emery to cover the position in the absence of Hector Bellerin.

The England under-21 international looked a little shaky when he was asked to take on the role earlier in the season, but in recent weeks – including last night’s 2-0 win over Newcastle – he’s started to look more comfortable, both defensively and offensively.

“I’m trying,” was Ainsley’s assessment of his efforts when quizzed last night.

“I’m just trying to be consistent with my performances.

“I speak with the manager quite often and he tells me what he wants me to do, what I do well and what I can improve.

“It’s going well at the moment so I’m proud.”

Considering the boss has two bona fide right-backs to choose from, it’s a testament to Maitland-Niles’ willing and quality that he’s still being favoured while Hector recovers from his ruptured ACL.

As a regular in the team, Maitland-Niles knows all too well how much the first team are desperate to end their Champions League exile.

Up to third in the Premier League table with seven games remaining, it’s all about focus.

“To play against all the big teams would be fantastic and you get to test yourself fully.

“That’s all we wanted to do, to go out there and win today’s game today. We’ve made one step closer to succeeding.”

Maitland-Niles: I’m not a defender, but I’m trying my best

Did really say “best European competition in the world”? ?

He also said he wanted to win today’s game today. Thankfully, he is not paid for syntax.

It’s better than the Europa League I suppose…

Where do we think he’ll eventually end up playing?

I think he’ll go onto next season as Bellerin’s understudy but continue to be a useful utility player. I still think he’ll be a decent midfielder eventually but Emery demands positional discipline in the middle and that won’t happen overnight. Pace, power, good feet and a quick learner – he could end up anywhere on the pitch.

Near enough the Ramsey position IMO. Just wish it wasn.t next year

Hector can’t play every game next season, plus if the Spaniard has another great season with us I expect the likes of Barca and other scummy Big clubs like PSG trying to tap him up by offering to double his wages, and he might just leave, who knows with players these days? ANM would be wise to grab his chance and develop into a quality RB, rather than wait for his preffered position in MF to open up.

Love watching him develop his game. His knowledge of when to pass or when to dribble to escape pressure was great, and he also won some towering headers. You injury gods better leave this man alone!

My heart was in my mouth when he went down against Newcastle. Thankfully he got up.

U beat me to it Timsh..but i will always remember the quote. Not a hater btw, I really like AMN

He is doing great, Niles.

Been brilliant… long may it continue

He certainly has found his “NATURAL POSITION”. I said it last season we should switch him to Rback. He excelled as Lback for us but right side is his natural side. Still a plenty of issues to iron out in his game position-wise, he compensates with remarkable athleticism and recovery. Against Newcastle, his pace out wide was telling but also the weight of his passes. One on ones need a bit more work but he has the technical skill set to get by. He is night and day better than (the limited and older) Jenkinson by a country mile. We… Read more »

Worth noting Calum Chambers is thought highly at Fulham despite relegation today and them shipping over 70 goals. I mentioned start of season we were making a mistake with Sven bringing in Lichsteiner. It was a waste of 90K which could have been freed up in January instead of recourse to “PANIC LOAN”. Had we kept Chambers, we would have no need for Jenkinson either. Calum impressed for Soton at start of career in his “NATURAL POSITION” at Rback. BUT he is maturing now and Cback looks like a good bet for him particularly in a back 3 on the… Read more »

Wasn’t Chambers was being played in midfield at Fulham, at least for a period? Anyway, press reports regularly suggest that he’ll be off in the Summer as part of the bigger overhaul of the squad. I agree that Lichsteiner has been a waste of money, but I guess we didn’t know that for sure at the time we arranged the loan. Despite his commitment to the club, I don’t see Jenkinson staying after this season either.

Lichtsteiner deal isn’t a loan – he signed on a free on a 1 year contract.

OK, same difference though – we’re paying his wages with no additional fee. The bottom line is that he’s (very) time-limited (thank goodness).

He’s making progress. We need youngsters coming through – and staying there once they have – not only for themselves but to show other talented youngsters either at the club already, or thinking of joining, that a path to the first team/squad is open. There’s been some press speculation about Bellerin departing in the Summer, don’t know if that will come to anything though.