Arsenal had to wait even longer than everyone else to come back from the international break but they made it worthwhile with a very strong performance that took them into third place.

Arsenal 2-0 Newcastle: By the graphs 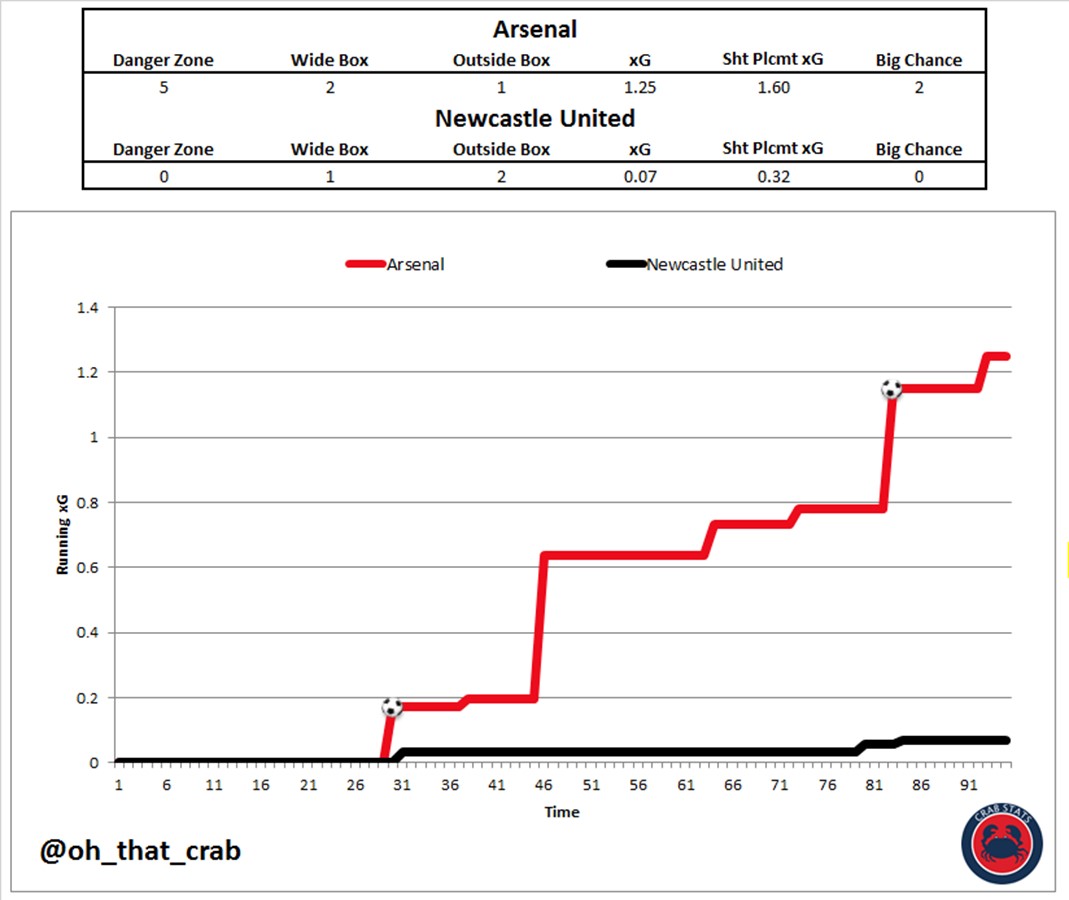 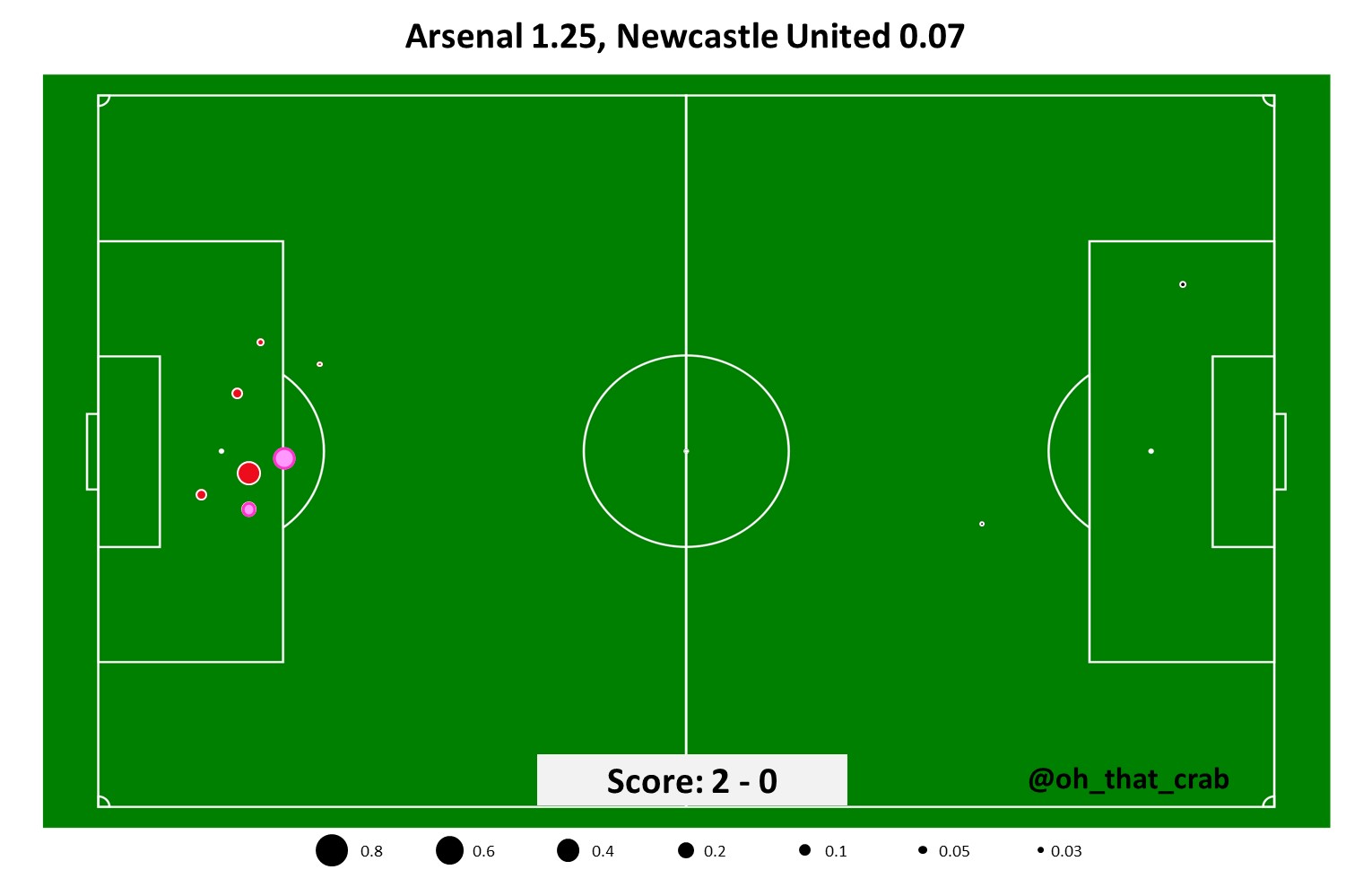 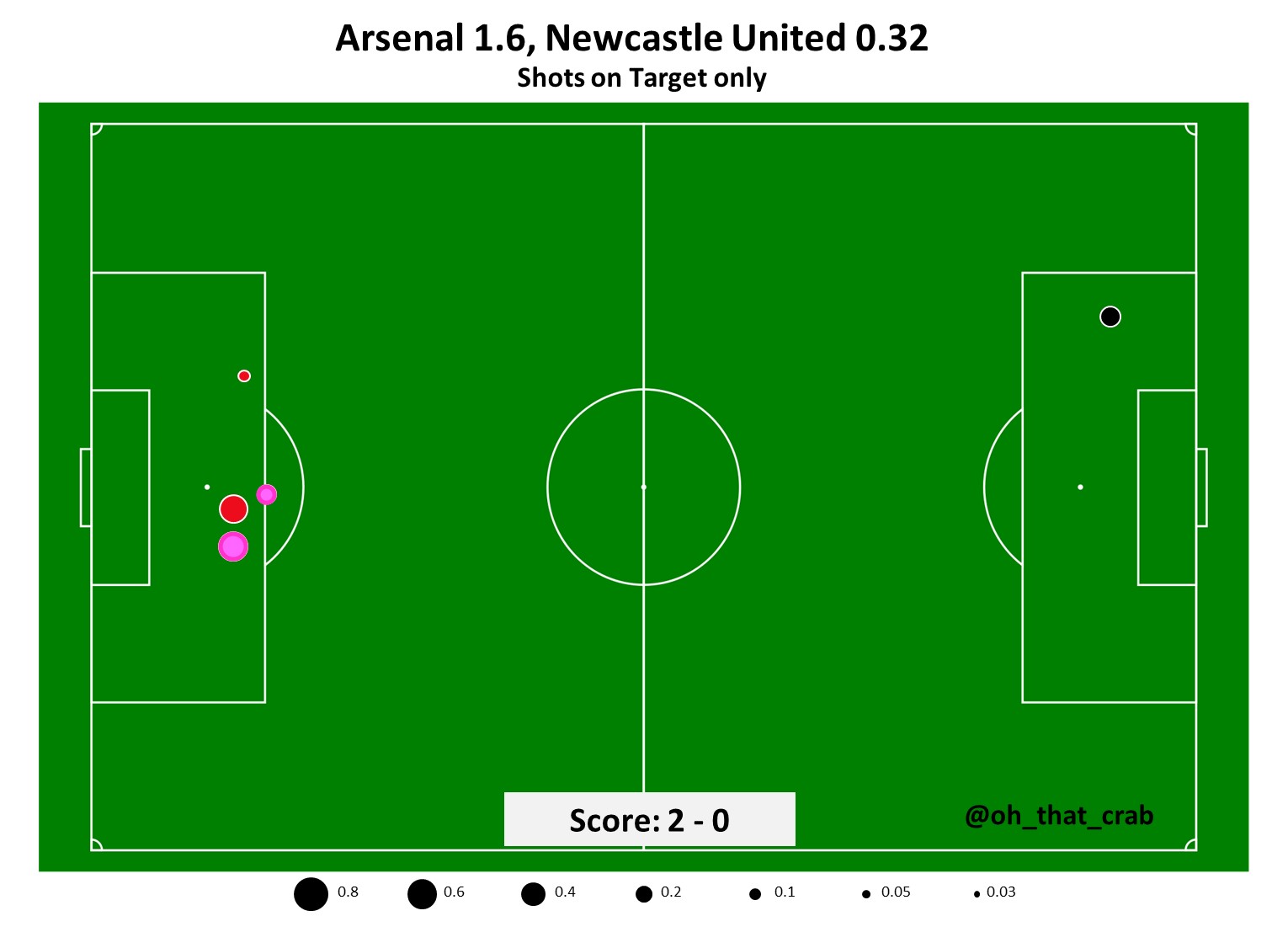 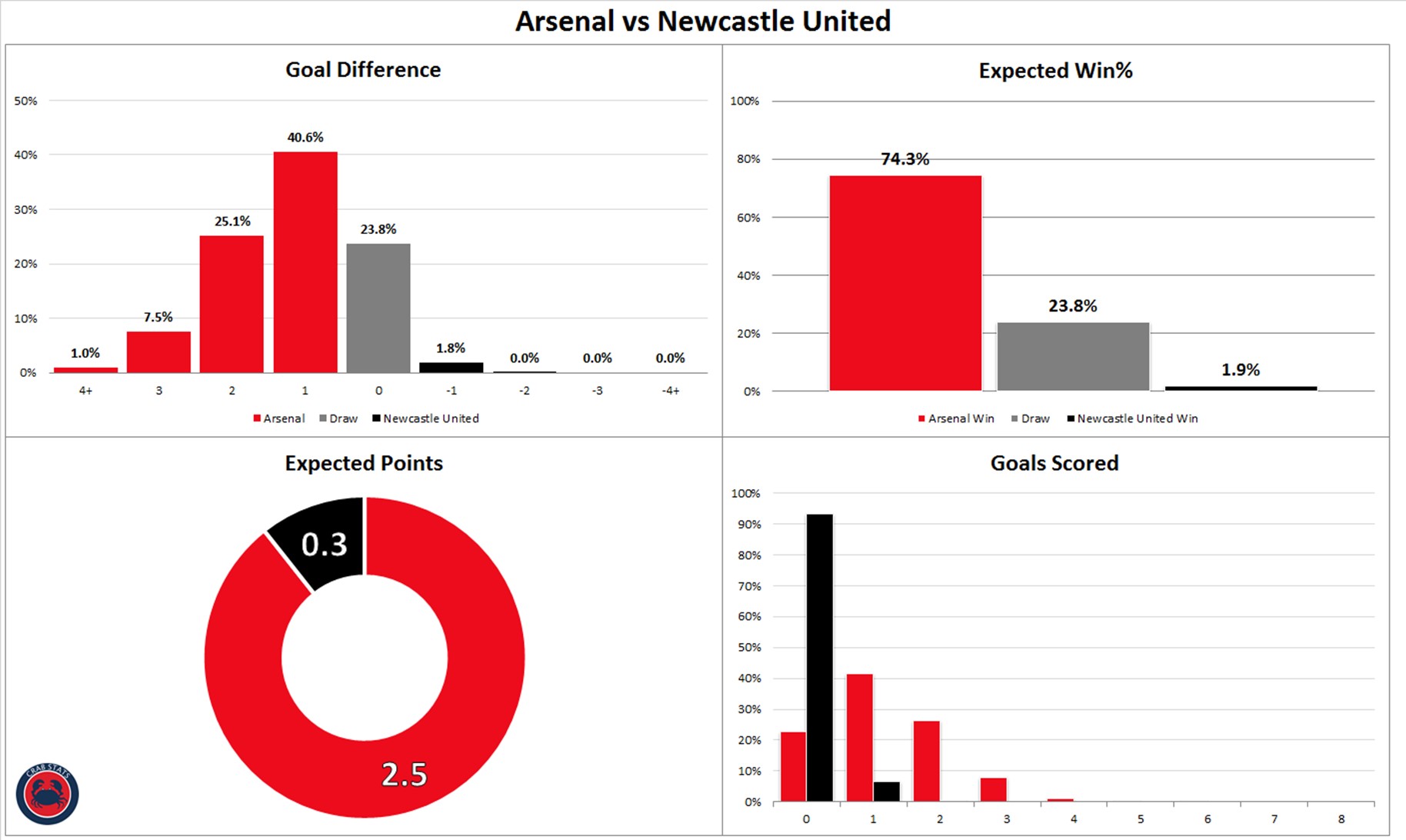 7 – Shots for Arsenal, Aaron Ramsey and Alexandre Lacazette were tied for the led with 2 shots each.

4 – Shots on target for Arsenal, Lacazette led all players with both of his going on target.

12 – Ball Recoveries by Aaron Ramsey, led all players. special shout out to Mesut Özil who was second among all players with 10.

32 – Touches in the box for Arsenal, including 13 for Alexandre Lacazette, 7 for Sead Kolasinac and 6 for Mesut Özil.

6 – Touches in the box for Newcastle United.

5 – Shots in the danger zone (danger zone is the center of the 18 yard box and 6 yard box) for Arsenal.

0 – Shots in the danger zone for Newcastle.

118 – Possessions of at least 2 seconds for Newcastle.

44 – Possessions of 5 seconds or less for Newcastle.

37.3% – The percentage of Newcastle possessions where they controlled the ball for 5 seconds or less by Newcastle. For comparison, Arsenal had just 28% of their possessions end after that amount of time.

6.8 – Passes allowed per defensive action in the Newcastle defensive half by Arsenal. (PPDA is one of the more rudimentary measures of the amount of pressing a team does where fewer passes indicates a higher pressing team, for the season Arsenal are third fewest passes allowed at 9.3 PPDA)

26% – The percentage of Aerial Duels won by Salomon Rondon

There are different types of dominating performances. There are the ones where a team blitzes the other and puts 3 or 4 goals past them while adding pressure and shots. Then there is the performance like we saw from Arsenal last night.

This was a match that Arsenal were fully in control of, if not for a couple of… let’s go with questionable referee decisions they could have scored more but it was a match that never felt like it would go another way.

Arsenal had a massive lead in possession, no matter how you measure it. They had 64% of the touches, 73% of the total passes, they were in control of the ball for 41 of the 66 minutes (62%) that the ball was in play. Not only that they really used their possession to push Newcastle very deep. The average possession in this match was just on the edge of the Newcastle defensive third (41 meters from the Newcastle touchline).

The other thing that really struck me in this match was just how effective Arsenal were at attacking Newcastle after Arsenal lost possession. This was one of the more effective pressing matches that Arsenal have had in my opinion, Newcastle’s game plan was to play direct balls over the top, either to Solomon Rondon or into the wide areas for one of their forwards to chase. Arsenal did a great job neutralizing this.

Newcastle are one of the longer passing teams in the league but they do it a a fairly high completion rate in this match they were well under the season average. They also could not string together passes if they tried to play short very effectively with Arsenal keeping their sustained periods of possession well below that of average teams.

I asked for questions on twitter about the match:

Did Nacho put in a notably high number of tackles? Might just be me and my patchy recollectiom, but it seemed like he was very front footed, even for Arsenal.

Yes he did, he led Arsenal with 3. With all of these in the Arsenal defensive portion of the middle third and his one time dribbled past in the Newcastle half. He also added in 2 interceptions and 3 blocked passes. I don’t think he has the legs to be a full back anymore but he does really well as the left sided center back in this three at the back system.

Mustafi misplayed 5 passes in the opening 30 minutes, 3 in the final 30 minutes and 16 overall.

Maitland-Niles misplayed 3 passing the opening 30 minutes, 3 in the final 30 minutes and just those 6 overall.

Can we have a comparison with the same fixture last season? Distance covered, passing accuracy, xG maybe?

Unfortunately the distance covered data is not widely available and it is not included in the event data so I can’t compare that but others I can.

What about grounds covered by Guendouzi and part of the pitch where his defensive contribution was better. It felt like he was everywhere making tackles and intercepting.
Why not comparing him with Xhaka’s ground covered per game

Again no distance data is available to me but I think that this is a good observation. 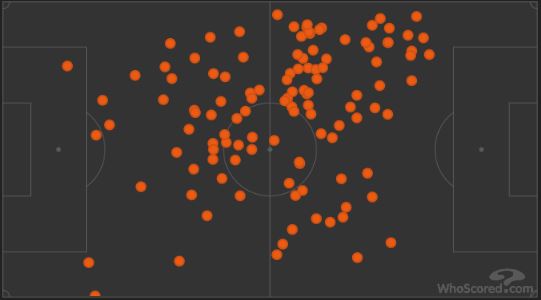 Looking at his touch map he really is everywhere in this match. I also think that he probably played a different role than what Xhaka would have done, so the direct comparison is hard because they approach the game different and it would probably change how Ramsey played.

Did Guendouzi lose the ball more often than any other player and if yes, does that tarnish his excellent game.

He turned the ball over 5 times, which is 2nd most behind Ramsey’s 6. Counting misplayed passes he gave the ball away just 12 times which tied for 6th most and well behind Sead Kolasinac’s 29 times.

AMN’s performance, positioning and work rate. It looked like he had a mature performance last night.

I agree with this, he has really grown into his role. Last night he passes at 84% overall and 88% in the defensive and middle thirds where giveaways can be especially costly. He had a couple of tackles and an interception to go along with it.

Not his best day passing, 60% overall and just 1 of 9 on long passing. He was 11 of 11 on his short passes and did a good job with his distribution. He also had one long pass that was down the left channel that didn’t come off but would have set up a great attacking situation.

Best ways to analyze MG’s performance. I loved it. Others didn’t. Who is correct!?

Saying an opinion is right or wrong isn’t really possible, as opinions aren’t facts and people have different preferences in what they want from a footballer. That being said I think it was a good performance, there are still things he can get better at (namely playing quicker when he is receiving the ball facing his own goal, teams have really keyed on this as pressing trigger) but he has far surpassed reasonable expectations this season. This match was no different.

He got a lot, but I actually like that shirt even if the name on the back isn’t a player who with hindsight was a great choice. See below at about 9 minutes for the reveal.

Sources: Opta via Whoscored, StatsZone, Understat and my own database

I think the bald guy with the spuds hoodie has worse taste that Yankee goober lol indeed I was wondering what the heck a spud was doing on an arsenal stream!!!

How about comparisons of last season and now? Points wise we’re better. How about other stats?

I hear about Ozil this , Ramsay that… but the reality is Matteo bossed it!

Wow manure getting turned over by wolves again lol rather like wolves at the moment ? poetic that they got a player sent off and then scored an own goal!!!

Need to ensure our away form matches Emirates and we can secure 3rd place. How much things change in a matter of weeks – need to ensure it doesn’t swing back again.

I’m struggling to make up my mind about the two clubs to miss out on CL out of Tots, ManU and Chelsea.

I’ll happy with any two. My thinking is looking a little long term, with Chelsea in turmoil and owner losing interest in bankrolling them, possibly they are the least threat for next season. With Spuds moving to the new stadium, it would screw up their transfer plan if they don’t qualify. With the money ManU make, CL will swell their transfer kitty further.

For me it’s Man U and Spuds to miss out – 100% Spuds – just imagine how funny it will be for them to have no Champions League in their shiny new toilet seat stadium next year.. Also, I suspect that it will make it harder for Deals Levy to find a big money sponsor for the naming rights to said toilet seat, meaning less transfer funds (what you’ve said). United – it is always glorious to watch United squalor about below the elite level of football. Watching all of their glory hunting fans turn to indiference last year while… Read more »

I’d rather not give it to Chelsea seeing that if they go to EL and lose Hazard + transfer ban they could likely be crippled hard. I’d rather begrudingly let Spurs take it coz chances are Spurs are gonna Spurs.