Wolves 3-1 Arsenal: By the numbers

That’s two losses in a row for Arsenal.

The top four race which Arsenal once controlled their own destiny in, now depends on other teams slipping up.

Losing away to Wolves isn’t into itself an embarrassing result but Arsenal sure did their best to try to make it that way.

This run of fixture congestion, with a few extra injuries mixed in, exposed Arsenal’s stretched squad and lack of depth. These losses have really hurt Arsenal’s pursuit of the preseason goal of returning to the Champions League. Arsenal have three League matches left and with no margin for error left to play around with.

Wolves 3-1 Arsenal: By the graphs 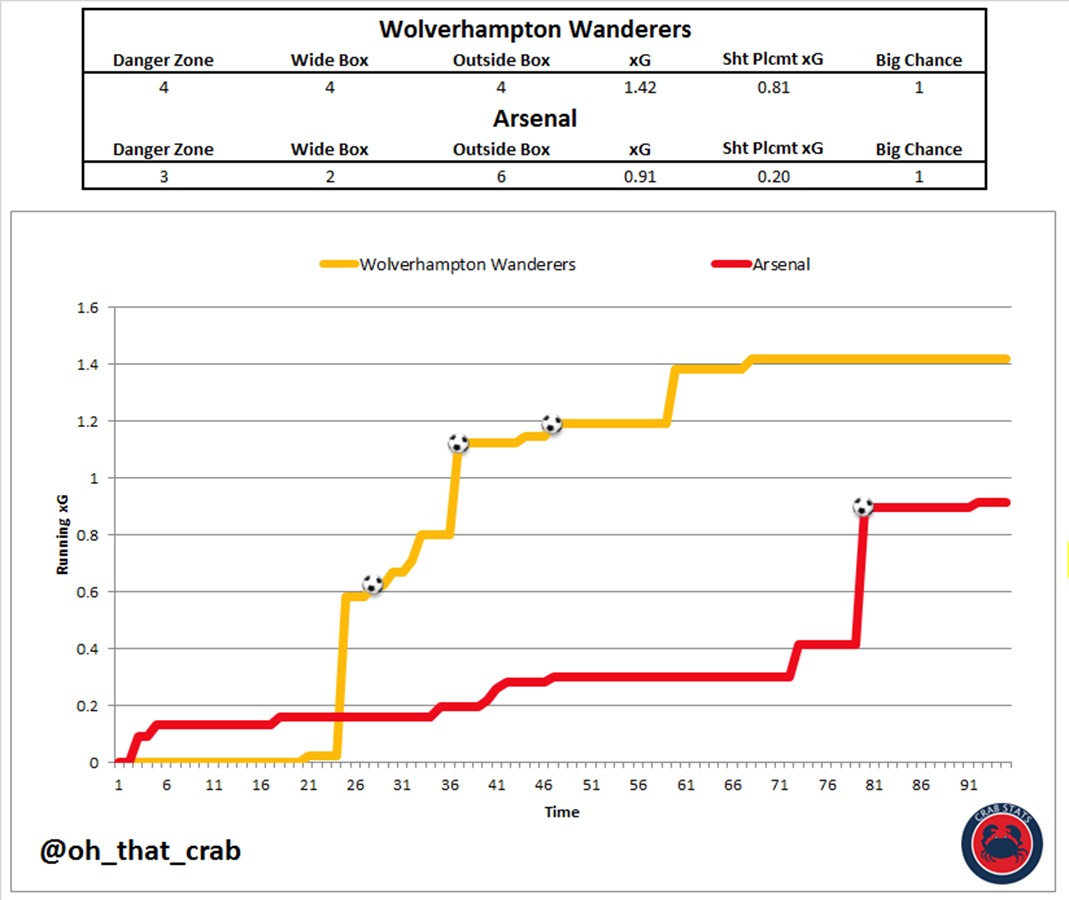 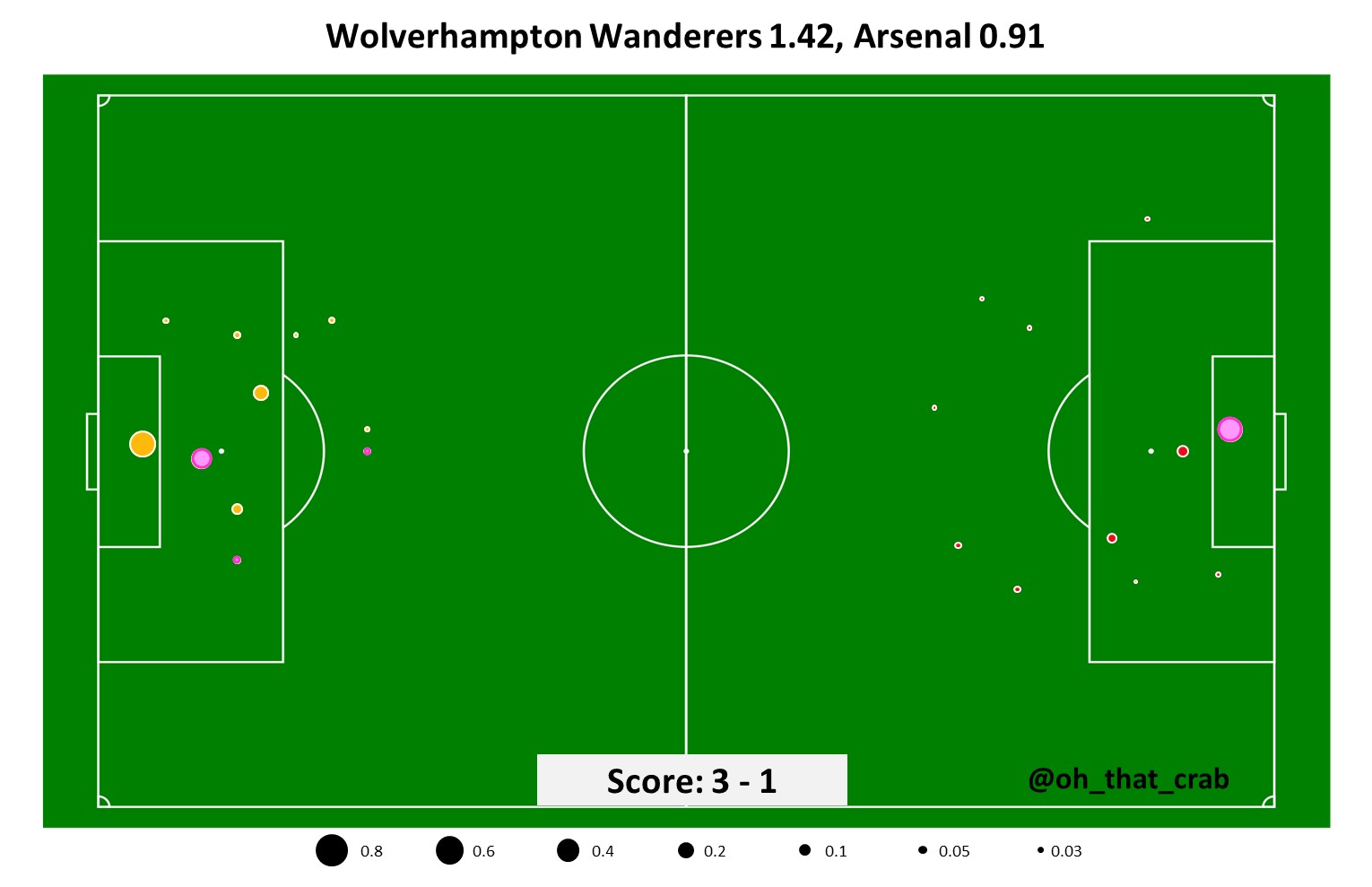 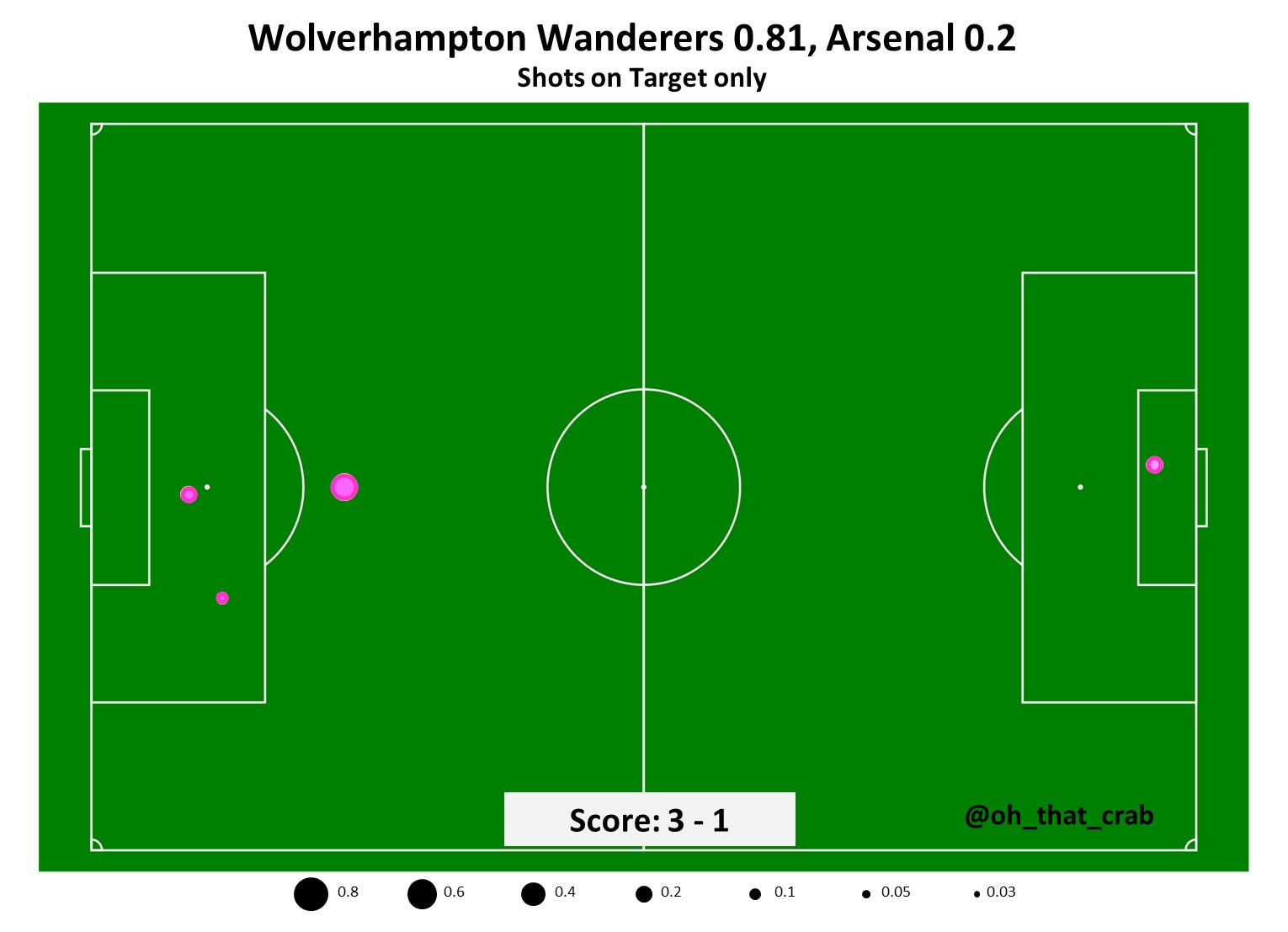 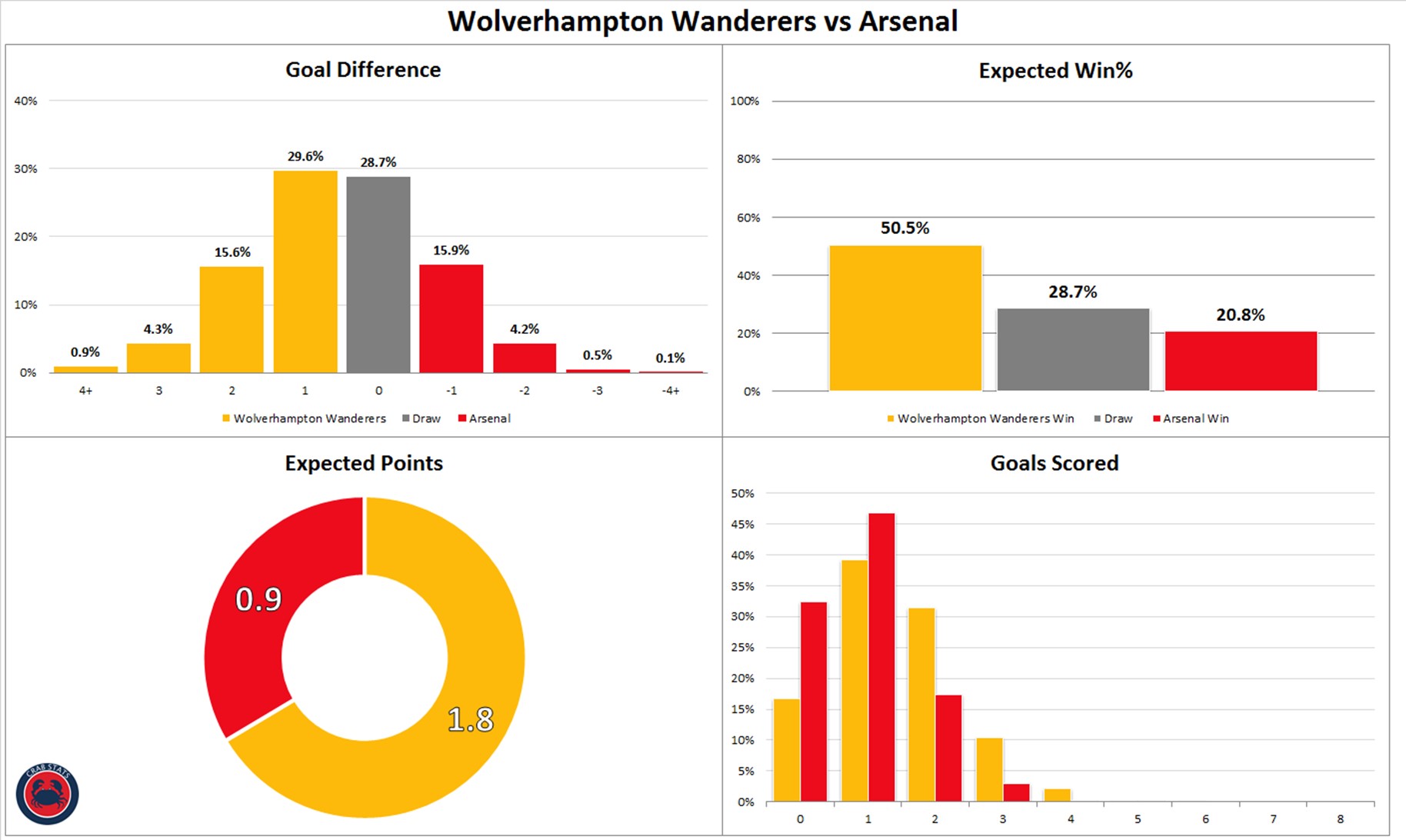 Wolves 3-1 Arsenal: By the numbers

70.6% – Possession for Arsenal in this match

74.7% – Percentage of total final third touches that Arsenal had in this match

64.7% – Percentage of total touches in the box that Arsenal had in this match

38.5% – Percentage of total shots taken inside the box by Arsenal in this match

Possession is nice, mostly it is a positive, but it really has to be with a purpose.

In this match (and like so many others before it this season) Arsenal’s plan A to attack the half spaces of the box to deliver cutbacks were well defended by Wolves. Arsenal didn’t or couldn’t come up with something else to threaten a well drilled Wolves defense.

Arsenal also failed to use their possession edge for defense. You will see other possession heavy teams like Manchester City use possession to stifle and suffocate teams, Arsenal could not do this against Wolves. Wolves were especially threatening after they scored the first goal even with most of the ball in their half and were by far the more dangerous of the two attacking teams.

1 – Chance created, a shot for Henrikh Mkhitaryan from outside the box with an xG of 0.03 (3 goals scored per 100 shots)

1 – Foul committed, that ultimately led to the opening goal

I don’t want to come across as unduly harsh on Nacho Monreal, he has been a very good player for Arsenal and was an underrated member of the FA Cup winning sides of the late Wenger years.

All that being said, it is becoming more clear week after week that he no longer can do everything that is required from a fullback in Unai Emery’s 4231 system. He is still a very good technical player but he no longer has the athletic abilities required to be both an attacker and defender any more. With Sead Kolasinac also not a fit as a true full back, a player who is a proper fit in the back four is rapidly rising up the summer transfer shopping list.

Leno has a day to forget

3 – Shots on target for Wolves

0.8 – The expected goals for those shots on target determined by where the shot was taken and where it was within the frame of the goal.

1 – Cross not claimed (also classified as an error)

Bernd Leno has had a very good season for Arsenal (I have really caveated my criticisms today). This was not a good match for him however, probably his worst with Arsenal this season.

The second and third goals scored by Wolves can have a good amount of blame appropriated towards him. He came out to claim the cross for the second and never got close to it. The third was aimed toward the corner but it was a tight angle and Leno was positioned well that he probably should have not let it through.

On a day that his teammates didn’t create much Leno was unable to perform at his usual level and keep Arsenal in the match. I hope he bounces back quick and gets back to his previous form.

-0.18 – Total offense value added (this basically means that his contributions helped Wolves more than they helped Arsenal, mostly driven by the number of times he lost the ball which was worth half a goal towards Wolves)

Some of the top line numbers for Özil look pretty good. He led all players in final third passes and passes completed into the box and even added to chances created. Yet, these really don’t tell the whole story of his match. He didn’t contribute much defensively in this match and his ability to stay on and keep hold of the ball were severely lacking.

Using my Total Offensive Value Added statistic which looks to try to put a value on things players can do in attack (progress the ball through passing, dribbling, carrying the ball, creating shots and getting shots) was the worst of all players. This is a statistic that is practically designed to capture all of the nuanced things that he contributes through his creativity but here it captures just how poor overall he was. With Aaron Ramsey and Pierre-Emerick Aubameyang out for the match it fell on Özil to step up and he didn’t.

Not all doom and gloom in the top 4 race 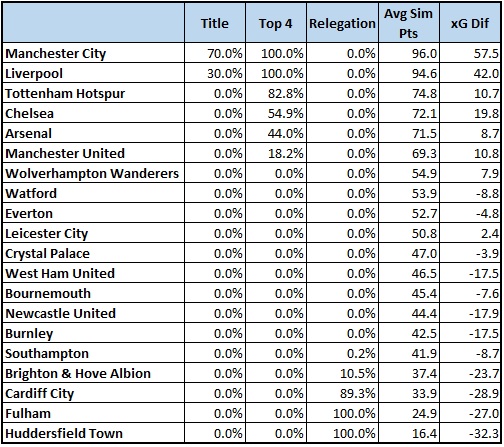 I ran a simulation of the rest of the season and Arsenal finished in the top 4, 44% of the times. FiveThirtyEight has Arsenal projected at that same amount to finish in the Champions League spots.

It is out of Arsenal’s hands but it is still just under a coin flip from happening.

Sources: Opta via Whoscored, StatsZone, my own database and FiveThirtyEight for the simulated odds.

Previous articleVideo: Wolves 3-1 Arsenal ‘on the whistle’
Next articleIwobi: We have to move on

Why pick and choose your scapegoat?

care to highlight the great partnership of Sokratis and Koscielny?

I would say that the biggest issue isn’t the individuals, but the team’s tactics. Emery is lauded as a tactical coach, but if you have ever coached professionally before in your life, you will see that all he does is alternate players and not systems. He switches formations, makes substitutions and rotates a lot, but those only form the structure within which tactics can be applied. Changing from a back four to a back three isn’t that tactical if you don’t put the tactics around the change in place for the players to follow. Playing five strikers doesn’t mean he… Read more »

Thanks for putting this much more eloquently than I have been able to in my other comments regarding my views on Emery.

Very well said, even if it falls on deaf ears.

If Arsenal don’t make it to the top 4, it’d be because we don’t deserve to be there.
I feel like our away from went down hill after we got rid of all the best dribblers in the team.

I agree wholeheartedly with your first sentence. Who are you thinking of when you say best dribblers?

Sanchez, cazorla, the ox wilshere all left in a year

You forgot the biggest star of all…

Shits given by the Arsenal players: 0

Possession is just total passes in the game. That’s how they measure that stat.
So two passes sidewards aren’t as threatening as one good pass forward.

I think Emery must have lost his video tapes because anyone who has seen Wolves against a top six side this season knows their game plan.

Really worried for the rest of the season, and next without Ramsey. Desperately need some pace and physicality on the wings. If not it’s all so predictable

It’s the story of Arsenal at the moment, that instead of a player rising above the mediocrity, to rescue a game, we seem to find one player each time, who has a complete shit show performance that ensures the game is beyond redemption. Against Palace it was clown car Mustafi, this time it was Leno (of all people).

Wolves have played one less game than us since 30th March but are – like us – only “up for it” against the big teams. They beat us and Manure but lost to Watford, Southampton, Burnley and couldn’t score versus Brighton.

I had high hopes that Emery would sort our defensive frailties out but it has continued with just the personnel being adjusted.

Emery is such a limited coach, but he was the only one who was ready to join. Arsenal fans need to take the blame. They have been non-stop rabid for so long, they have lost all sanity. Instead of going after refs, they started to fight each other. Emery started by doing the managements bidding and getting the big wage earners off the books – ramsey and ozil. Then came his love for doozi. Then came his one and only tactic, that of the cutback. As long as the strikers were firing it worked. Now they are found out. They… Read more »

I feel your pain Xhaka. I have also turned away from Arsenal games this season, for the first time in my life. It happens even when we are winning. I tried to explain a while ago that Arsene was one of the best tacticians in the world, but his work was overshadowed by this narrative of him being a laissez faire manager. It is assumed that he just let his team out and said “go and enjoy yourselves” or “you are better, go and show it”. But nobody tried to analyse why we seemed to score so many combination goals,… Read more »

Ramsey being let go has hurt really badly. Arsene I could take, because this fanbase didnt deserve him anymore, and he didnt need to do this job anymore. but Ramsey, after 10 yrs, without a single blemish, with cupwinning goals, being shown the door and maligned…. This is not my club anymore.