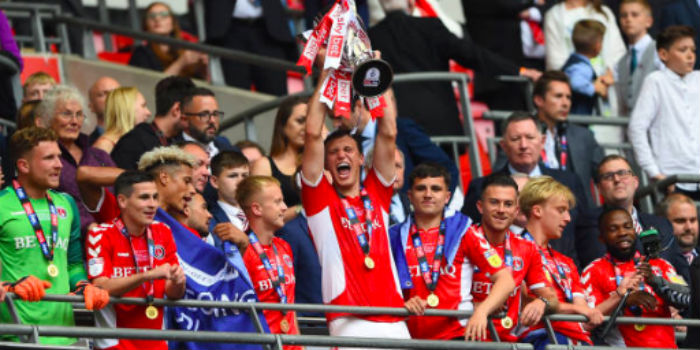 Krystian Bielik was awarded the man of the match award as Charlton secured promotion to the Championship with a last-gasp 2-1 victory over Sunderland in the League One play-off final.

The Poland under-21 international started on the right side of a three-man defence before moving forward to anchor a midfield diamond after the break.

The Addicks bounced back from an awful early own goal when keeper Dillon Phillips failed to control defender Naby Sarr’s back pass and ruefully watched it roll into his net.

The second half was a tight, tense affair that looked to be heading to extra time when defender Patrick Bauer scrambled home a winner in the 95th minute.

There’s no rest for Bielik, he’s due in Italy in the coming days to join Poland’s preparations for the under-21 European Championships. After that, he’ll have to decide what he wants to do with his future.

This was Bielik’s third loan spell since joining Arsenal in 2015. He enjoyed a fruitful spell at Birmingham City and has also played for Walsall. Those who’ve watched Charlton this season have tipped the Pole for big things, whether Unai Emery’s coaching team agree will become clearer later this summer.

LANS! Good for him.

we need to extend him ASAP

Another to assess this summer.

Not the answer in midfield for us but could be useful defensively.

Its a big jump from League 1 to Premier, let’s hope a CB pairing of Bielik/Mavropanos will take Arsenal to the next step competing for chamions league! I kid I kid, Mustafi/Mavropanos is the obvious option!

I heard Baptista is available, too.

Is Richard Wright available for behind them?

Hopefully he will stay with us next season

the kid ticks so many boxes for things we need and things we lack, it’s just ridiculous

It’s not like we are exactly blessed in the defensive department at the moment.

Xhaka, Torreira and Guendouzi, who do you want them to sell to make place? There will probably be an opening to play alongside Sokratis in defence. I am afraid Holding is already holding the position plus we will probably buy an established defender this summer. Whatever the situtation, he deserves the opportunity to prove himself to the manager.

There’s this amazing about squads, in that you can have more than 3 CMs in your squad.

How many games has our fourth CM played this year?

I’d say Elneny has played enough games that can be given to Beilek to begin with.

Yes he’s worth keeping. Some games we want a pure DM which he can do, whilst the others can be B2B and/or AM, depending on the game/opposition.

Xhaka, Torreira and Guendouzi, who do you want them to sell to make place? Xhaka.

He is admittedly not a DM. He plays there because the team has options at CB.

I believe an assessment on Bielik stated can get turned and he doesn’t have the ability to recover as quickly when he does.

CB is his more natural position, but it is hard to start young CBs, especially in the Premier League.

He joined us as a DM and plays there regularly for every team he’s played for on loan and in our youth set up, so he definately is a DM.
If anything the CB role is his secondary position, but he really suits a back 3.

Why the hyperbole….it’s obvious from the loan watch segment on the Dot.com site that all the loanees are being monitored. I would certainly like to see Bielik as part of the squad next season but I won’t be calling for anyone’s head if it turns out that people with more knowledge than me don’t think he’s up to muster!

Give him a contract extension already. Some people say the jump from Championship to the Premier is a big step, and that might be the case but we won’t ever know if he can do it if we don’t give him the chance to start with, also he can easily cover 2 positions in our team, and has been one of the best charlton’s players from what I can read, so worth to take a chance with him.

Moreover, if we are linked with a player from ligue 2, we can absorb our own who’s good enough to challenge and on loan in the championship.

Exactly.
Fans will say he can’t carry it into PL from Championship/League 1, but get excited over a 20 year old from the mighty Ligue 2.

Yeah and that also wasn’t a problem for Guendouzie. I think Bielik will do just fine.

So many can be added to that list.
I mean, imagine how this place would react if last season it was announced we’d spent £16M on Championship player, Ruben Neves?

I watched because my barber said his Dad said Bielik was like Beckenbauer. He certainly was a class above the rest and what was most impressive was his organising of those around him. Bring him back and give him a go.

A leadership quality and perhaps a future captain.

Quite , im your dad’s age and saw Beckenbauer – same . Neither Wenger or Emery see it that way so my advice to him would be to leave Gunners.

Why don’t you just give it up already. Wenger signed him you absolute tool.

Since when were you privy to what goes on in the head of Emery or Wenger. A loan doesn’t mean a player isn’t good enough…sometimes you send a player on loan to develop their game, as happened with Nelson and Smith Rowe. Bielik is still under contract and should at least get squad minutes next season, unless his agent thinks otherwise.

I hear people saying the jump from the Championship to the Premier league is different and I agree, but if he has talent and he’s good then he’s good, as with everything all he as to do is adapted. Give him a couple of season in the PL and he’ll be just fine, I bet the house he’ll be way better than mustafi!

The decision will likely be whether we keep Bielik or Chambers?

Both can play centre half and centre mid, I’d be inclined to try and renew Bielik’s contract and see if we can get £20- 30mill for Chambers?

He’s good and needs a chance. We’ve got two young defenders out on loan who have done really well, Chambers won player of the season at Fulham and Bielik has been putting in Man of the Match performances for Charlton. We would be crazy to give up on them so early in their careers, they both need to be given proper chances next season. I’d rather keep Kos for another year and give these two a chance than spend a small fortune on a Barca reject with one knee.

Excellent, now let’s get him a new contract and send him back to charlton for one more season

Why send him out again? Furthermore, with 1 year left, why would he even sign just to be sent off on loan again for the 4th time? I think sometimes us Arsenal fans have an inflated view of our status these days, Beilik can leave knowing some better top teams will be interested. This reminds me of when Arsenal fans felt Gnabry needed more loans as he obviously wasn’t good enough due to his West Brom loan. Same people started getting angry as to why we lost him to Bayern via Hoffenheim. I think Arsenal fans need to realise 2… Read more »

My bad, had Nelson in mind.

Totally agree. With the very limited transfer budget that we alledgedly have either trust the talent in the Academy or invest more into it. £40mill won’t even buy 1 world class player. However the same amount invested in the Academy could produce several good players although of course there is no guarantee.

I hope the coaching staff give him a chance for next season. He’s only been held back by injuries and now he’s grown into his physique he can put all that behind him and kick on and be a real asset for our team. Just need to convince him that his future is with us. Our previous coaching set were also partly to blame for his lack of development. What concerns me is his interview with sky after the game today. Reading the transcript, he sounded as though he was already a Charlton athletic player for next season?

How the fuck do people not punctuate?

He’s had serious shoulder injuries this season too. Kept him out for a substantial period if I remember right. If the same injuries happened to a pl squad player, most of us would brand him a liability. I think he’s still growing into his physique. We should keep him with us, on that I agree. However, let’s not get on the manager or the club’s backbfor giving him a deal if he doesn’t stay fit for big parts of the next season.

He got the first shoulder injury with the Arsenal u23s and was made to play most of the game with the injury by the fuckwit manager who is no longer at the club and was replaced by Freddie. We mismanaged him and others before he Academy was upgraded and thankfully things like that will never happen again. He deserves a chance, and I’m sure our fitness coaches would be able to help him a lot.

my Polish mate said long ago he was the top young player for Polands u16s, u18s sides, injuries had stopped his development at Arsenal but because my mate was adamant he would become world class in his opinion I have followed his progress, good attitude on pitch, plays well at RB, composed at CB, slots in well at HM, give him a 3 year deal and bring him home..

Another player we must bring back to bolster the numbers in the midfield as well as the defence. And he has the potential for make it as well. We must give him the chance to prove it. If we can do it for Guendouzi we can do it for him.

I say keep him, throw him into the mix. Watch a bright young talent, at the most unforgiving position possible, in a really decent team that is weak in that specific area…watch a large contingent of fans turn on him after just a couple of mistakes. You know, the kind of mistakes required to steel and temper a great Central defender in the worlds toughest league on them. I wish we had a fan base that cherished and appreciated this process vs throwing them into the trash heap so quickly when things get tough. Imagine being the manager knowing it… Read more »

Bring him back this summer right quick.

Hopefully, the under-21 Euros don’t take away too much of his preseason development. I’d like to see him get some games in to demonstrate his talent. Then we all can see where he sits at PL level.