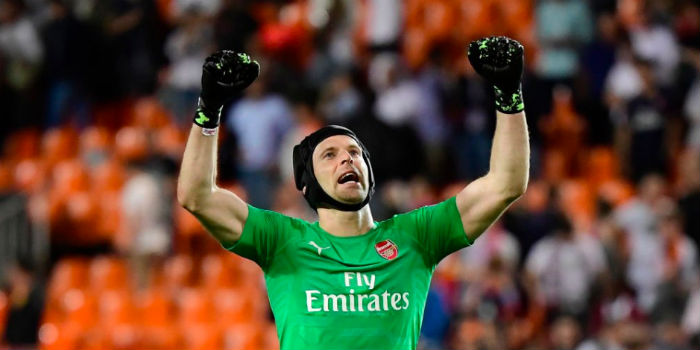 Petr Cech says must-win games bring the best out of Arsenal and that his teammates have too often paid the price for taking their foot off the gas when the pressure hasn’t been so high.

Cech is expected to start for the Gunners against his old club in what will be his final appearance as a player. According to various sources, the 37-year-old will then return to Stamford Bridge in a sporting director position. Whether such rumours influence Unai Emery’s selection remains to be seen, although he does have first choice keeper Bernd Leno waiting in the wings.

There’s no suggestion that Cech is anything other than completely determined to beat the Blues and he’s eager for everyone in the squad to realise the magnitude of the Europa League final because it’s traditionally been the best way to get a decent performance out of them.

“I feel that when Arsenal need to win, we win,” he told the Evening Standard. “You go to Athens in the last Champions League group game [of 2015] needing to win 2-0 and you win 3-0. No matter where, we win, because that fire was right behind us as we had to really win. The pressure was what was pushing us.

“I completely disagree with people who say, ‘When you pressure comes, [you don’t win]’. No. I think we lose points where there is not enough pressure. So, we went to Everton [on April 7]. You know you win, you go third… you lose, you stay fourth. We lost. That week with Wolves [losing at Molineux, either side of defeats to Crystal Palace and Leicester], it was the same situation.

“There was always a cushion, there was always, ‘It is not such a disaster’. We should probably create more pressure on everybody because that would give people more to think about.

“We went to Napoli [in the quarter-finals] and everybody says, ‘Oh, you are rubbish away, they are brilliant at home’. We win 2-0, and then you go, ‘How do you explain that?’ If you are under pressure and you can’t perform, you lose that game. But we didn’t because the pressure was so high. You know you lose, you are out. You lose 3-1 at Rennes [in the last 16, first leg], you have to win at home: you win. The semi-final? We win. So, the examples are there.”

You might easily suggest that missing the opportunity to beat Palace and Brighton at home and the defeats to Everton, Wolves and Leicester were all examples of us fluffing our lines when the pressure was cranked up. But we kind of see what Petr means.

Bench this Chelsea legend. He means nothing to Arsenal, I think any sensible fan knows that. Who gives a crap if it’s his last ever game? He made his legend at Chelsea, not Arsenal, he’s always been one of them. If Emery plays him it’ll confirm what we all know about him, and it’ll confirm what we all know about Arsenal- too nice, not ruthless enough.

Absolutely criminal if he plays. He’s a Chelsea legend and a Chelsea employee soon. Play Leno.

Additionally Leno is the better keeper and we all know who we’d want if it goes to penalties.

if Cech starts they should save a sub to put Leno in net in case of penalties.

Chelsea fans know he’s finished and that he’ll be an integral part of their club soon so they’re absolutely praying he starts. Actually ridiculous we’re considering starting Cech. Shouldn’t even be a discussion.

Knowing about how diifficult it was for Unai to decide who of Neymar or Cavani should take the PKs, the man must be facing the dilemma of his life right now, lool.

That has nothing to do with Arsenal however- he is not an Arsenal legend, and has not exactly been brilliant for us either. He’s Chelsea through and through. We need to man up as a club.

Only Arsenal legends must play!!

I’m thinking Henry and the ghost of Cliff Bastin upfront.

If he wins us the Europa league he’ll be an Arsenal legend in my eyes.

I wish this was twitter where I could mute or block you!

Mmmm, there might be on or two other angles to look at things, Jai….

Not going to go down the same road as Jai as I think that was a tad disrespectful. But honestly, can someone give me ONE valid reason as to why Cech should start over Leno? Just one. And before anyone says it, the fact that i. he’s played in all of the Europa League games so far and ii. it’s (potentially) his last game for us are NOT valid reasons

He’s played in a Champions League final. Saved a penalty in extra time. And two in the shootout.

Not saying that makes the choice obvious. The opposite, in fact.

Lol. Ok I’ll give you that one!

From a footballing perspective, not much, save his experience in European competitions and finals. It does potentially set a poor precedent though if he has been promised the European games at the start of the season and then the manager goes back on it now. It might damage the trust other players have in the coach and the club to keep their word. It is a conversation that should have happened openly at the start of the campaign with both keepers, that the number 1 would start if we got to the final.

This is precisely it. Leno is a better keeper than Cech, but the gulf is not massive unlike if we were to play our youth team. We should start Cech because he’s been promised the Europa League games, because as a true professional he’s been mentally preparing himself for the final the past month, because the rest of the team has been mentally preparing themselves for Cech in goal. It’s a question of trust. When you tell someone you trust them, and they haven’t done anything to make you doubt your trust, you don’t renege. If I were to find… Read more »

Please let’s stop saying “promised”! Nothing was promised. It’s just been an unofficial policy that the second keeper starts in the cups. Leno was the second keeper at a point and now Cech is. However, this is a final that is part of our number 1 objective, which is to get back into the Champions League…so why not start the number 1 keeper? Put sentiment aside for a second (I know football is a lot of sentiment though) but we need to be more ruthless as a club. It will kill me to see Cech in goal tomorrow…have to stop… Read more »

Who says that hasn’t happened?

He’s still more commanding in the box than Leno. That’ll be a useful asset if they plonk Giroud up top for the last 30.

Giroud even is likely to start, Sean.

I mean come on. Just bench him, and play the better goalkeeper. It’s not a difficult decision. He’s done his absolute best to create conflicts of interests in as many ways as he can

There has been a bit of unrest in the enemy camp with Sarri’s future up for grabs so hopefully we can do the business and exploit this. They will come at us so we will have opportunity to pick them apart more on the counter. The strikers (Auba and Laca) will have to be razor sharp with their opportunities. We know our defense does not do well under sustained duress so we need to utilise attack as the best form of defense. Also concerted pressure/pressing high up better with both strikers but supported by the rest of the team. In… Read more »

…and yes we do need to win this. Its a must win where Chelsea are already qualified.

It will have significant impact on transfer budget not to mention add something to Unai’s first season which would otherwise be tepid at best.

No issue with Cech starting, he’s a consummate professional.

Wolves without Mustafi and we still lost.

Mustafi played well next match against Leicester putting in a critical block or two.

The issue has never been Mustafi. That is just simple minded people obfuscating their own heads.

The issue is we need to play a back 3. That’s what we did away at Napoli which got us back on track.

It afforded us better ability to deploy our wingbacks which in turn supports the attack better (High press and wide areas).

I like him BUT he’s leaving and he has won a European cup before. Why not give Leno the opportunity to play in a final and potentially get whatever psychological benefits come from being one of the players in an important win?

Doing ‘right’ by Cech would be doing wrong to the Arsenal. Not starting Leno would be part of the lack of ruthlessness I think has caused us to make many mistakes regarding contracts, transfers etc.

That’s where we are as a club, and we’ve created a prototype of fan not seen at other “top” clubs where niceness matters above everything else

That’s your concern about AFC? We have fans who care too much about ‘nicesness’?? I’d tell you to go fuck yourself, but I’m too nice.

Chuck your prawn sandwich at him

But it was Cech against Napoli home&away and Valencia home&away so what’s up??
Also, at the end of the day it is the coaches’ decision not the club’s

For some reason people want to overlook the fact that Cech’s saves in the Rennes game away kept us in this competition and as you rightly say he played in the Napoli and Valencia game…but hey let’s not silly little things like that affect our opinion on who should start!