Arseblog News – the Arsenal news site
Home Matches and team news Europa League Emery on Cech: How can we not believe in him?
Facebook
Twitter
WhatsApp
ReddIt 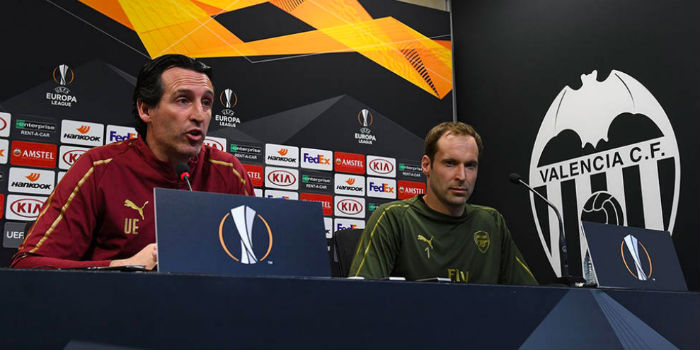 Unai Emery says he will tell the players his team before letting slip any of his selection decisions to the media, after he was pressed about who would start in goal tomorrow night.

This is a game Petr Cech views as a kind of destiny, his current club against his former club in the last match of his professional career, while there’s also a good case to be made for starting your number 1 – Bernd Leno – in a game of his importance.

The German insisted he’d be up for it if selected, but although the Arsenal boss was keeping his cards close to his chest, it sounds as if he has full faith the keeper who has played throughout the Europa League knockout rounds and helped us reach the final.

“The first eleven for tomorrow, I want to tell the players first,” he said.

“I can speak about Cech a lot, but above all he’s a great man, his behaviour is amazing in his year here with me.

“I think he deserves trust in him, not because I’m speaking to you here, but because his career says to us he’s a gentleman.

“Tomorrow he can start or not start, I am going to decide. But both for him is with respect.

“And really, how can we not believe in him?”

Cech himself spoke earlier, saying he believes the team can rise to the big occasion.

“No matter where, we win, because that fire was right behind us as we had to really win.

“The pressure was what was pushing us. We went to Napoliand everybody says, ‘Oh, you are rubbish away, they are brilliant at home’. We win 2-0, and then you go, ‘How do you explain that?’

“If you are under pressure and you can’t perform, you lose that game. But we didn’t because the pressure was so high.

“So, the examples are there.”

Let’s hope there’s another one tomorrow then!

Crumbs the nerves are starting to jangle!!! It feels like a year ago when we last played!!! COYG

Not sure who I would start but Cech’s integrity would not play a part in the decision, he is a true person dedicated to his team.

“Didn’t even bring my gloves”

Regardless of how we’ve felt about this season, it’s time to come together for this big game! COYG!!

Start Cech. I think the small difference in quality between him and Leno will be overwhelmed by the teams desire to win for Petr in his last match. It will just give the squad one more reason to be massively up for it.

BTW I wouldn’t be surprised if Chelsea really aren’t up for it. They’ve qualified for the champions league, the travel, the shambolic mess UEFA has made of this final, their injuries, the season feeling like it’s already been over a week etc… Not unreasonable of them really. At least I hope so.

I can’t let myself believe that Chelsea won’t be up for it…but what I have to believe is that our players will be. Some of the performances in the League suggested to me that winning a trophy has always meant more to them than just finishing 4th. Despite some of our obvious deficiencies we have beat teams that have now qualified for the Champions League (Valencia and Napoli) and won cups in Spain and France (Rennes); Valencia beat the mighty Barcelona, so we have no excuses and based on that alone we really should be in the Champions League. Anyway,… Read more »

Sure, this is a huge moment for Cech, as he calls curtains on what can only be described as a n illustrious career. However, for a game of such magnitude sentimentality should go out of the window. You choose your best keeper for a European Final simple as that. No doubt Cech being the professional he is will give his 100% even against Chelsea but I would much rather prefer Leno’s calm distribution from the back from Cech’s clearances to Auba who is not the greatest header of the ball. For a game that will literally decide our transfer policy… Read more »

Biggest game of the season… play your no1. Sorry Petr this isn’t a time for sentiment

Totally agree. Play your no1, if we are up 3-0 into the last 5min of the game, send Cech in to get his well deserved parting ovation

Cech is our No. 1….check the back of his shirt!

I always thought it would be better to play Leno in the final, but I failed to realise something very important about Cech. Cech has been very vocal to to the press and to the general public, including us as fans about his desire to win the Europa League, way before it was confirmed to be against Chelsea in the final. Seeing how he has behaved all season and his desire to show the women support, I feel as though he has been a big motivator in the dressing room for the guys. it wouldn’t surprise me at all if… Read more »

It’s a recent Arsenal tradition to play a keeper in a cup final who’s about to leave soon, starting with Fabianski, Szczesny and Ospina (1 year later).
And we won all these finals.

Start Cech!
Sometimes rationale doesn’t work how you think it should.

Leno me, I’ll be your friend
Reply to  Gana

We often underestimate the importance to the keeper themselves. A shambolic showing and they’ve thoroughly tarnished their entire time with us, whereas play well (and hopefully win!) and they’ve instantly made our history books. As it’s their final game it really can make or break a legacy, so it’s possible to argue that the outgoing keeper is more likely to produce a sublime performance.
Personally I’m undecided still (it’s not a worry either way), but I really like your point, Gana!

Niko Kovac played a DFB-Pokal final against Bayern; Frenkie de Jong was willing to play a UCL final against Barcelona. I think Cech will be fine. Plus the Europa League is his competition. If you offer the second string goalkeeper a competition to be his own then the respectful thing to do is let him keep it notwithstanding dips in form or any other such setbacks.

Best of luck to whoever is between the sticks.

I’ll back whoever starts in goal, both are good enough. One concern though is that Chelsea do something to ‘celebrate’ his contribution to football just before kick off, I don’t know what but I could imagine them trying to show their appreciation too early – basically as an underhand way of unsettling us, like the ‘Cech to be Chelsea GK coach’ news that came out at an inappropriate time. Hopefully Chelsea will take a note from our book and act with class. Said it before, but I desperately need it to be true, please let us be the only London-team… Read more »

Too many ridiculous people.

Cech has got us to the finals of this cup, he has every right to start.

He is a professional.

Absurd to suggest he won’t do well bc of post career back with Chelsea again.

He will want to bow out with a trophy.

He did his job twice against Napoli and twice against Valencia, no reason he can’t do it again against Chelsea – they aren’t exactly world-beaters and if we show up and play like we’re supposed to, I can’t see the final outcome depending on our keeper. It’s not like Cech hasn’t saved our assess a few times this year.

Cech seems to be well liked and hugely respected by his teammates, and it doesn’t really matter what any of us think, their opinion is he one that counts. If they are happy with him, and it seems they are, then he should play.