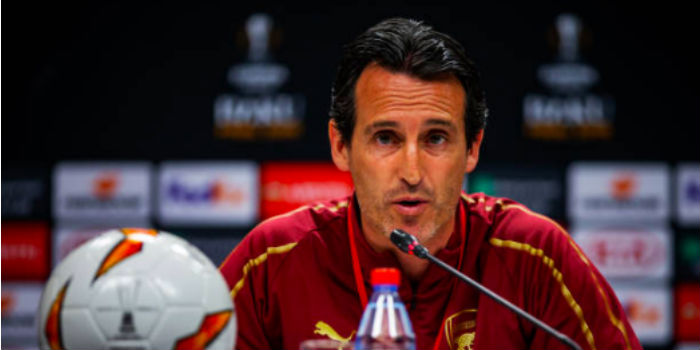 Unai Emery says the Europa League has become a much stronger competition in the last 10 years and this season has provided a platform for Arsenal to showcase their talent to the whole continent.

Having won the trophy on three occasions with Sevilla, the boss is hoping to become the first ever coach to win the competitions four times. Should he pull it off on Wednesday night, he’ll also have achieved his ambition for his first season in charge at the Emirates; securing Champions League qualification.

Facing the media in Baku ahead of tomorrow’s night’s match, the boss reflected on his experience of Europe’s second-favourite club tournament.

“I started playing in this Europa League when its name was UEFA Cup,” he said. “And in 10 years it improved a lot.

“When UEFA’s direction decided to give the winner the possibility to play Champions League three years ago, I think it is also one important step for the teams. Above all, for example in the domestic competition like in England, because the top four is really hard to achieve with a lot of important teams, in Spain is the same and maybe in Germany and Italy.

“For example, Lazio and Milan are out of the next Champions League. The Europa League improved a lot I think in the last 10 years. One, the decision from UEFA to give the possibility to play the Champions League if you win, I think it helps it to improve more.

“I think now and in the last years with Sevilla, but in the last years for example Atletico Madrid, Olympique de Marseille and also Manchester United. I think now a lot of teams, and an example is also this year with Chelsea and Arsenal, they are playing this final with great teams in the world.

“To battle the best teams, like we battled Napoli, we battled Valencia, and now the final and the possibility to battle Chelsea, it gave us this challenge in an important way and to show our capacity in this competition.”

Given Chelsea have already secured a Champions League place by finishing third in the Premier League, there have been suggestions that the West London club may lack the same determination to win as Emery’s men. The Spaniard was quick to play down such chatter.

“I think not,” he said. “Because the first thing is, in Chelsea, they are in the same idea. Chelsea won this competition with Rafa Benitez and in this moment there is not the possibility for home to go from Europa League to Champions League.

I enjoyed this year’s edition of the Europa League. There was a sense of solidarity with the team, and more positivity that we can turn games to our favor – which we did.

I want to feel the same with Champions League next year.
COYG!

The group stages we’re awful, but the knockout stages we’re much more interesting this time around, going down to 10 against Rennes made the second leg interesting, also having a deficit to reverse against Bate put something on the return leg, and we definitely got the more interesting side of the draw in the quarters and semi with Napoli and Valencia.

We need to win tomorrow to give Emery some extra leg room to work, he’s got a massive job to do, and I really don’t want us to end up with a revolving door of managers.

And beating Napoli and Valencia home and away can’t be sniffed at. COYG

His full transcript here https://www.arsenal.com/news/emerys-baku-press-conference-full-transcript I like him more and more. COYG!

Arsenal will play 3-5-2 with Kola and Ainsley blocking Chelsea’s supply lines on the wings. Özil will shine and Lacazette will make a hat trick.

The cup is at the Emirates after tonight’s hostilities in Baku.