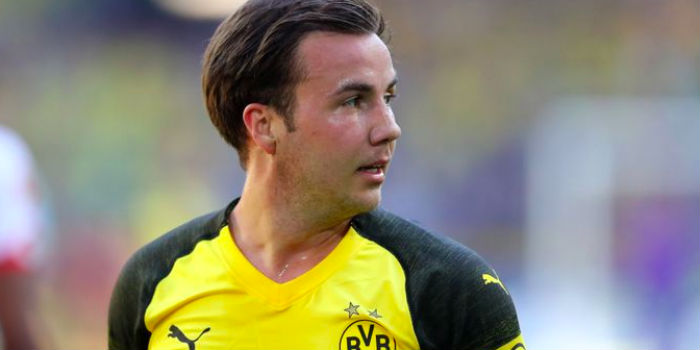 According to a couple of reports in Germany, Mario Gotze is talking to Arsenal about a possible summer move as he deliberates whether to sign an extension at Borussia Dortmund.

The 26-year-old, most famous for scoring the goal that won Germany the World Cup in 2014, will be out of contract at the Westfalenstadion in 2020 and has been in talks about a new deal.

It appears that Dortmund are unwilling to renew on the lucrative terms the midfielder currently enjoys and that he’s started to look elsewhere.

Links with Gotze stretch back to 2011 when Arsene Wenger was keeping tabs on the promising teenager during his first spell at Dortmund. He ended up moving to Bayern Munich for three seasons – a decision he later said he regrets – before making a return ‘home’ in 2016.

He hasn’t had much luck with injuries since the World Cup in Brazil. A bad hamstring injury at the Allianz Arena was followed in 2017 by a diagnosis of a rare muscle disorder, myopathy. He didn’t play for Dortmund for the best part of half a year and he subsequently lost his place in the national team.

In the last 12 months, he’s been back playing regularly (seven goals and seven assists in 34 appearances) but it’s probably fair to say that he’s not quite hit the heights that might have been expected of him when he burst through the ranks. You know, that World Cup-winning goal aside.

It’s hard to tell if there’s any truth to this story. It could be a play on the part of the agent to squeeze more money from Dortmund, it could be that we found a loose page of Sven Mislintat’s little black book or it could be absolute guff. It’s very hard to tell at the moment. That said, the player did post what reads like a farewell message to the Dortmund fans in a recent article on The Players’ Tribune.

Obviously, we’re losing Aaron Ramsey this summer and there are suggestions that we’d be open to letting Mesut Ozil and Henrikh Mkhitaryan depart, so it’s not beyond the realms of possibility that we’re sniffing around.

In just over 24 hours time it’ll be easier to assess which fork in the road we’ll take in the transfer market. One way, powered by Champions League riches, should see us compete for some household names while also trying to snap up promising youngsters. The other, due to another year in the Europa League, could see us focus on the latter.

We asked our resident BVB expert Lewis Ambrose for this thoughts on the rumours. This is what he had to say:

I find it really hard to believe. I know BVB have been trying hard to get a new contract done, the issue there is he’s already the second highest earner (and earning more than he probably should) so it strikes me as the agent trying to get the deal they want. I guess anything can happen. But especially when we’re talking about Arsenal being tighter in the wage bill, it’s a weird link. And not from the best source.

Dortmund’s stretcher is the Mario cart.

He has slowly improved throughout the season, but I feel he has lost a yard of pace and will struggle in the premier league.

Quality over running fast. Look at Paul Scholes for example.

God is a Gooner
Reply to  Jay Beattie

Ha! The only example scholes set was how not to stay on your feet.

Rob67
Reply to  God is a Gooner

The fact that 15 people have thumbed this up is a truly terrible indictment of the sort of thoughtlessness that message boards like this, can show. Scholes is just about the most decorated footballer of modern times. Ferguson said that he was the one player above all others – including Keen and Beckham – who was indispensable to the success of that Utd side. What was it now – 13 titles ; 5 FA cups ; 2 Champions League titles ? As someone said of someone else – ‘We don’t want his sort round here’. And frankly there’s very little… Read more »

Paul Scholes is a garbage person and has proven this on many occasions, both on and off the pitch. He was also a different type of player to what goetze is, so why even bring him up when discussing an unlikely transfer rumor?

When I have seen him play, he has been exciting to watch. And the thought of him re-connecting with Auba and Mkhy certainly appeals. But because of the injuries which have plagued him, I’d hate to buy him to see him only play half a season.

Well, Mikitikitaryan hasn’t really “re-connected” with Auba yet. Had had high hopes for that, but it never really seemed to happen

Henrik was bought by Dortmund to replace the then Munich bound Mario Gotze.

How ironic would it be then if we sell Henrik to get Gotze. A vicious cycle

Maybe an exchange..Henrik for Gotze ?

Amazing that Götze is still just 26 and has been through so much being in a German World Cup winning team and also his subsequent health issues.. let’s see how this pans out, the man does not lack quality that’s for sure but how he cuts it at the PL is what’s to be seen

A realistic option only if we intend to loan out Emile Smith Rowe for the entire season.

And where is the poo meter when you need it? Is it only for Andrew M to use and not Andrew A?

The last thing we need is another lightweight German who’s lost his hunger and drive, Gotze under Klopp at Dortmund looked like he was going to hit some dizzying heights as a player, but looks like he’s seriously lost his way, Pep didn’t fancy him, and they weren’t exactly lining up around the block when he left Bayern, a talented player no doubt, but so is Mkhitaryan. What we need is 2x fast, aggressive and relentless wide players who can put the ball in the back of the net, Emery has talked twice now about needing both technique+physicality, and for… Read more »

I’d rather we didn’t sign another player who will spend half a season out every year – on a high wage too.

God is a Gooner
Reply to  Richard

Please, not another lightweight, injury prone coaster on 200k a week.

He is still 26? It seems like he has been playing for 15 years

His transfer back to Bvb included a time travel clause

For once and last… you have to get used to the fact Özil stays. Sorry…

I couldn’t give two shits

Not any more, there was a time when he would have been an amazing signing, but he’s not the player he was and I’m sure we could do better.

If he can’t stay fit in the Bundesliga, how the fuck is he going to last a Premiere League season? Doubt he’d make it through a Burnley match.

Wenger would have said : “I Got Ze player”.
I grab my coat.

I have little interest in looking at the past; guys like Gotze or Boateng.
I’d rather look to the future, through the likes of ESR or Beilik.

Splunking stupid wages on the past is what’s got us here. Besides, it was clear by the Execs that reducing our overall squad age, adding youth & energy, and reducing the wage bill is the plan, and Gotze, though not that old, doesn’t tick all those boxes.

He doesn’t seem like an Emery type of player. Emery likes to have more steel in his men

They are going to make a movie about our scouts who are watching him, called “The Men Who Stare at Gotze.”

Can we start the poometer again this Summer?

He’s an expert in the same way that journalists who cover the Premier League are experts of it.

8 years ago , would’ve been exciting. Sadly , his story has been similar to our jack , a promise unfulfilled by injuries and bad luck.

Its about time Arsenal get some xl md and defenders. Wenger bought PV 4 .
After that he bought technical players forgetting the epl is a jungle where
might reigns over silky skills.

It’s nonsense and we don’t need or want him.

Nooooooo! We do not need this fat boy on our team.

Would fit in nicely alongside Gourcuff

Mate, that man was one of the most graceful footballers I’ve ever seen! Insane skill and technique and to top it off, I remember him embarrassing a Chelsea team of Terry, Lampard, Anelka and Ivanovich in a CL game way way back. Think they drew the game though.

We have some great young prospects in his position(s) – Nelson, Smith-Rowe, Willock, Amaechi, Saka etc. If we’re going to complicate their route to the 1st team with expensive signings, it has to be for players who justify that by close as guarantee a significant improvement to our 1st xi as possible. We’ve kept around too many injury/form risks like Gotze and limited talents like Fraser to justify taking a punt on more. Open the door for our academy players and new young high talent signings to take up the squad positions. It will save funds for top quality starting… Read more »

Hopefully the days of us taking chances on injury prone players and those who haven’t fulfilled their potential are over. If Dortmund want to renew him on reduced terms that tells you everything you need to know