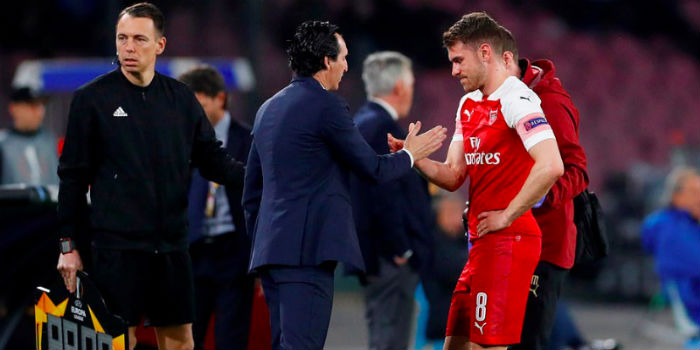 The midfielder came on at half time against Everton on 7 April, played a full 90 minutes in the 2-0 home win over Napoli four days later and then completed 68 minutes in the win at Watford before starting again in the Stadio San Paolo in Naples.

The game in Italy proved to be one too far for Ramsey’s body which sustained a hamstring problem that ended his season.

Speaking to the Evening Standard on the eve of the Europa League final, Emery admits he’s frustrated that he didn’t better manage the Juventus-bound player.

“Now we can speak about that,” he said. “Sometimes you cannot play every match with the same players because some players can be a risk for injury. When he was playing against Napoli, he was injured.

“The Monday before we played Watford, we won 1-0, and I prefer he didn’t play. I spoke with him. “Aaron, we are playing a lot of matches now. I think you need to rest one match.’

Emery also reflected on the journey he’s been on with Ramsey this season. When the Spaniard moved to the Emirates the club were doing their best to retain the 28-year-old’s services. Not long after, Raul Sanllehi and Vinai Venkatesham pulled the plug on negotiations leaving the player to leave on a free.

It appears that during that period of uncertainty, the boss didn’t feel that he was getting the best from Ramsey, hence why the midfielder spent a lot of time on the bench. When Juventus sorted him out, it all changed.

“Really, his process this year is a strange process, a strange way,” said Emery. “At the beginning, he started the pre-season very excited and well. I said: “Whoa, looking at him close…whoa.”

While Ramsey won’t be part of the squad for tomorrow night’s final, Emery has said that he could be tempted to channel the emotion surrounding the imminent departure of the long-standing Gunner, as well as those of Petr Cech and Danny Welbeck, in his pre-game build-up.

“It will be a good opportunity, a good idea,” he told the Mirror. “For the final, we want to do something important with some players: Petr Cech [who is retiring this summer]. Danny Welbeck [leaving at the end of his contract]. Aaron also. We want to touch something emotional for this match.”

Hopefully Emery learnt a lesson here. Trust the emdical staff and your own judgement ahead of the player. Of course the player wants to play. Sheesh.
But injuries can happen at any time so even if he rested Ramsey the lad might of pulled up lame next training session or had his knee shattered by a bad tackle in the next game.

Emery got a lot of flack from fans (and podcasts) for his use of rotation and not having a “settled squad” which I never understood. We are a club with a historically bad record of acute and chronic injuries caused by overuse, and we moaned for years about Wengers lack of squad rotation, but instantly gave Emery flack for doing what we wanted. It’s also easily overlooked that outside of our long term absentees, this season has probably been our best in terms of general injuries and player availability in a decade, and that’s largely down to Emery’s management of… Read more »

Medical staff aren’t magicians – there’s no machine that can tell a coach when a player feels a twinge, or how sore his ligaments/tendons are. You need honest player feedback for that. We needed Ramsey to manage himself better and he wasn’t able to do that.

100%.
And yet even when we consider how injury prone Rambo is, I’d say Emery managed him well enough to get so much out of him for so long.

Blogs: Fan of Arsenal, Aaron Ramsey and most everything to do with Aaron Ramsey, and tying Aaron Ramsey into nearly every article on this blog even though he’s left the club. When will Juveblog launch?

Should have became our next captain 🙁

Well, I don’t believe part of this: “It appears that during that period of uncertainty, the boss didn’t feel that he was getting the best from Ramsey, hence why the midfielder spent a lot of time on the bench.”

I don’t think that’s why Ramsey was benched; I think it was an attempt to put pressure on him during contract negotiations. (And, really, I don’t believe it was Emery’s decision either.)

While the press are all over the Cech angle of the final, and i appreciate the comments about ramsey, we should be putting our best performance in for koscielny.