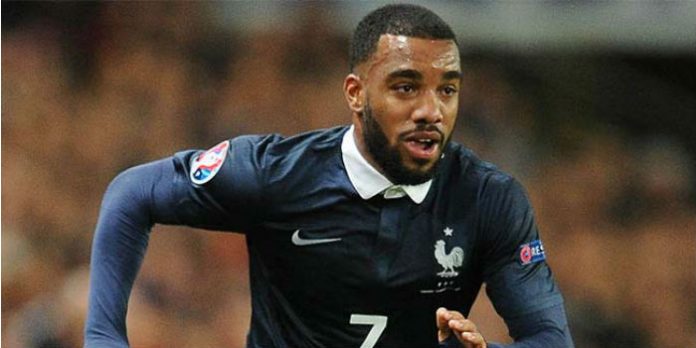 Didier Deschamps doesn’t like Alex Lacazette. We have to assume that at this point because once again the France head coach has decided to overlook our striker.

Laca was left out of the squad for the World Cup last year and hasn’t played for his country since November 2017 when he scored a brace in a friendly against Germany.

Granted, he was injured for a portion of that period at the tail-end of last season and Les Bleus are blessed with some other reasonably good forwards, but still, you’d imagine Laca’s 13 goals and 10 assists this season might have caught Didier’s imagination.

The seven attackers who have made the cut, include Wissam Ben Yedder (Seville), Kingsley Coman (Bayern), Olivier Giroud (Chelsea), Antoine Griezmann (Atletico Madrid), Thomas Lemar (Atletico Madrid), Kylian Mbappe (PSG) and Florian Thauvin (Marseille). There are actually no Arsenal players in the squad, something we’re still getting used to after years of Gallic Gunners.

Asked about the situation in his press conference this afternoon, Deschamps said: “There is no reason why we won’t seem him again soon. I had a difficult choice to make. [Ben Yedder] has scored an enormous amount of goals this season.”

France have three upcoming fixtures. A friendly with Bolivia a couple of days after our Europa League final. That’s followed by two Euro 2020 qualifier with Turkey on 8 June and Andorra three days later.

By that point, Lacazette and Aubameyang will have been photographed yachting about the Mediterranean with the Europa League trophy. Well, we hope so anyway…

Arteta: Winning gets the handbrake off

Arteta: Lacazette is full of confidence

None of those players listed are better finishers then Laca IMO. Some may be better players, but none of them close to our Alex when it comes to finishing

Erm, you don’t think Mbappe and Griezman are better finishers?

FYI on the most recent stats I could find (Jan for Lacca) at that point he had a 21.6% shot conversion rate, which is higher than the expected for top strikers (20%).

I can’t find the latest Mbappe one, but his previous season had him at 32.4%, the best out of everyone in Europe. Considering he’s scored more this season, I doubt it’s drastically reduced (if not improved).

So yeah I love our Lacca, but to say Mbappe isn’t a better finisher is….interesting.

You’ll probably get negged down like I did for pointing those two out.

Look, I like Lacazette a lot, I think he’s an excellent striker. But if you told people in real life that he’s a better finisher than Griezmann and Mbappe, you’ll get laughed out of the room. I do question him being left out in favour of Ben Yedder, mind.

What a clown dechamps is. Feel bad for laca tbh, I’m sure he’s a proud Frenchman that wants to represent his country. However, him having the summer off will be good for arsenal, hopefully the Barca rumours are just his agent trying to get his client a lucrative contract, because he deserves it.

When he was the fifth of four strikers in the World Cup squad I kind of got it, but now it seems a direct snub.
Still, as long as it doesn’t affect his confidence I’m all for him having a rest

Deschamps is pushing to get Laca say something bad about him so that he bans him completely.

Makes no sense. Deschamps and Laca must have bad blood, no other rational cause for this.

I would have picked Laca over Lemar, Coman (I guess they wanted a winger), Thauvin, and Yedder.

Good for Arsenal, Laca will be hungry and ready to prove them wrong.

To be fair to Deschamps, Ben Yedder has nearly 30 goals this year. I like Lacazette, but given those stats, I would have opted for the same.

When you win a WC you’re king but Deschamps wins ugly. I remember how France was dominanted by Croatia for 55 mn. They neeed a guy like Wenger to give their football an identity with the quality they have. Deschamps will go coach a team to play catenaccio in Italy.

Hmm.. I think they’ll settle for “winning ugly” and have their world cup.

And Giroud that scored zero goal at the WC?

Since 2006, Fabregas and Van persie ate the only players I can think of who were a mainstay of their respective national teams.

So Arsenal’s record of sending players to the major national squads has been quite disastrous.

“… for long now ….” Sorry, but that ‘s complete rubbish. How quickly some forget. From about 2005 – about 2013/14, the Int’l breaks were always the worst. Players coming back banged up, with knocks, jet lagged, not ready for weekend matches. Some times the numbers were staggering: Fabregas, Rosicky, Hleb, Flamini, RVP, Song, Adebayor (remember him?) & Gallas – all had national duty, regularly. As did Walcott, Sagna, Gibbs, Clichy, Ramsey, Nasri, Wilshere, Kos, Arshavin, Vermalin, Sczny, Sanchez, Torriera, Giroud, Welbz … the list goes on. Thats off the top of my head. Enough with the false narrative. Seems… Read more »

I think, in fairness to him, he’s highlighting it as a potential correlation for the decline in quality in our squads.

Back then our players weren’t just international players, they were the core of their respective national teams. Now? Most can’t even get in, even though we’ve spent loads more on our squad.

That does say something, no?

I was talking about our players, only from major nations (which I made it a point to mention above)

To add to my point, fact that – we have zero number of players from the golden generations of Belgium, did not have a single player French WC winning squad and had only one player (Cesc) in the Spain’s golden generation of 2008-2012 – says a lot about the quality of our squad.

Not quite sure what’s up with this thread today.
It’s like if you don’t agree that Lacca is a better finisher than Mbappe (contrary to the stats), you get down-voted.

It was obvious your post was about the general decline of the quality of our teams in respective to our reduced selection in the national team. No one is saying we’re not happy our players get a rest, but that our quality has declines despite more money (evidenced by our league positions).

Not quite sure what that warrants heavy negs too.

Ozil was in the World Cup winning squad and was German player of the year 5 times so I think he must be included.

This is good news for Arsenal. Laca gets to rest this summer and stay injury free. Why risk our player of the season for BS international games. Laca please enjoy your summer, you earned it!!

Lacazette is the best French international striker in the world now and deschamp is a fool.

france’s loss is our gain!

My only concern about seeing this as “good news” like others do is the potential risk of Lacca becoming unsettled and maybe wanting a move to Atleti, if it comes true, as it’s a greater platform and will be the main man again, which in turn improves his chances of getting into the national team (a team capable of winning more).

It’s a fair concern to have.

So you are saying Lacazette is not that good in your other comments while saying we should be concerned about him leaving us so he could get into France team. by now it is quite obvious that you like to spread negativity about Arsenal , while knowing the statistics actual Arsenal fans like to praise Lacazette and say he is the best France striker and it doesn’t matter if it is objectively true or not because unlike other France players Lacazette is an Arsenal player and our player of the season too , so fans will support him if you… Read more »

Being supportive doesn’t mean we need to be delusional. Maybe you’re happy telling yourself we have the best team in the league and the best defender like Mustafi, but I like to base my thoughts on actual reality. I mean, you literally just said “whilst knowing the statistics…” and indicating “real” Arsenal fans ignore evidence and say otherwise. It’s like Brexit all over again. FYI, just because I said Lacca isn’t a better finisher than Mbappe, doesn’t mean I think he’s “not that good”. I hope you don’t live your life with such binary terms. I even provided evidence to… Read more »

Being delusional is thinking you can actually improve a player’s ability by criticizing him on a fan site. if fans criticize a player like Mustafi it is because of the emotional outrage caused by his mistakes in games and none of those criticisms have made him a better player. So having even an ounce of that attitude against Laca just doesn’t make sense. Also i’m not British and i don’t care about Brexit but i will tell you this i don’t have the same mindset towards Football that i have towards political issues , so if you think people that… Read more »

“Being delusional is thinking you can actually improve a player’s ability by criticizing him on a fan site”. You seem to have some reading comprehension. Show me where I criticised Lacca. Go on, quote me, if you must. If can’t, then best to just stop waffling. Here are some of my “criticisms” “I love Lacca” “Lacca’s conversion rate is 21.6%, higher than the rate of top strikers (20%)” “I can understand if he’s tempted to leave if a crazy bid comes in for him” Man, I’m really laying into the poor guy, aren’t I? Or is all this because I… Read more »

That hasn’t worked for Laporte though, still being left out after joining City and doing well there.

That’s true.
Though he’s fought his way back into the starting 11 and they have just won a domestic treble. It’s not quite the same situation.

He should come back and be out third option striker for one last year. That would put things right.

No need to get sentimental, giroud is an avg striker and would not have taken us anywhere. Good we recouped something from him.

He scored something like 20-25 goals per season for us. More than Lacazette. We also miss his physicality when we need someone to break through a tough defence. Giroud was a more than average player and underrated during his time here.

Thauvin has NO place in this list and don’t tell me he is a winger and France need wingers… he is a bad player above all.

Well Laca is excellent. He truly is. But he isn’t up against Lemar or Coman or Thauvin who are versatile wingers. He is not up against Griezmann and Mbappe because they are world class institutions in the French national squad. Then you have Giroud. Now Giroud is not be a better central striker than Laca (although he does have 10 Europa League goals this season and we are stupid to lose him), but he provides something very unique that has led to success in the past. I can see sticking with him. Finally, and his only true competition, Ben Yedder… Read more »

Good. The less international football players play , the better for us. That’s the reality.

I smell a rat.