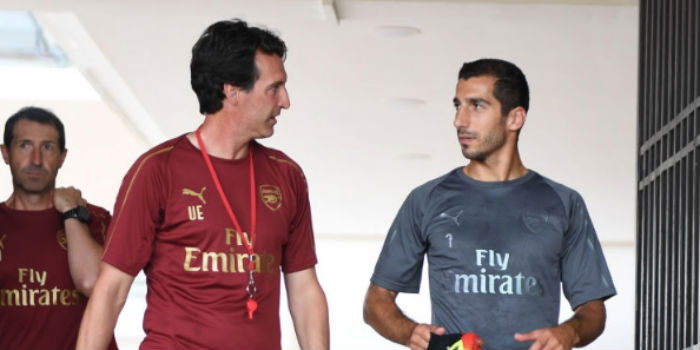 Unai Emery says he respects Henrikh Mkhitaryan’s decision to sit out Arsenal’s Europa League final with Chelsea after the player opted against travelling to host country Azerbaijan due to possible safety issues.

The Gunners released a statement this afternoon outlining their disappointment that one of our star players feels it necessary to miss such an important match because of UEFA’s decision to station the showpiece game in a country which has no diplomatic relations with Armenia due to a longstanding conflict over the disputed Nagorno-Karabakh. UEFA’s response left much to be desired.

In a press conference at London Colney eight days before the match, Emery revealed that he had hoped Mkhitaryan would be available.

“It’s bad news but we cannot do anything for this issue, it’s a very personal decision and we need to respect him,” said the Spaniard.

“I don’t understand the political problems now, but I must respect [his decision].”

While Mkhitaryan was granted a visa to enter Azerbaijan, and the country’s authorities relayed via UEFA that they’d do their utmost to protect our midfielder, it hasn’t been enough to persuade the Arsenal contingent that it’s a risk worth taking.

“I can believe [them that it’s safe], but I know and I spoke this morning with Mkhitaryan and it’s a personal decision,” added Emery.

“I respect him. He wants to play to help us by being with the team but they spoke, both him and his family, and decided not to go.”

“I came from the Basque Country and we had a big political problem that finished five or six years ago, and I can understand it is a very personal decision for his family and also thinking in their country.

“I cannot push him to come with us because I respect him. For me, it is very important if he is with us for the match to help with his quality and capacity, but this issue is not in my hands, but I respect his decision 100 per cent.”

Mkhitaryan continues to train with the first team as they prepare for the final. Arsenal and Chelsea will be allowed 12 substitutes on the bench for the final which means the Armenian’s absence does open up the chance to include another youngster or someone like Danny Welbeck, returning from injury, on the bench.

And maybe this opens it up for a Welbeck final farewell final hat trick ?

Would have liked Emery to be a bit more outspoken about UEFA’s handling of the whole situation tbh.

But to be fair, can’t be sure what communications have been exchanged behind the scenes…

Yeah, have a feeling Wenger would have gone a little more at UEFA over this and punished them with a very memorable slander — clearly they are dishonest to the federation of football, which should unite people, not divide them.

It’s a real shame Micki has to miss this game — I imagine all the players are eager to put a good spin on the season, especially those who have had a rough time with consistency.

Wenger was the manager. Emery is the coach. Maybe that’s why.

It’s pretty clear there’s a directive from the club to parrot UEFA’s “personal decision” nonsense and to downplay the whole thing. The club hierarchy has made the predictable and very cowardly decision to hang Mikhi out to dry on this one because the money is too important to risk raising a fuss about.

I think after the game will be when things get said. Hopefully if the final goes in our favour we can say our piece in the strongest terms, rather than it sounding like an excuse.

I just don’t think making it a big thing before helps anyone, not least Arsenal’s reputation for a game about to be played Infront of 60,000 locals

After the finals too late, it should have been said when the venue was announced and at every opportunity since then

I disagree. Emery has been playing a bit ignorant about the political situation since the beginning, but in my opinion I believe that is because he would struggle to communicate his thoughts completely in English. He also seems apolitical and solely wants to focus on footballing matters. It does make me miss Wenger and his philosophical input, but Emery is what we have right now. I also think the club has been pretty clear about it’s disappointment and disapproval of UEFA’s handling of the entire situation. From what I’ve seen the club hasn’t echoed the “personal decision” line in the… Read more »

I’m willing to cut Emery a lot of slack because he’s communicating in a third language, but this is a poor exercise of leadership. He could have said “I don’t know about the politics. That’s for UEFA and the club to deal with. What I know is that the team and I support Miki fully.” Instead, he makes it seem that it was Miki’s choice that he “respects” but that could have gone differently. That is the wrong message, even if — for some reason that I can’t fathom — Arsenal are trying to avoid ruffling feathers.

With the 12 substitutes…. Could we bring Nelson and Smith-Rowe back? Would they be eligible?

No. They were not included as eligible players

An awful moment in the history of football, and of our club. All parties .. except Mkitatyan .. should be ashamed of themselves.

Emery and the club’s reaction to this situation has been weak and cowardly. Meekly acquiescing to UEFA’s “personal choice” line is pathetic. I suppose it just goes to show that everyone in football, including those that run our club, only care about the money.