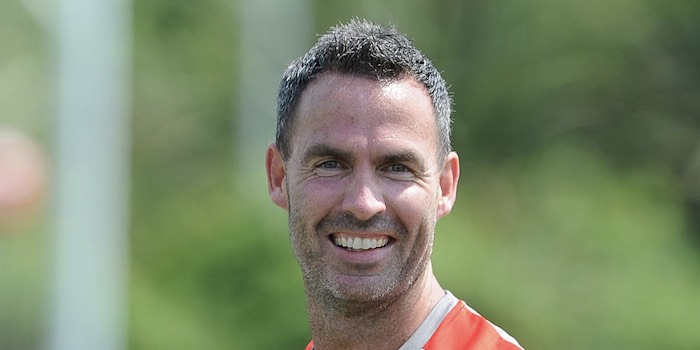 In recent weeks AC Milan were linked with a move for defender Shkodran Mustafi. That’s a move that most Arsenal fans could get behind.

However, it seems that Ivan Gazidis has gone behind the scenes to poach Shad Forsythe, the highly-rated American who is currently the club’s Head of Athletic Performance Enhancement.

Shad Forsythe's wife has posted a picture of her husband at #CasaMilan (AC Milan's sport centre). Shad has been linked with a move to AC Milan recently and it *seems* his departure is imminent. pic.twitter.com/79djsTO1Cm

Forsythe was pictured at Milan’s sporting centre, lending credence to reports that he’ll be departing North London this summer.

He would be the second Arsenal staff member to join the baldy bollocks in Italy, we can’t remember who the first one but he was some kind of executive bloke.

The 45 year old was brought to the club from the German national team set-up after the World Cup in 2014, but has perhaps been somewhat marginalised by the arrival of Australian Darren Burgess.

In short though, Gazidis can go stick a broom up his bum.

“we can’t remember who the first one but he was some kind of executive bloke.”

His name was James and he’s now Milan’s Chief of Staff. Good guy, made some good idea on the corporate side Innovation), but so far was handled badly within arsenal.

Shad also makes sense. Never quite understood his role once Darren came in.

Didn’t gazidis bring both of them in? Wouldn’t Forsyth’s think gazidis screwed him last time over by bringing in Darren?

we’re talking about people selling their labour to the highest bidder. it doesn’t matter if the bidder let me down in the past, especially if there are only a handful of bidders who can bid high

If that bald cunt likes everyone at our club so much, why didn’t he just stay?

Because he wasn’t respected. He wanted Arteta but he was overvoiced by Sanllehi and co. He left because of that. He was also the one who wanted to sign Ramsey.

Oh dear, does that mean Ivan’s not going to poach Emery?

Interesting!
I thought Raul was brought by Gazidis?

You can take Mustafi, Mkhitaryan and Ozil with you too

Well our performances aren’t exactly high at the moment…

As i watched last nights final, i kept hearing the commentator mention how the Arsenal team had outrun all the other teams in the PL in regards to distance covered during the season…..So i guess he can take that to Milan as his achievement. As a fan, am more inclined to see results/honors than statistics that matter less.

I remember an ex player saying we had people who made runs into positions where they knew they wouldn’t get the ball but improved their stats. Also we have done a lot of running just chasing the ball being passed around us.

Look at stats for last night and the key differences were cross success, tackles attempted., tackles won and shots on target. That’s where we need improvement.

Not sure if he will be missed because I am not sure what his results were.

We were so so when he came and are so so as he leaves.

He brought Wilshere back after one of the endless injuries, that’s another achivement.

If only Ivan could poach our owner over to Milan…

I can live with that.

Surely we when we allowed him to leave his gardening leave early, we put a clause in his contract stopping him from stealing any of our backroom staff?

If he wants Chad? Then he has to take Ozil and Mustafi as well

Sounds a bit shady to me

Running a club based on stats is suicide. Seems we are buying players based on some very one dimensional statistics. In order to justify the word ‘cheap’ then hope that we can improve a couple of stats here and there to increase their individual asset value rather than actual footballing value as a whole.

If only Arsenal had hired Klopp when he was available…

Those who complained about Gazidis…at least he has a concerted plan of action and we had clear direction when he (and Wenger) were in charge. I’m not sure where we are heading currently. Between Vinnai and Raul, we still have yet to see a viable and experienced replacement for Mslintat. If we don’t get the owner to understand that the brand of the club is under threat and he needs to spend a little to make the difference and keep us competitive in market beond the limits of the self sustaining model, we will go out with no action plan,… Read more »

Arsenal fans don’t think. Ivan will take what is good value to him. Forsyth, even Mustafi. The same Arsenal fans wanting to get rid of Mustafi should ask themselves did our defense improve without Mustafi against Wolves or for the matter against Chelsea? We shipped over 3 goals in both matches and that is not solely due to Ozil. The same fans also scapegoated Flamini previously. He left and our midfield did not get much better. In fact when in his last season he was replaced by Coquelin, we were worse shipping 14 goals in a stretch of 7 matches.… Read more »

So you’re saying we should keep Özil and mustafi, and we should have never let flamini leave

I take it that you’re talking bristly end first with that broom?

What is Shads transfer value on the open market? He is after all a world cup winner! He’s a good age to, currently 45 until June 8th when he will then be 46 (and over the hill fitness wise)
I bet we could get more money from Milan for him than we could for Mustafi.