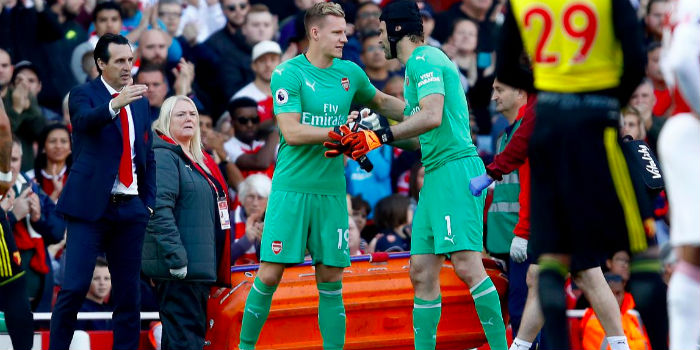 Bernd Leno says he respects Petr Cech enormously, and that the pair get on very well together, but if asked to play in Wednesday night’s Europa League final he wouldn’t turn down the chance due to sentimentality.

The veteran keeper is set to play the final game of an illustrious career against his former club in Baku tomorrow night, and it’s widely expected he’ll start. However, the German wouldn’t let that get in the way of his chance to play in a final if asked by boss Unai Emery.

Speaking to kicker magazine, he said, “In the Premier League it’s clear that I’m the number one. In the Europa League, Petr Cech has almost always played.

“That’s normal here in England and by some clubs it’s the same in the cup. I prepare the same way as normal, as if I’m going to play. But you also need to be prepared for the coach to say: “No, it’s the last game in (Cech’s) career.”

“You have to accept that. But it still isn’t clear who will play. Either way, I just hope we win, no matter who is in goal.”

As for his relationship with the 37 year old, he continued, “I have great respect for Petr Cech and we get along really well. He deserves any and all recognition.

“Still, I’m a professional sportsman, I always want to play, especially in a final. It would be the completely wrong time to have a guilty conscience.

“It’s a huge game for Arsenal, I absolutely wouldn’t say: ‘I’d rather not play.’ I’m pumped to play, that’s my mindset.”

It’s hard to argue with that, and we’ll wait and see what Emery does tomorrow evening.

We’ll have a full transcript of Leno’s interview later this morning.

Cech is too good a professional to deliberately or otherwise sentimentally play poor in a Cup Final against his old Love…… But I’ve to admit whosoever leaked the fact that he will be given a crucial role next season in Chelski is nothing sort of an attempt to put pressure on him and also perhaps to undermine his character…..

Totally agree. I’ve had a long think over the last few days. Go with Cech. He is our EL keeper and done nothing wrong throughout.

As if a professional like Cech is going to want to lose his last ever chance of winning a medal.

Our accountant is a very honest person, our company does not require any auditing process. What do you think about such statement?Organizations must just be systematic about conflicts of interest. What is professional is avoiding the case-by-case approach. Should an Italian referee known to be very professional be the referee in a WC final between Italy and Argentina ?

Snowflakes trying to sabotage our Champions League qualifications on the basis of sentiment by constantly defending soon to be enemy Cech. No, I don’t believe he will be unprofessional but the conflict of interest especially regarding his future and the history of his career on an emotional day will surely get to him. Catastrophically for us in this instance. And then he’ll move on to boardroom things at Chelsea while we suffer another awful with the likes Man United and other mediocre teams in the Thursday night jive

Cech will save a penalty in the final!

Let’s hope it won’t get to it. Just 2 goals scored, clean sheet and uneventful evening for Petr.

It’s a final where winning means obviously so much to us. For me ,the coach has the responsibility of playing the best team possible and if that means leaving any player on the bench, including Cech,so be it.
I’d love to see Cech in goal playing a blinder to help us win but we mustn’t put pressure on Emery to pick him for sentimental reasons.
If Leno is the best option, play him.

It’s so ironic that Emery has been shredded all season for not knowing or not playing his best team. And now in our biggest game for years people are seriously telling Emery to play a weakened team. Utter madness

Fortunately both Leno and Cech are match-winning keepers. But there is no good logical argument for the back-up keeper starting this game

Cech is far better than a backup keeper. He’s kept brilliantly in all the rounds of the Europa league and must be given a chance to win a final honour after such a great career

Sure, except this isn’t a testimonial game for Petr Cech. Our sole objective is to win the Final.

Which is the better penalty saver? Interesting if it went to penalties if goalie was subbed…..

If Cech is this top chap that everyone seems to suggest, I wonder if he might actually make the call himself and stand aside for Leno?

I would really love to see that. Make life easier for everyone.

Don’t be ridiculous. Cech has a winning mentality and still believes he can win a final medal. Do you really think he would stand aside and miss his final match.

Why the hell would be do that? People are acting like Cech is suddenly some muppet in goal when is provably one of the best of the Premier League era. He’s a great keeper and if he’s picked he will do great, just like in every other Europa League match this season. Leno might be our future, but today Cech is no worse. He also has a big game mentality and more experience of big occasions like this than anyone else in our squad.

I have had enough of football now. My legends had enough football now. They worked throughout their lives for the fans, working each hour of every single day to make their teams champions but what the fans give them is disrespect. I won’t attack Arsenal or Chelsea fans but I will like to say that what they did to Cech is not acceptable. This is a trick played by Chelsea and their fans to aggravate the situation in the arsenal dressing room and put pressure on Emery and Cech. I can’t believe they did it to win UEL when the… Read more »

Unai Emery should be make the most appropriate decision by playing Leno in goal.
If we win, then Cech will still get his last winning medal as a professional player.
If we lose, Cech’s reputation will still be intact as he is not directly involved in the game and there is no controversy surrounding any of the goals conceded.
anyway in my honest opinion…Leno is a better GK then Cech. So that alone, Unai should play him.

Not long before Martin tells us that Leno has been shaky lately & Cech is a better option….

Martin
Reply to  Kwame Ampadu Down

Well Cech has played in a European final and has the big match temperament and yes it’s true in the past few matches we’ve seen Leno’s weakness at dealing with crosses so yes I would feel safer playing Cech in the final. I didn’t want to disappoint you

Kwame Ampadu Down
Reply to  Martin

Last two matches for Leno : Brighton & Burnley. Nothing shaky at all…….
I just find it hilarious that you will not accept how well Leno has done & criticise him at every chance you get….but yet you complain bitterly anytime anyone says anything about Ozil & how ‘unfair’ it is.

I will be surprised if Emery plays Cech, at the time of playing Cech in semi’s we had it in our own hands to make CL before we capitulated, that cushion of maybe going out of EL cup was thrown out of the window its now too important to lose this game, hes had the balls to hook ozil off in most games this season so I can’t see why he would leave us even 1% weaker for this game. Cech a top pro is a Chelsea legend, he was moved on when he came to us for a reason,… Read more »